"A sickly green creature with sharp little horns had its face pressed against the glass, pulling faces and flexing its long, spindly fingers."
—Description[src]

A Grindylow is a small, horned, pale-green water demon and a Dark creature.

Newton Scamander had several Grindylows in his suitcase during his travels to New York in 1926.

Professor Remus Lupin ordered a Grindylow in 1993 for his third year class to study for Defence Against the Dark Arts. After his resignation, he left behind the tank in which the Grindylow was kept.[4]

One year later, the Grindylows of the Black Lake at Hogwarts School of Witchcraft and Wizardry attacked the students competing in the 1994-1995 Triwizard Tournament. They caused the early retirement from the task of Fleur Delacour, and harassed Harry Potter.

Aggressive towards witches, wizards and muggles alike, the Grindylow has only ever been tamed by merpeople; the half-fish beings keep them as pets.

Grindylows survive, for the most part, on fish, algae, and small sea creatures; however, occasionally they will eat humans (it is for this reason that they are classified as dark creatures).

These creatures are found in the weed beds at the bottom of lakes in Great Britain and Ireland.

The Grindylow is a sickly green colour, with green teeth and small pointy horns on its head. It has long, strong (albeit brittle) fingers which it uses to strangle its prey, and is a rather good swimmer.

The Grindylow has long, brittle fingers which despite their fragility are rather strong. The trick to escaping a Grindylow is to break their grip on a person; it can also be noted that the Revulsion Jinx may help with this task, as underwater it shoots jets of boiling hot water. 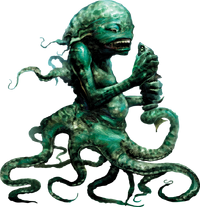 Retrieved from "https://harrypotter.fandom.com/wiki/Grindylow?oldid=1054999"
*Disclosure: Some of the links above are affiliate links, meaning, at no additional cost to you, Fandom will earn a commission if you click through and make a purchase. Community content is available under CC-BY-SA unless otherwise noted.