"Once you’ve arrived inside Gryffindor Tower, come inside and be welcomed by the roaring fire, stuffed armchairs, and the great view we have from our windows. Our dormitories are reached by climbing the winding mahogany staircase, decorated with crimson and gold. As I said, there's plenty of gold around the tower. Our four-posters are covered with thick scarlet blankets (we have quite windy nights up in the towers) and are embroidered with gold. Gold chandeliers cast warm glows all around."
—Description of the tower[src]

Gryffindor Common Room served as a Common room for Gryffindor House at Hogwarts School of Witchcraft and Wizardry. In general, it sported several shades of red and gold. The fireplace mantle was adorned with a portrait of a lion (associated with the house) and the room was described as being 'cosy'.[1]

The entrance to the Gryffindor common room was concealed under the portrait of the Fat Lady, on the lavish Gryffindor Landing.[1]

To enter one had to present the Fat Lady with the correct password of the week.[1] However, getting the password wrong meant the student would have to wait the day for another student to come by and pass them the code.[2] 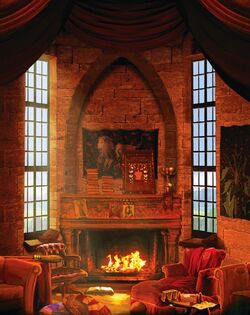 "...the portrait swung forward to reveal a round hole in the wall. They all scrambled through it — and found themselves in the Gryffindor common room, a cosy, round room full of squashy armchairs."
—Description of the common room[src]

There were many windows that looked out onto the grounds of the school, and a large fireplace dominated one wall. The mantle of the fireplace was adorned with a portrait of a lion. The fireplace was also connected to the Floo Network, but as it was extremely public except in the dead of night. The walls were decorated with scarlet tapestries that depicted witches and wizards, but also various animals. There were also bookcases located in the room, filled with various novels.[2][1]

The common room was usually where celebration parties were held after Gryffindor Quidditch victories, or when Harry Potter completed the first task for the Triwizard Tournament.[4] It was also the location for Harry and Ginny Weasley's first kiss following Gryffindor's Quidditch Cup victory in 1997.[5] The common room fireplace was used on several occasions by Sirius Black to contact Harry while he was on the run from the Ministry of Magic.[6][7]

Retrieved from "https://harrypotter.fandom.com/wiki/Gryffindor_Common_Room?oldid=1410800"
*Disclosure: Some of the links above are affiliate links, meaning, at no additional cost to you, Fandom will earn a commission if you click through and make a purchase. Community content is available under CC-BY-SA unless otherwise noted.