Rubeus Hagrid: "What're you doin' here? Get outta my house!"
Lucius Malfoy: "My dear man, please believe me, I have no pleasure at all in being inside your — er — d'you call this a house?"
— Lucius Malfoy showing discontent towards Hagrid's home[src]

Hagrid's Hut[5] served as a home to Rubeus Hagrid (and some of his pets, including Fang) during his years as Gamekeeper and teaching at Hogwarts School of Witchcraft and Wizardry.[1] It is a small wooden cabin located outside of Hogwarts Castle, on the edge of the Forbidden Forest.[6] Harry Potter, Hermione Granger and Ron Weasley were amongst the Hogwarts students who regularly visited Hagrid in his hut.[1][2]

At some point in or before the 1980s, Hagrid tried using the Fire-Breathing Potion, and his hut nearly burned down.[7]

The 1991–1992 school year was Harry Potter's first year in Hogwarts, along with Ron Weasley and Hermione Granger. They visited Hagrid's hut occasionally and in April of 1992, the trio saw a dragon, a Norwegian Ridgeback, for the first time which hatched from an egg. Hagrid named it Norbert.[2]

On the same night, they noticed Draco Malfoy sneaking from the window of Hagrid's hut and listening to their discussion.[2] The four students received detention for being out of bed late at night. As punishment, they had to go to the Forbidden Forest with Hagrid. Argus Filch escorted the four from the castle to Hagrid's cabin and they split into two groups.[8]

Minister for Magic, Cornelius Fudge and Draco's father, Lucius Malfoy along with Prof. Dumbledore visited the hut to discuss the incident of the re-opening of the Chamber of Secrets. The Ministry decided to send Hagrid to Azkaban prison. They assumed that Hagrid was the one who re-opened the Chamber. Unnoticed by the Minister and Draco's father, Harry and Ron hid inside the Invisibility cloak and were present in Hagrid's hut. Before Hagrid's departure, he instructed Ron and Harry to "...follow the spiders." and reminded them to feed Fang.[9]

Headmaster Dumbledore revisited the hut to inform Hagrid that he would replace Professor Kettleburn after he retired in teaching the Care of Magical Creatures subject. This job was one Hagrid had always wanted.[10]

Cornelius Fudge, still Minister for Magic at the time, revisited the hut, now with Walden Macnair to attend the execution of Buckbeak the Hippogriff after the creature had injured Draco Malfoy's arm along with Dumbledore and an elderly member from the Committee for the Disposal of Dangerous Creatures.[11]

Shortly after the Harry and Hermione from the future saved Buckbeak, and Hagrid and the rest headed to Hogwarts Castle, they and Buckbeak headed back to Hagrid's empty cabin as a place to hide for their own safety after Remus Lupin transformed into his werewolf form until it was safe to return to the Forbidden Forest.[12]

In one lesson of Care of Magical Creatures, Hagrid introduced to the Gryffindor and Slytherin students his newly bred beasts called Blast-Ended Skrewts in front of his hut. Hundred of these creatures were placed in several open wooden crates.[6]

The creatures looked like deformed, shell-less lobsters, horribly pale and slimy-looking, with legs sticking out in very odd places and no visible heads, about six inches long, crawling over one another, bumping blindly into the sides of the boxes. They gave off a very powerful smell of rotting fish. Draco Malfoy questioned Hagrid about the purposes of those creatures.[6]

In the first quarter of the 1995–1996 school year at Hogwarts, the Ministry appointed Dolores Umbridge as the new Defence Against the Dark Arts professor. Professor Dumbledore sent Hagrid in search of other Giants. When he came back to Hogwarts, Dolores Umbridge visited Hagrid's hut to ask Hagrid where he had been and to him ask what sort of mission he had been sent on. As Umbridge had a strong dislike of Half-breeds, including Half-giants, she wanted to sack Hagrid from Hogwarts.[13]

Umbridge succeeded in doing so when she became headmistress (replacing Prof. Dumbledore as Headmaster). Near the end of the school year, Hagrid was forcibly removed from the Hogwarts grounds by Umbridge with the assistance of some corrupt Ministry of Magic Aurors, including John Dawlish.[14] However, upon Umbridge's removal from Hogwarts, and Dumbledore's reinstatement as Headmaster, Hagrid was welcomed back to his post of Care of Magical Creatures teacher and Keeper of Keys and Grounds.[15]

In 1997, Hagrid's pet Acromantula Aragog died of ill health. Hagrid held a funeral for Aragog outside his hut, which was attended by himself, Harry Potter, Horace Slughorn and Fang. Slughorn did a eulogy for Aragog and buried him in the earth, and afterwards they all went inside and drank some alcohol. Harry, who was under the influence of Felix Felicis, also managed to successfully persuade Slughorn to give him his memory of Slughorn informing a young Tom Riddle about Horcruxes.[16]

Before the end of the 1996–1997 school year, Death Eaters managed to penetrate the walls of Hogwarts Castle, with the help of Draco Malfoy.[17] Professor Snape escorted the Death Eaters to fulfil the mission appointed to him. After he cast the Killing Curse on Professor Dumbledore, Harry chased him and the Death Eaters, who were now joined by Draco Malfoy, until they reached the grounds outside of the castle. They continually fought until Death Eater Thorfinn Rowle used the Fire-Making Spell, which set fire to Hagrid's hut with an explosive bang. Hagrid was forced to rescue his dog Fang who had been trapped inside the hut. The Death Eaters then disapparated. Hagrid together with Harry used the Water-Making Spell to put out the flames burning Hagrid's hut.[18]

Hagrid's Hut was repaired after the fire. During the 1997–1998 school year, in which Hogwarts was under the control of the Death Eaters, Hagrid held a "Support Harry Potter" party in his hut which forced him into hiding.[19]

"There was only one room inside. Hams and pheasants were hanging from the ceiling, a copper kettle was boiling on the open fire, and in the corner stood a massive bed with a patchwork quilt over it."
— The interior of Hagrid's hut[src]

There is only one room inside, with hams and pheasants hanging from the ceiling. There is also a fireplace where, most of the time, a copper kettle is used to boil water. In the corner stands a massive bed with a patchwork quilt over it.[1] Sometimes, when Hagrid does not use his personal belongings, including his pink umbrella, his moleskin coat, and his crossbow, he keeps those items inside the hut.[9] Other items found inside the hut are ingredients for foods and items used by him in teaching the Care of Magical Creatures.[3] 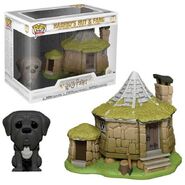 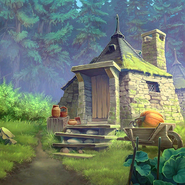 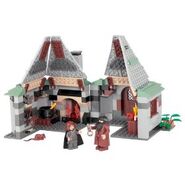 The Harry Potter Wiki has 148 images related to Hagrid's Hut.

Deutsch Español Français Italiano Norsk Polski Português do Brasil Русский 中文
*Disclosure: Some of the links above are affiliate links, meaning, at no additional cost to you, Fandom will earn a commission if you click through and make a purchase. Community content is available under CC-BY-SA unless otherwise noted.
Advertisement