Hagrid's Magical Creatures Motorbike Adventure is an upcoming rollercoaster attraction at The Wizarding World of Harry Potter at Universal Studios, Orlando. The ride will open on June 13, 2019. The attraction will replace Dragon Challenge, and will take guests on a flying motorbike tour of the Forbidden Forest led by Rubeus Hagrid, and encountering the various magical creatures within. The attraction will be located at The Wizarding World of Harry Potter — Hogsmeade on Universal's Islands of Adventure.

Hagrid's Magical Creatures Motorbike Adventure allows guests to join Rubeus Hagrid on a journey into the mysterious Forbidden Forest. Guided by Hagrid, guests fly deep into the Forbidden Forest to brave the mysteries and thrills beyond the grounds of Hogwarts Castle. The attraction will combine storytelling and innovative rollercoaster technology, and includes fully detailed and rich sets such as an actual forest with more than 1,200 live trees.

Guests joining the attraction will first join Hagrid's Care of Magical Creatures class and board enchanted motorbikes that will take them closer to some of the wizarding world's most dangerous magical creatures. Guests will either ride the motorbike or board the sidecar and the motorbikes are designed to give the riders the freedom of flight. The guest experience will differ depending on which part of the motorbike you are riding in. The rollercoaster itself is a free-wheeling ride which twists, turns and rushes forward and backward at speeds of up to 50 mph. As the rollercoaster proceeds through the Forbidden Forest, guests will get closer to magical creatures such as Centaurs, Cornish Pixies, Fluffy, and a Blast-Ended Skrewt. Guests will experience challenging obstacles such as becoming entangled in Devil's Snare, and encounter quite a few surprises along the way.

Entering the ruins of an old cathedral at the edge of the Forbidden Forest to get to class, Hagrid introduces his Forbidden Forest field trip plan with Arthur Weasley, who has helped fix Sirius Black's motorcycle and use multiple spells to duplicate it and allow it to fly autonomously. During the talk, a cage of Cornish Pixies is knocked over, allowing them to spread across the forest, leaving Hagrid and Arthur to go after them.

As the motorcycles leave the loading area and zip through the ruins and trees of the forest, the riders enter a ruined shed where Hagrid tries to calm a Blast-Ended Skrewt. After flying through the cathedral's empty windows rides go through the second launch. Fluffy can be found eating a bone in a cave to the left of the brakes. Riders see the Flying Ford Anglia commandeered by Cornish Pixies before going through a foggy tunnel and flying up to a dead end, where Hagrid tells us the motorbikes have lost power before casting Reparo to fix them. The vehicles begin flying backwards and enter a dark tunnel in a denser part of the forest where a Centaur watches the bikes. Becoming caught in a Devil's Snare, Hagrid has them cast Lumos Solem to escape, though more Blast-Ended Skrewts arrive and begin firing, prompting a quick escape. As they make it back to the ruins, they pass a Unicorn and her foal before returning back to the loading station. 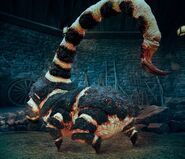 Retrieved from "https://harrypotter.fandom.com/wiki/Hagrid%27s_Magical_Creatures_Motorbike_Adventure?oldid=1252702"
*Disclosure: Some of the links above are affiliate links, meaning, at no additional cost to you, Fandom will earn a commission if you click through and make a purchase. Community content is available under CC-BY-SA unless otherwise noted.