Harry Potter: Magic Awakened is a mobile game for iOS and Android currently available in Chinese Mainland, Hong Kong, Macau and Taiwan regions.[2] It combines RPG story-telling and card-based combat and its story starts ten years after the Battle of Hogwarts.[4]

The game was developed by Warner Bros. and NetEase under the Portkey Games umbrella and was first announced on 30 October, 2019. It was released in Chinese Mainland, Hong Kong, Macau and Taiwan regions on 9 September, 2021,[1] and will be released worldwide in 2022.[2][3]

Ten years after Harry Potter's legendary victory over Lord Voldemort at the Battle of Hogwarts,[4] a young Muggle-born receives an unexpected visit from a giant of a man by the name of Rubeus Hagrid, who has come to deliver their letter of acceptance to attend Hogwarts School of Witchcraft and Wizardry. Hagrid explains to them about the existence of the wizarding world and accompanies them to Diagon Alley where they purchase necessary supplies for their first year. Upon arriving, however, a mystery begins to unfold on the grounds when one of the first years, Ivy Warrington, goes mysteriously missing after the Sorting Ceremony. The player thus starts their numerous adventures at Hogwarts by finding Ivy first.

Players will be able to customise their character, select their Hogwarts House, attend lessons, explore Hogwarts, and join the Duelling Club. The core of Magic Awakened's gameplay is a digital-collectible card-based RTS in which spells are in the form of cards obtainable from gacha spins. The game also features ballroom dancing styled by rhythm-action gameplay as well as Quidditch matches fashioned in interactive tap-to-dodge mechanics. House competitions are also introduced in Magic Awakened. House rivalry matches are held twice a day, ranging from duels to group challenges. 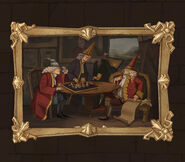