The game does not state it explicitly, but the rosters and the fact that the World Cup follows the Hogwarts school year in this game indicates that the game is set during Harry Potter's third year, the 1993–1994 school year. Furthermore, because the books have not named all of the members of the Hogwarts House teams, the video game has filled in the gaps as follows, circa Harry's third year. It is possible that J. K. Rowling provided the names, as she has been known to participate in multimedia projects, such as the Harry Potter Trading Card Game.

Among the unique features of Harry Potter: Quidditch World Cup is the ability to control Chasers. In fact, most of the gameplay in terms of time centres around the Chasers and Keepers.

Aside from basic flying, Chasers can direct passes and shots using the Control Stick and also charge shots, passes and tackles. After each goal, play restarts by having the Keeper of the team who just conceded passing the Quaffle back into play as the 10 points (more in case of multi-goal Team Special Moves) are tallied.

At the top of the screen and attached to both teams' scores is a Golden Snitch gauge, signalling both the teams' relative momentum and how close the climactic Snitch chase is. Teams can build this bar by completing basic passes, with charged passes generating more. The fastest way of doing this is by completing Combos – a special series of passes where the player can pass or shoot the Quaffle with a volley. Combos cap at 8 (with the counter listed onscreen) and the momentum generated is banked either after the player is not dispossessed after a period of time following the last pass or after the player scores.

As the player progresses in the House Quidditch Cup and completes more drills, he or she also unlocks more features that also charge with momentum banked in the Snitch gauge:

The introduction features Harry and Oliver Wood dressed in their Gryffindor Quidditch team uniforms instructing the player on the basic rules and objectives of Quidditch. The player then chooses a House to play for in the Hogwarts Quidditch Cup by picking that team's Seeker. This Seeker (Harry Potter, Cedric Diggory, Cho Chang, or Draco Malfoy) then also offers tips, reminders, and status updates on the team's performance during the course of the game. Afterwards, the player competes in the Hogwarts Quidditch Cup, and when winning, the Quidditch World Cup.

Once the player chooses a House, the Seeker leads the player to the rest of the team. As in the books, the House Quidditch Cup is round-robin, but instead of dropping the player into a game with all features enabled, the features are introduced one by one through drills with the House team members, and drills must be completed before matches unlock. Firstly, two of the Chasers lead the player in passing and tackling/shooting drills before the Seeker leads the player (with the help of Madam Rolanda Hooch) in catching a Golden Snidget as Snitch-catching practise. At this point, the first House Quidditch Cup match is unlocked.

Following the second match, the team's Keeper leads the player in a Combo drill, after which the final match is unlocked with all features enabled. After the final match, Albus Dumbledore, flanked by the Heads of Houses, awards the Quidditch Cup to the winning House, along with tickets to the Quidditch World Cup, as the victors celebrate and commemorate the moment with a wizard photograph that is framed in their House's common room.

The standings (and subsequently the winners as well) are determined not by wins and losses but by total points, which is also in effect during the World Cup.

"Ready for a match against Gryffindor, eh? Let us play for the Quidditch Cup!"
— Harry Potter, representing the Gryffindor Quidditch team

Gryffindor's Team Special Move is called the Weasley Wangler. Alicia starts with the Quaffle with Fred and George flying in front of Alicia in an inverted V shape, and the Weasley Twins corral an oncoming Bludger and hit it back and forth between them to cover for Alicia. This scares off the opposing passing and special move Chasers, and the opposing Keeper is helpless to stop the Bludger hitting him as Alicia then scores into an open hoop and catches it on the other side.

"Ready for a match against Ravenclaw, are you? We'll see just how ready you really are! Let's play for the Quidditch Cup!"
— Cho Chang, representing the Ravenclaw Quidditch team

Ravenclaw's Team Special Move, The Burdish of Raven, is the most offensively powerful of all the teams – even the national ones – as it is the only one that scores three times. First, the 3 chasers go up in the air, the passing and special move chasers gaze in awe as they loop and go down, as they pass, Davies punches the special move chaser, Burrow kicks the passing chaser, leaving the way clear for Stretton to shoot, then Burrow scores, and finally, Davies scores.

"So you'd like a match with Hufflepuff, would you? Let's play for the Quidditch Cup, and may the best team win!"
— Cedric Diggory, representing the Hufflepuff Quidditch team

The Cedric Swoop'n'Swagger is quite a long move. First, they are in possession of the quaffle, when the passing and special move chasers from the other team are in hot pursuit of it. Preece fires the quaffle to Macavoy, avoiding the passing chaser, then Macavoy passes it to Applebee, who passes it to Macavoy who avoids the special move chaser, then she passes it to Preece who does a ground shot which the force lifts it up into the air so it goes in a hoop, then Macavoy passes it to Applebee, then she scores.

"You think you're good enough to beat Slytherin?! Not in this lifetime! Let's play for the Quidditch Cup!"
— Draco Malfoy, representing the Slytherin Quidditch team

Note: Kevin Bletchley is the name given in software, but it may be meant to be Miles Bletchley.

The Zeeburger Slither is very brutal. All the players, except Malfoy and Bletchley knock the opponent passing and special move chasers out of the way with the tackle and shoot chaser screaming, then they use cobbing on the keeper (no penalty), Then Montague scores, Pucey kicks it to Flint, who scores it again.

Additionally, Edgar Cloggs, a ghost who haunts the Quidditch pitch, would be a training partner in Tackle & Shoot / Special Move drills.

The Hogwarts Quidditch Cup champions not only get to attend the Quidditch World Cup, but they also choose a team to support during a 16-game home-and-away round robin league campaign, with the team playing every other opponent twice – once at home and once at the other team's stadium. At this point, the player can also change the difficulty level, something that is not available during the Hogwarts Quidditch Cup. Each difficulty level corresponds to a broom. In ascending order of speed and difficulty: Comet 260, Nimbus 2000, Nimbus 2001 and Firebolt.

One of the unlockables in the game is the first appearance of the site of Quidditch's invention, Queerditch Marsh. This pitch is sloppily defined by a faded white oval on a relatively flat area of English marshland. Rickety stands rise from the oval's edges. Instead of constructed goal hoops, Chasers throw the Quaffle through large birds' nests in the two trees on either end of the pitch. A thin brook runs across the length of the oval.

Only Hogwarts teams may play on Queerditch Marsh. 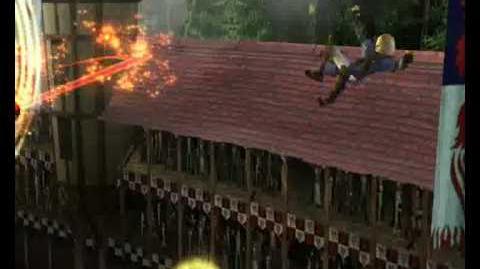 Deutsch Español Polski Português do Brasil Русский
*Disclosure: Some of the links above are affiliate links, meaning, at no additional cost to you, Fandom will earn a commission if you click through and make a purchase. Community content is available under CC-BY-SA unless otherwise noted.
Advertisement