It was introduced in November 2001, and, like the base set, its 80 cards were based on scenes from Harry Potter and the Philosopher's Stone book by J. K. Rowling. This expansion introduced the Quidditch lesson type and Match cards. 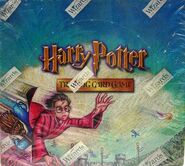