"Limited and Numbered"
—The statement of the Wizard's Collection

The Harry Potter Wizard's Collection box set is the biggest Harry Potter collection in history.[1] It contains 31 discs, one of the horcruxes, a map of Hogwarts and its surroundings, and much, much more.

Map of Hogwarts, concept art prints, catalogues of props and posters, all designed by the graphic designers from the films are exclusive to the set, and each item along with the rest of the contents of this epic collection will be revealed each week on harrypotter.com

Year 3 –Harry Potter and the Prisoner of Azkaban™

Year 4 –Harry Potter and the Goblet of Fire™

Year 5 - Harry Potter and the Order of the Phoenix™

Meet the stunt doubles for Dan, Rupert and Emma as they demonstrate how they balanced major stunt work with seamlessly mimicking the actors they represented, and share their favourite moments.

This 48-page rigid book was created by MinaLima Design: Eduardo Lima, Miraphora Mina and Lauren Wakefield, former graphic designers on the Harry Potter films. Filled with their favourite props from the films designed in "shadow boxes," this stunning catalogue can only be found in the Wizard's Collection. 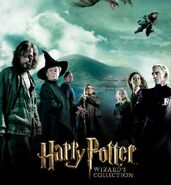 Years 6-7
Add a photo to this gallery

Entertainment Weekly reviewed the Harry Potter Wizard's Collection in its September 7, 2012 (Volume 1223) issue, stating "though expensive" it "is pure magic for fans" and that while it "would be an amazing starter kit for newbies if it weren't so darn expensive... For hardcore fans with large allowances, the set is an irresistible collectible."[2]

Retrieved from "https://harrypotter.fandom.com/wiki/Harry_Potter_Wizard%27s_Collection?oldid=1259442"
*Disclosure: Some of the links above are affiliate links, meaning, at no additional cost to you, Fandom will earn a commission if you click through and make a purchase. Community content is available under CC-BY-SA unless otherwise noted.