Harry Potter, Ronald Weasley, and Hermione Granger must venture out into the Wizarding World on their own to destroy Lord Voldemort's remaining Horcruxes. On their journey, they will encounter numerous dangers including Death Eaters, Snatchers, and so much more. Luckily for the trio, they may pick up on a few spells and potions on their way. Even so, nowhere is safe...no one can be trusted...the battle has begun.

EA has stated that the gameplay is similar to Harry Potter and the Goblet of Fire. It is an action video game, not a video game of making potions, playing Quidditch or exploring Hogwarts. There is no RPG iteration of the game, unlike with previous titles. Unlike the previous instalments, there is not much room to "run around" such as in the fifth and sixth game, where you were allowed to move freely within the castle and on the grounds. This will be more like an action and adventure game. Unlike previous titles where you rarely fought Death Eaters, you will fight hundreds of them, as well as Snatchers, in this game. Along with said Death Eaters, you can also fight creatures, such as Giant Spiders, Dragons, Doxies, Whomping Willows, and Dementors. EA has also stated that it is to be a third-person shooter. You play as Harry for the duration of the game, but in most levels Ron and Hermione fight with you. You can use the Invisibility cloak, Polyjuice Potion, and Peruvian Instant Darkness Powder for missions like the raid to the Ministry of Magic. You can use Exploding Potion and Garrotting Gas to attack your opponents, or the Elixir of Life to restore your health, as well as Murtlap Essence and Blood Replenishing Potion to heal minor and major injuries respectively. Felix Felicis can be used to increase your luck. You can also find radios with channel Potterwatch around, and newspapers, The Quibbler and The Daily Prophet, to keep posted on events in the Wizarding World. 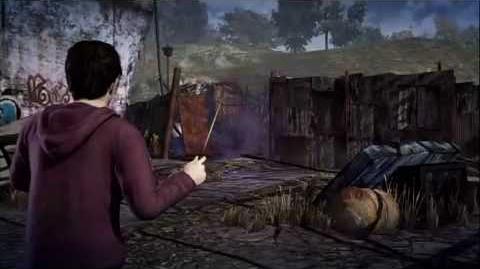 Harry Potter and the Deathly Hallows
Official Gameplay of the game. 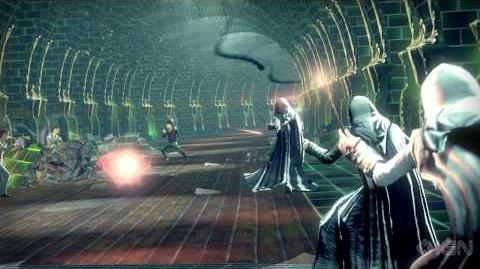 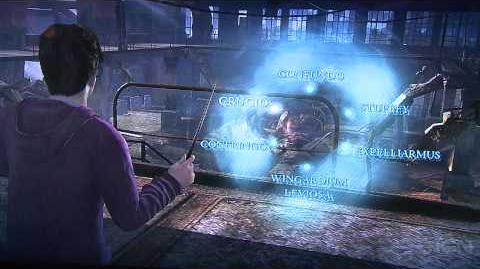