This article is about the film. You may be looking for the novel of the same name.

Harry Potter and the Deathly Hallows

Harry Potter and the Deathly Hallows (film) or (Part 2)

Harry: "What do you know about the Deathly Hallows?"
Ollivander: "It is rumoured there are three. To possess them all is to make oneself immortal. But few truly believe that such objects exist. If it is true — you really don't stand a chance."
— First spoken dialogue from Deathly Hallows in a snippet-trailer.[src]

Harry Potter and the Deathly Hallows will be the final two films of the Harry Potter film series, based on the seventh book by J. K. Rowling. Due to the length of the story and a desire by the filmmakers to be more faithful to the novel, it will be split into two parts:

Harry Potter and the Deathly Hallows: Part I is the first film, covering the story from the beginning to the trio's capture by Snatchers.

Harry Potter and the Deathly Hallows: Part II is the second film, covering the story from the Skirmish at Malfoy Manor to the Epilogue.

A two-part film adaptation of Harry Potter and the Deathly Hallows is planned. The film is to be split in two, with David Yates, who directed the preceding two films, directing both parts. The first part will be released in November 2010, and the second in July 2011.[2] The films will be shot back-to-back,[3] and treated as if it were one film.[4] The idea to split the films had been around since the middle of 2007,[1] but only really came into serious consideration after producer David Heyman was able to talk to writer Steve Kloves when the 2007–2008 Writers Guild of America strike ended and Heyman had Rowling's approval.[4] As of April 2009, Kloves is working on the script of second part.[5]

On March 12, 2008, Warner Bros. confirmed that the movie would be split into two, to do justice to the book.[6]David Yates, director of Order of the Phoenix and Half-Blood Prince will return to direct and Steve Kloves is going to write the screenplay. According to Warner Bros. executive Alan F. Horn it will allow "an extra hour and a half to celebrate what this franchise has been and do justice to all the words and ideas in the amazing story."[3] Heyman described the workings behind the split: "Deathly Hallows is so rich, the story so dense and there is so much that is resolved that, after discussing it with Rowling, we came to the conclusion that two parts were needed."[3] Due to the WGA strike, Kloves was not able to start work on the script until it ended.[7]

Before David Yates was officially chosen to direct the film, others had expressed an interest in the job. Alfonso Cuarón, director of Harry Potter and the Prisoner of Azkaban, had said that he would be "tempted" to return to direct.[8]Guillermo del Toro, who passed on Prisoner of Azkaban, had expressed interest in directing Deathly Hallows,[9] but an increased workload ruled him out of the project.[10]

Heyman noted that the films will be a closer recreation of the books than the previous films because of the length a two-part adaptation entails.[5]Daniel Radcliffe said: "This is a road movie, particularly in Part One of the film. People have been so used to seeing Harry Potter at Hogwarts and we're just not there for the first part of the film. That seems to have really freshened things up, and hopefully will get people seeing the films with fresh eyes again, because its just a totally different look when you're not just sat in the same room the whole time."[5]

Although Yates had retained composer Nicholas Hooper for Half-Blood Prince, John Williams (who composed the scores to the first three films) had expressed interest in returning to score the film - however he did not state which part he would be contributing to. In January 2010 Alexandre Desplat, a french composer, was confirmed to produce the score for Harry Potter and the Deathly Hallows: Part I. [11]

Yates and Heyman have noted that some of the events of this film had an effect on the way the sixth film was written.[12]

The first part of Deathly Hallows will end as the trio are captured by the Snatchers, the second part of film begins as they arrive at the Malfoy Manor.[13]

Daniel Radcliffe pretended to scare the fans when he said "There will be two films for Hallows, and if there isn't, I'm not returning to play Harry Potter."

The reason for two parts or films as David Heyman has stated is so there will be no major cuts in characters and scenes. This allows the adaptation to be more in depth than the other six films. It has been announced that these parts will be in 3-D in theaters after the success of Avatar.[14]

thumb|350px|right|Pictures Taken Of Cast and Locations

Pre-production began on January 26, 2009, and filming began on February 19, 2009 at Leavesden Film Studios, where the previous six films had been shot, and Pinewood Studios.[15][16] Eduardo Serra is the cinematographer.[17] Yates said that the film will be shot "with loads of hand-held cameras. I want to shake things up every time I go into this world. I like experimenting as we go along."[18]

During production at Leavesden, Radcliffe's stunt double David Holmes suffered a serious spinal injury, during filming of an aerial sequence. Holmes fell to the ground following an explosion which was part of the stunt.[19][20][21][22] It is probable that the aerial sequence and explosion is the Battle over Little Whinging. This left Holmes paralyzed from the waist down and it is reported he will be unable to ever walk again.[23]

David Heyman revealed work will begin in early 2009 on the seventh movie in the series.
"We finished the sixth film which'll be coming out next summer and we start filming the seventh which we'll be breaking into two parts for a 54 week shoot starting in February (2009)."[24][25]

Test shoots were done on January 26, 2009 as Emma Watson revealed on her Official Website. [26][27] Unfortunately, just days later it was reported that a stunt double for Daniel Radcliffe was seriously injured while testing an explosion scene.[28]

Hundreds of Photos of Daniel Radcliffe, Emma Watson and Rupert Grint including the crew & staff & 200+ extras for the film production has been released on the net during shooting hours from midnight to 6 a.m. and on the next day, April 22. [32][33][34]

John Williams said he is confident he will return for Harry Potter and the Deathly Hallows, although he did not say which part he would be contributing. There is not yet an official announcement made by WB or John Williams himself. [44]


Nicholas Hooper (who composed the soundtracks for Order of the Phoenix and Half-Blood Prince) said he will not return for the last two Harry Potter films.[45]

In January 2010, Alexandre Desplat, a french composer, was confirmed to produce the score for Harry Potter and the Deathly Hallows: Part I.[46]

Casting for the following have not been announced yet (therefore it is not 100% certain that these characters will appear in the films):

John Cleese, however, will not reprise his role as Nearly Headless Nick, Nina Young as of now, will not return as the Grey Lady.

Other students roles may be reprised by their respective actors as well, such as Freddie Stroma as Cormac McLaggen, Louis Doyle as Ernie Macmillan, Charlotte Skeoch as Hannah Abbott, Edward Randell as Justin Finch-Fletchley, Ryan Nelson as Michael Corner, Nick Shirm as Zacharias Smith, and Eleanor Columbus as Susan Bones (who is unlikely to appear due to the fact that she is an American and her father is not directing the movies).

Rik Mayall who portrayed Peeves the Poltergeist in a deleted scene from the first movie could make his only appearance at the Battle of Hogwarts.

During an interview on the "Paul O’Grady Show" Zoë Wanamaker said she was disappointed that she was never asked to return as Madam Hooch and wouldn't mind doing so for the last movie or two movies.

Casting for young Severus Snape, Lily Evans, James Potter, Sirius Black, and Petunia Evans as well have yet to be announced; Alec Hopkins, Susie Shinner, and the other teenage kids in the flashback sequence in OOTP have yet to be comfirmed back as well.

As noted above, David Heyman has stated that special effects will be used to age the young actors for the "19 years later" epilogue, rather than casting older actors in the parts.

Emma Thompson will not return as Sybill Trelawney because she chose to work on Nanny McPhee and the Big Bang.

It was announced on August 9, 2009 that Jamie Waylett, who experienced legal difficulties earlier in the year, would not be returning for his role of Vincent Crabbe. Instead Gregory Goyle will cast the Fiendfyre spell and will die as a result.[132]

In January 4, 2009, SnitchSeeker reported that Julie Christie and Shirley Henderson will not reprise their roles as Madam Rosmerta and Moaning Myrtle.[133]

Both parts will be written by Steve Kloves, who wrote the first, second, third, fourth, and sixth films, and directed by David Yates, who directed the previous two films. David Heyman and David Barron are producing both parts.[134]

Academy Award-nominated cinematographer Eduardo Serra has been appointed to be the Director of Photography.[135]

Wedding designer Jenny Packham is designing outfits for the wedding of Bill Weasley and Fleur Delacour in the Harry Potter and the Deathly Hallows film. [137]

Differences From the Books

These are promotional images released by Warner Bros. 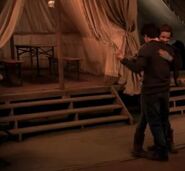 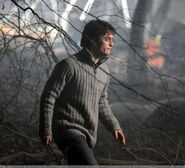 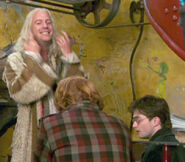 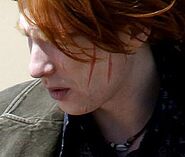 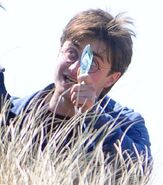 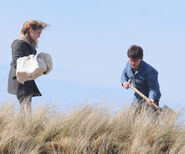 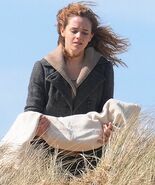 Retrieved from "https://harrypotter.fandom.com/wiki/Harry_Potter_and_the_Deathly_Hallows:_Part_2?oldid=320335"
*Disclosure: Some of the links above are affiliate links, meaning, at no additional cost to you, Fandom will earn a commission if you click through and make a purchase. Community content is available under CC-BY-SA unless otherwise noted.