Harry Potter and the Goblet of Fire (film)

This article is about the film. You may be looking for the novel, game, soundtrack, the video game soundtrack or the object of the same name.

Harry Potter and the Goblet of Fire

Harry Potter and the Prisoner of Azkaban

Harry Potter and the Order of the Phoenix

This film is also the first appearance for Ralph Fiennes as Lord Voldemort, a role which he would go on to reprise in all subsequent films in the series, except for Harry Potter and the Half-Blood Prince.

On the early morning hours of August 22, 1994, Frank Bryce is murdered by the hand of Lord Voldemort, who is apparently plotting to get to him with the aid of Wormtail and an unidentified young man. Harry Potter is woken up from a dream involving this by Hermione Granger.

Harry then travels by Portkey to the 422nd Quidditch World Cup with Amos and Cedric Diggory, whereby they witness the defeat of Bulgaria to Ireland. After the match, a gang of Death Eaters sparks terror among the campsite and Harry is separated from the others in the confusion and is knocked unconscious. After the destruction of the campsite, the unidentified young man from Harry's dream casts the Dark Mark into the sky, but flees when the others find Harry.

Harry, Ron, and Hermione arrive at Hogwarts, where they learn that the Triwizard Tournament will be taking place at the school that year. Delegations of students from Beauxbatons and Durmstrang arrive in the school to take part in the tournament: however, during the introductions, Alastor "Mad-Eye" Moody enters the Great Hall and is introduced as the new Defence Against the Dark Arts teacher for that year.

The Goblet of Fire, a magical object that selects the participants for the tournament, selects Fleur Delacour, Viktor Krum and Cedric Diggory. However, before the celebrations can begin, an unexpected fourth name is ejected from the goblet and is revealed to be Harry Potter, who professes his innocence to Albus Dumbledore as to how his name got there. His innocence is confirmed by Moody, but Harry is still required to compete in the tournament, as Barty Crouch Snr states that Harry is under a binding magical contract. The majority of students in the school believe Harry entered himself and the incident results in Ron no longer speaking with Harry.

Harry soon learns that the first task is to steal a Golden egg from a dragon, after Rubeus Hagrid shows him the dragons for the task in the Forbidden Forest. He informs Cedric of the upcoming task and, with thanks from Moody, is able to capture the egg using his Firebolt broomstick. Ron realises that Harry would never knowingly put himself into such danger without knowing about it beforehand, and the two make up and begin talking once more. During the winter holidays, Hogwarts plays host to a Yule Ball, but the evening ends on a bad note, as Ron jealously learns that Hermione had a date with Viktor Krum. Harry later has a similar dream to the one he had over the summer, but from the point of view of Frank and wakes when Frank is killed by the Killing Curse. Grateful for his tip-off about the dragons, Cedric tells Harry how to solve the clue with the egg and advises him to "take a bath".

Harry listens to the Golden Egg in the Prefect's Bathroom and correctly deduces that the second task involves a trip into the Black Lake to find something that has been taken from him. Having obtained Gillyweed from Neville Longbottom before the task, he uses it to swim under the lake for an hour and rescues Ron from the Merpeople. He also frees Gabrielle Delacour, as Fleur does not arrive due to her being attacked by Grindylows. His act of saving Gabrielle, despite her not being Harry's hostage, allows him to gain second place and ties his points with Cedric, while earning him two kisses from Fleur herself.

After the task, Harry meets with Barty Crouch Snr, who congratulates him for his achievements and stating that Harry's parents would be very proud of him. Crouch's talk is cut off by Moody, who begins to make accusations that Crouch is trying to recruit Harry. As Crouch walks towards Moody, he flicks his tongue which alarms Crouch, before he leaves. While wandering the forest with Hagrid and the others, he finds Crouch's corpse and heads to Dumbledore's Office in the castle, where Cornelius Fudge argues with Dumbledore and adamantly tells Dumbledore that he will "not be seen as a coward" for cancelling the Triwizard Tournament. Dumbledore, Fudge and Moody leave the office when Harry's presence is made known to them, Dumbledore letting Harry know that he can have a Licorice Snap, but warns that they are a "wee bit sharp".

In his haste, Harry picks some of the candy up, but they start jumping around and biting his hand. He stumbles and hits a hidden floor switch, revealing the Pensieve, toward which Harry steps toward carefully and cautiously. He suddenly falls into the depths of the Pensieve after staring into the mist and falls into a courtroom, where he learns that Igor Karkaroff used to be a Death Eater and that Crouch Snr used to have a son by the same name. Harry suddenly recalls that Crouch's son looked very much like the unknown man in his dream. When he informs Dumbledore of this recollection, Dumbledore urges him to put it out of his mind for now.

While making his way back to Gryffindor Tower, he catches sight of Karkaroff's Dark Mark while he argues with Severus Snape in a potions store cupboard. Snape maliciously taunts Harry about the supposed thefts of Boomslang skin from his store cupboard and suggests that he and his friends are brewing Polyjuice Potion, threatening to use Veritaserum on Harry if any more ingredients go missing from his stores.

The third task consists of a maze, and the champions only need to find the Triwizard Cup in the centre, which has been placed there by Alastor Moody. The maze is later seen to be enchanted and blows gusts of wind every so often to disorient the champions. During the maze challenge, Krum stuns Fleur and attempts to do the same to Cedric, but is stunned when the latter uses the Disarming Charm against him. Harry stops Cedric from attacking Krum further and runs off, before noticing the cup. They run towards it, but Cedric is caught by roots and nearly engulfed by them, but Harry saves him. The two grab the cup themselves but are teleported to the graveyard of Little Hangleton. where Harry recalls his dreams of being in that place, but before he can explain further, Wormtail and Lord Voldemort arrive, causing Harry to clutch his scar in pain. Seeing the danger, Harry desperately tells Cedric to go back to the cup, but a cauldron standing between them activates, making Harry suffer pain in his scar even more. Cedric is killed by Wormtail and Harry is pinned to a statue of the angel of death.

Wormtail drops Voldemort into the potion, puts a bone of his father into it, cuts off his hand, and draws blood from Harry. The additions revive Voldemort. When Voldemort is fully revived, he summons the Death Eaters to the graveyard and fits Wormtail with a new hand. Voldemort admonishes them for leaving him and then spots Harry and explains to the Death Eaters about how Harry survived while he (Voldemort) was rendered powerless and disembodied, then touches Harry's scar, causing pain to Harry. Voldemort then frees Harry and forces him to a duel. As they duel, their spell cause the effect of Priori Incantatem. The spirits of people killed by Voldemort's wand, Harry's parents, Cedric and Frank Bryce, exit out of Voldemort's wand and watch the two fight. Harry's father tells him that as soon as the connection is broken, they shall create a diversion to hold Voldemort and the Death Eaters for a few seconds so Harry can get back to the cup. Cedric asks him to bring his body back. Harry does not break contact until his mother orders him to do so. The spirits create the said diversion, giving Harry enough time to get to Cedric's body and summon the Triwizard Cup with the Accio spell and then teleport to Hogwarts. Voldemort roars with fury when his plan fails.

Upon Harry's arrival at Hogwarts, the entire community and the the two other schools express horror when they see Cedric's corpse and hear Harry's testimony that Voldemort has returned. Moody secretly takes Harry away from the maze and into his office, where he reveals himself to be behind all the events of the year; it was he who put Harry's name in the Goblet, suggested that Hagrid take Harry into the woods to see the dragons, informed Cedric how to discover the clue in the Golden egg, gave Neville Longbottom the book about Gillyweed, bewitched Viktor in the maze, and made the Triwizard Cup a Portkey.

Dumbledore, realising that the real Moody would not get Harry away from him, forcibly breaks into his office with Snape and McGonagall, and disarms him. After Snape forces Veritaserum upon Moody, the latter indicates a magical trunk where the professors and Harry discover the real Moody. The Polyjuice Potion wears off and the impostor is revealed to be Bartemius Crouch Jnr, who impersonated Moody to access Hogwarts, arranged events to ensure Harry made it to the third task, and also stole from Snape's stores. The professors and Harry leave the room and Snape stays to guard Bartemius, his wand pointed at the latter's face; Bartemius makes a final snake-like flick of his tongue, his trademark move.

A Memorial Feast is held at the Great Hall, in memory of Cedric, where Dumbledore announces, against the Minister's will, that Voldemort is back once more. Afterwards Harry, Ron and Hermione reflect on events knowing that Hogwarts will never be the same.

Differences from the book

4. Back to the Burrow

10. Mayhem at the Ministry

11. Aboard the Hogwarts Express

18. The Weighing of the Wands

28. The Madness of Mr Crouch

36. The Parting of the Ways

The film grossed $290 million in the USA-Canada market out of $896 million worldwide.This ranked it second behind the Stone film among the first four Harry Potter films released,and it was for a while among the top 10 worldwide all-time, but it is now 11th (the films passing it worldwide including Harry Potter and the Order of the Phoenix).

Dark and Difficult Times Lie Ahead

Everything Is About to Change 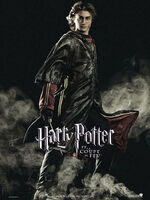 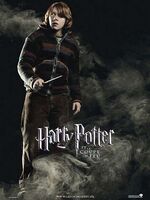 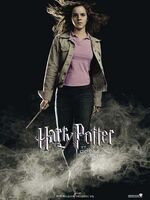 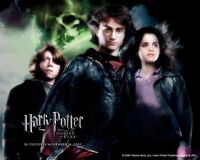 Ron, Harry And Hermione close up. 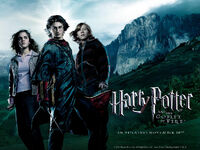 Hermione, Harry, and Ron close up 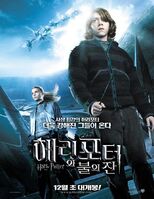 Ron and Fleur close up 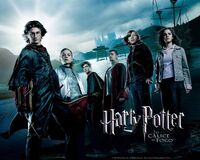 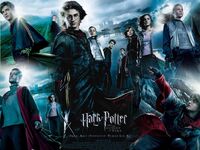 Dark and Difficult Times lie Ahead

Close up of Ron,Hermione and Harry.

Harry,Ron and Hermione and the rest of the competitors

Harry,Ron and Hermione close up.

Deutsch Español Français Italiano 日本語 Polski Русский
*Disclosure: Some of the links above are affiliate links, meaning, at no additional cost to you, Fandom will earn a commission if you click through and make a purchase. Community content is available under CC-BY-SA unless otherwise noted.
Advertisement