This necklace, which consists of red gems, pearls and a gold chain, was worn by Hermione Granger to the wedding of Bill Weasley and Fleur Delacour in 1997. She wore it until she was forced to change her clothes after she ran away from the wedding with Harry Potter and Ron Weasley when Death Eaters arrived. This necklace was then destroyed by Scabior at Malfoy Manor when Hermione, Harry and Ron were captured.

Hermione Granger, Harry Potter and Ron Weasley after they fled from the wedding by disapparating to London. 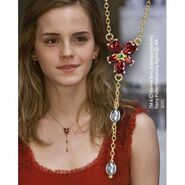 A replica of Hermione Granger's necklace.
Add a photo to this gallery

Retrieved from "https://harrypotter.fandom.com/wiki/Hermione_Granger%27s_necklace?oldid=743836"
*Disclosure: Some of the links above are affiliate links, meaning, at no additional cost to you, Fandom will earn a commission if you click through and make a purchase. Community content is available under CC-BY-SA unless otherwise noted.