"A vicious, nocturnal beast adept at both disguise and disembowelling. The result of accidental breeding between a Demiguise and a ghoul."
—Description[src]

The Hidebehind was a nocturnal, forest-dwelling spectre-like beast that preyed on humanoid creatures. It could shift its shape, allowing it to hide behind almost any object.[1] It was an accidentally created hybrid species.[2]

Although it had the power of Invisibility, those who had seen it described it as tall with silver-hair, akin to a skinny bear. It could also contort itself to lurk behind any object.

Its prey of choice was humans, which Magizoologists speculated was the result of the cruelty shown by Phineas Fletcher to the creatures in his power.[3] Only a witch or wizard would have been likely to survive an attack by these creatures.

The Hidebehind was accidentally created when illegal trader Phineas Fletcher attempted to import a trafficked Demiguise into America, with the goal of manufacturing Invisibility cloaks. The Demiguise escaped while on board the ship and bred with a stowaway ghoul, and the offspring escaped into the forests of Massachusetts.[3]

In the early 1620s, a Hidebehind of unusual size and strength was chased away by Isolt Sayre after it had managed to capture a young Pukwudgie. The same Hidebehind was later responsible for the deaths of the parents of Chadwick and Webster Boot, but was later defeated by Isolt Sayre and William the Pukwudgie.[1] 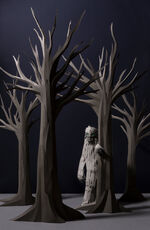 The Harry Potter Wiki has 2 images related to Hidebehind.

Retrieved from "https://harrypotter.fandom.com/wiki/Hidebehind?oldid=1334368"
*Disclosure: Some of the links above are affiliate links, meaning, at no additional cost to you, Fandom will earn a commission if you click through and make a purchase. Community content is available under CC-BY-SA unless otherwise noted.