"Half horse, half eagle creatures, immensely proud and extremely dangerous."
— Description of a Hippogriff[src]

A Hippogriff was a magical beast that had the front legs, wings, and head of a giant eagle and the body, hind legs and tail of a horse. It was very similar to another magical creature, the Griffin, with the horse rear replacing the lion rear.[3]

A hippogriff was one rare possible corporeal form of the Patronus Charm.[5]

Hippogriffs had the bodies, hind legs, and tails of horses, but the front legs, wings, and heads of giant eagles, with cruel, steel-coloured beaks and large, brilliantly orange eyes. The talons on their front legs were half a foot long and deadly-looking.[2]

It was stated that, once you get over the initial shock of seeing something that's half horse, half bird, you start to appreciate the hippogriffs' gleaming coats, which changed smoothly from feathers to hair. Hippogriffs came in several different colours, including: stormy grey, bronze, pinkish roan, gleaming chestnut, and inky black.[2]

Hippogriffs were carnivorous and were extremely dangerous until tamed, which should only be attempted by a trained witch or wizard. The diet of the Hippogriff consisted mainly of insects, birds, and small mammals such as ferrets. They would sometimes paw at the ground for worms if no other food was readily available.[6]

When breeding, Hippogriffs built nests on the ground, and laid only a single, fragile egg. The egg usually hatched in twenty-four hours. Infant Hippogriffs were capable of Flight within a week, but it took many months before they were strong enough to accompany their parents on long journeys.[3]

"Now, firs' thing yeh gotta know abou' hippogriffs is, they're proud. Easily offended, hippogriffs are. Don't never insult one, 'cause it might be the last thing yeh do. Yeh always wait fer the hippogriff ter make the firs' move. It's polite, see? Yeh walk towards him, and yeh bow, an' yeh wait. If he bows back, yeh're allowed to touch him. If he doesn' bow, then get away from him sharpish, 'cause those talons hurt."
— Rubeus Hagrid teaches his first class about hippogriffs[src]

When Humans approach Hippogriffs, a proper etiquette must be maintained to avoid danger. Hippogriffs were intensely proud creatures, and an individual must show proper respect by bowing to them, and waiting for them to bow in return before approaching. Eye contact should be maintained at all times, without a single blink.[2]

The Hippogriff should be allowed to make the first move, as that was polite. If offended, it might attack. Hippogriffs were tamable, but only by experts in their care (such as Rubeus Hagrid, Care of Magical Creatures Professor and Gamekeeper at Hogwarts).[2]

Although proud, Hippogriffs could also be fiercely loyal and protective of those who had earned their trust, as demonstrated by Buckbeak on at least two occasions: when he attacked Severus Snape in defence of Harry Potter during the Battle of the Astronomy Tower, and again when he led Hogwarts' Thestrals in attacking Voldemort's giants during the Battle of Hogwarts.[7]

Hippogriffs in the wizarding world

Owners of Hippogriffs were required by law to cast a Disillusionment Charm on the creature every day to prevent it from being seen by Muggles. Using Hippogriffs for personal transportation was also illegal under the International Statute of Wizarding Secrecy.[8]

"Easily offended, hippogriffs are. Don't never insult one, 'cause it might be the last thing yeh do."
— Rubeus Hagrid talking to the class about Hippogriffs[src]

A herd of Hippogriffs were kept at Hogwarts School of Witchcraft and Wizardry, and Rubeus Hagrid used them in his first Care of Magical Creatures class in 1993.

Buckbeak was a hippogriff that was a part of the Hogwarts' herd and had many encounters with the trio during the course of their education. He lived with Rubeus Hagrid and many other Hippogriffs, but was later sentenced to death, due to being taunted and provoked by Draco Malfoy and attacking him.[2] Buckbeak was sentenced for this act by the Committee for the Disposal of Dangerous Creatures, most of whom had been threatened by Lucius Malfoy, Draco's father, into voting for that verdict.[9]

With the help of Harry Potter, Hermione Granger, and her Time-Turner, Buckbeak escaped execution in 1994 and he came under the care of Sirius Black.[6] Sirius kept Buckbeak with him while on the run during the 1994–1995 school year, and later kept him in hismother's bedroom while in hiding at 12 Grimmauld Place.[4]

After Sirius's death, Buckbeak came to be owned by Harry Potter through Sirius's will, though Harry allowed him to live with Hagrid. He participated in two battles of the Second Wizarding War, most notably the Battle of Hogwarts.[10] He also showed great affection and loyalty to Harry, defending him whenever he was in danger.[11][12]

During the Yule Ball at Hogwarts in 1994, Hippogriffs were mentioned in the Weird Sisters song, Do The Hippogriff. The song encouraged listeners to do a dance that drew its inspiration from this creature, "flyin' off from a cliff" and "swooping down to the ground..."[13]

A Hippogriff was discovered by Mathilda Grimblehawk and her partner to have attacked Gordon Horton, Quidditch keeper for the Chudley Cannons, while defending its nest and young in the Old Bell Tower. It was subsequently relocated.[14]

A Hippogriff was part of the Circus Arcanus.[15]

In the 21st century, adult and baby hippogriffs were caught in Confoundables caused by the Calamity and had to be rescued by volunteer members of the Statute of Secrecy Task Force.[16] One such Hippogriff was seen in Japan.[17] 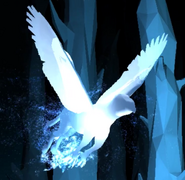 A Patronus Charm cast in the form of a hippogriff 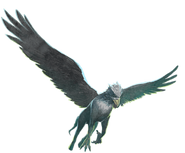 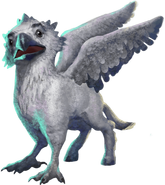 Derived from the Greek word "hippos" meaning "horse", and the magical creature known as the griffin. In this case, it has the body of a horse as opposed to a lion, but keeps the head of an eagle.

The Harry Potter Wiki has 31 images related to Hippogriff.

Deutsch Ελληνικά Español Suomi Français Nederlands Norsk Polski Português do Brasil Русский
*Disclosure: Some of the links above are affiliate links, meaning, at no additional cost to you, Fandom will earn a commission if you click through and make a purchase. Community content is available under CC-BY-SA unless otherwise noted.
Advertisement