"He had one brief glimpse of an enormous, high-ceilinged room, large as the Great Hall above it, with mounds of glittering brass pots and pans heaped around the stone walls, and a great brick fireplace at the other end..."
— Description[src]

The Hogwarts kitchens was a room located in Hogwarts School of Witchcraft and Wizardry. It was where all the food for Hogwarts students and staff was prepared. House-elves inhabited this room and were responsible for preparing meals.[1]

The kitchen was located directly under the Great Hall, down the staircase leading to the Hufflepuff Basement.[1]

The school kitchens were accessible by going through a door in the entrance hall and taking the stairs downwards. Downstairs, in a broad stone basement corridor, brightly lit and decorated with food-themed paintings, one could tickle a pear on a painting of a bowl of fruit.

The pear would then giggle and turned into a large green door handle, revealing the entrance to the Hogwarts kitchens.[1]

"Each of these tables, Harry noticed as he passed them, was positioned exactly beneath the four House tables above, in the Great Hall. At the moment, they were clear of food, dinner having finished, but he supposed that an hour ago they had been laden with dishes that were then sent up through the ceiling to their counterparts above."
— The layout and function of the kitchens in relation to the House tables[src]

During the Triwizard Tournament there were a few changes made to the kitchen system. The addition of the Beauxbatons and Durmstrang students demanded a greater variety of dishes to better suit foreign tastes.[1] In addition, during the Yule Ball, dining was accomplished through guests selecting their meal choices through menus.[2]

Helga Hufflepuff brought the house-elves in to work so that they could avoid being abused;[3] she also created many of the recipes used to this day at Hogwarts.[4]

In 1971 to 1978, James Potter used his Cloak of Invisibility to sneak into the kitchens to steal food.[5]

Mary Karasu: "These four chefs have achieved prefect harmony, fusing tradition with innovation and creativity!"
Rosa Karasu: "The end result is really quite extraordinary. And it's made all the better shared with treasured family and friends!"
— Mary and Rosa Karasu regarding the Great Hogwarts Cook-Off[src]

In the 1988–1989 school year, Jacob's sibling and Jae Kim served detention in the kitchens.[6] Later during the same school year, the Great Hogwarts Cook-Off was held in the kitchens, with participating students preparing a variety of different dishes there.[7]

Madams Mary and Rosa Karasu visited Hogwarts School of Witchcraft and Wizardry to suggest such an event. The Madams Karasu were the judges, and their granddaughter, Tulip, recruited Jacob's sibling to co-organise it. They invited four contestants, Badeea Ali, Diego Caplan, Ismelda Murk, and Jae Kim to compete (who would be cooking fish stew, flan, meat pie with blood sausages and tteokbokki respectively), and Murphy McNully to host and commentate.

The cook-off started out smoothly, with four contestants finishing their dishes in time for the judges to review. Then, the Madams Karasu offered each of the dishes some constructive criticism, but inadvertently angered Ismelda when Mary called her dough "sad and soggy". She turned her meat pie into a monster. It destroyed Diego Caplan's dancing flan before being eradicated by Jacob's sibling using the Eradication Spell.[7]

"At least a hundred little elves were standing around the kitchen, beaming, bowing, and curtsying as Dobby led Harry past them. They were all wearing the same uniform: a tea towel stamped with the Hogwarts crest, and tied, as Winky's had been, like a toga."
— Harry Potter viewing the Hogwarts house-elves while in the kitchens[src]

During the 1990–1991 school year, when an infestation of doxies was plaguing the castle, the Doxy Queen covered the kitchen with her eggs, which the house-elf Pitts got stuck in. Jacob's sibling, Chiara Lobosca and Victor Ketsueki proceeded to destroy the doxy eggs and eliminated many doxies in the kitchen, freeing Pitts, but the Doxy Queen escaped to the Prefects' Bathroom, where she was promptly killed by the students.[8] Also during this school year, Fred and George Weasley hid Victor Ketsueki's coffin in the kitchens as a prank, where they placed a glitter bomb inside. When Victor found his coffin in the kitchens and was covered in glitter, he did not hate his sparkly new appearance as he thought, as he thought it made him look cool.[9]

In 1992, after Gryffindor defeated Hufflepuff in Quidditch match, Fred and George Weasley brought tons of snacks from the kitchens to the Gryffindor Common Room.[10]

In 1993, Headmaster Albus Dumbledore decided, upon the rescue of Ginny Weasley from the Chamber of Secrets, that the students of Hogwarts needed a feast. Hence, he sent Minerva McGonagall to the kitchens to persuade the house-elves to hold such a banquet.[11]

In 1994, before the welcoming feast in the entrance hall, Peeves had caused havoc and mayhem in the kitchens, terrorising the house-elves.[12] After Harry Potter impressive performance in the first task of the Triwizard Tournament, Fred and George Weasley brought tons of snacks from the kitchens to the Gryffindor Common Room, in order to hold a surprise party for Harry. The rest of the House were amazed at this accomplishment. However, as long as the students were kind and polite to them, the house-elves of the kitchens were more than glad to give away the food to them.

After asking the twins how to access the kitchens, Hermione Granger discovered the kitchens, and although initially she attempted to convince the house-elves employed there to accept pay and holidays, upon seeing Dobby, she instead brought her friends Harry Potter and Ronald Weasley to visit Dobby.[1]

In 1996, Harry ordered Kreacher to work in the kitchens, after he inherited him from Sirius Black.[13] In the final part of the Battle of Hogwarts against Voldemort and his Death Eaters, Kreacher led the house-elves into battle from the kitchens.[14]

The kitchen was a gigantic, high-ceilinged room with five tables identical to the ones in the Great Hall above; they were also in the exact same position. There were large quantities of pots and pans heaped around the stone walls, presumably on counter-tops or stoves, and a large brick fireplace at the other end of the hall from the door.[1]

Over a hundred house-elves worked in the Hogwarts's kitchens. 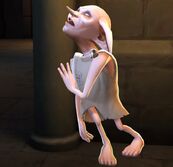 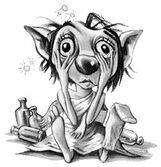 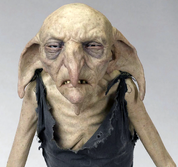 The Harry Potter Wiki has 24 images related to Hogwarts kitchens.

Deutsch Español Français Polski Português do Brasil Русский
*Disclosure: Some of the links above are affiliate links, meaning, at no additional cost to you, Fandom will earn a commission if you click through and make a purchase. Community content is available under CC-BY-SA unless otherwise noted.
Advertisement