Madam Malkin's Robes for All Occasions[1]

The Hogwarts uniform was the clothing that students attending Hogwarts School of Witchcraft and Wizardry were required to wear.[1]

The uniform must be worn every day in every lesson, and kept on while in the Great Hall, Study Hall, Common Room or Library.[1] Students might wear casual clothing when they had the day, or the rest of the day, free.

The uniform was washed in the laundry, which was located somewhere in Hogwarts Castle and presumably operated by the house-elves enlisted by the school.[2]

The required uniform consisted of a plain work robes, which during the early 1900s was blue,[3] and in the later years was black, and a black pointed hat for the day.[1] Hogwarts required every pupil to buy at least three robes.[1]

Certain Herbology classes required a pair of protective gloves, such as those made from dragon hide or similar materials.[1]

For the cold winter months, students had a winter cloak with silver fastenings. Every piece of clothing was to carry name tags.[1]

Any pupil who held a position for which a badge was given, such as those for Prefects, displayed them on their uniform.[4][5]

The constituents of the Hogwarts uniform could be purchased in Diagon Alley, at Madam Malkin's Robes for All Occasions and other needed clothing articles,[1] but alternative options existed, such as Twilfitt and Tattings[6] or the Second-Hand Robes shop.[7]

In the late 1800s, students wore button down vests in the colours of each house, with scarlet for Gryffindor, green for Slytherin, blue for Ravenclaw, and black and yellow for Hufflepuff with an emblem of the house mascot on one side.

In the late 1930s and early 1940s, the film replaced a robe with a grey blazer with the emblem of the house the pupil is in. They had a plain white shirt and a house themed tie, with a grey knitted v-neck jumper. The boys could wear grey trousers or breeches while the girls wore a gymslip with a pleated skirt. Tom Riddle and his gang can be seen wearing blazers in the sixth film.

In the second film, students wore a cloak as the outer of the blazer. It is indicated that cloak has already developed as one of the school official uniforms though it hasn't become the must-wear ones. Tom Riddle and Myrtle Warren were seen wearing this uniform.

By the early 1990s, the uniform had changed quite a bit. Pupils no longer wore blazers. They were replaced by plain robes with a large emblem. They had to wear a plain white buttoned shirt with a house themed tie in thick stripes.

They could also wear a grey knitted v-neck jumper with the house colours on the neckline, plain black shoes, grey socks, and an open black buttoned robe with the student's house emblem on. They often wore a scarf which had thick blocks.

In the third film, the uniform would undergo a re-design. Although the colours remained the same, they were in another shade. The emblem is smaller on the robes, and the main house colour is seen on the collar (i.e. red for Gryffindor, green for Slytherin etc.).

The themed ties and scarves have thinner blocks. The jumpers had house themed lining. Many pupils could wear accessories. Draco Malfoy wore a snake badge on his tie and Luna Lovegood, wore various accessories, ranging from a butterbeer cork necklace to dirigible plum earrings.

By the time of the stage play of Harry Potter and the Cursed Child, the uniform has changed slightly. Perhaps the most important change is the robes, which have been completely redesigned. 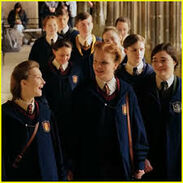 Hufflepuff Uniform in 1910's. Three black stripes on both sleeves bottom of the Robe.

Slytherin uniform in the 1940's

Sorting robes with no crest of the four Houses but a black tie with the Hogwarts Crest. 1991 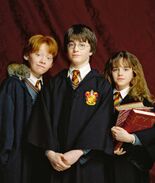 Hermione in Gryffindor uniform in 1995

Deutsch Italiano Polski Português do Brasil
*Disclosure: Some of the links above are affiliate links, meaning, at no additional cost to you, Fandom will earn a commission if you click through and make a purchase. Community content is available under CC-BY-SA unless otherwise noted.
Advertisement