Hungary is a landlocked country in Central Europe. It is situated in the Carpathian Basin and was bordered by Slovakia to the north, Ukraine and Romania to the east, Serbia and Croatia to the south, Slovenia to the southwest and Austria to the west.[4]

An issue of Transfiguration Today published in 1926 featured an article that examined the implications that the ancient myths of the Transdanubia region of Hungary held for the modern practise of transfiguration.[5]

A delegate from Hungary was member of the International Confederation of Wizards and participated in the meeting held at the Magical Congress of the United States of America on 6 December 1926.[6]

Mountain trolls were reported to be riding graphorns through Hungary in 2020.[8]

It is possible that some Hungarian wizards and witches have the option to attend Durmstrang Institute as it accepted students all over Northern and Eastern Europe, as long as they were of wizarding heritage.[9] 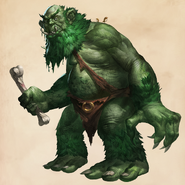 Troll
Add a photo to this gallery

Retrieved from "https://harrypotter.fandom.com/wiki/Hungary?oldid=1432710"
*Disclosure: Some of the links above are affiliate links, meaning, at no additional cost to you, Fandom will earn a commission if you click through and make a purchase. Community content is available under CC-BY-SA unless otherwise noted.