Ilvermorny staff and students including pukwudgies

Ilvermorny School of Witchcraft and Wizardry

Ilvermorny Castle was the castle that housed Ilvermorny School of Witchcraft and Wizardry. It stood at the highest peak of Mount Greylock, where it was concealed from non-magic gaze by a variety of powerful enchantments, which sometimes manifested in a wreath of misty cloud.[1]

The castle was once a granite stone house constructed by Isolt Sayre and James Steward to be their home, named after Isolt's childhood home in Ireland. When it eventually became a school, the house kept expanding until it became a castle.[1]

The granite castle had marble statues of the founders Isolt Sayre and James Steward that flanked the front doors of the castle. Inside, there was an Entrance hall, a circular room, with four large wooden statues of the four houses: Thunderbird, Horned Serpent, Wampus, and Pukwudgie. There was a wooden circular balcony where the older students watched in silence as the new students were sorted, and was topped by a glass cupola. The Entrance hall was made of stone and had a Gordian Knot in middle of the floor. There was also a large hall where students selected or were selected by a wand.

There were also dormitories and a central tower with the Ilvermorny crest in the centre, and a stained-glass window with an image of a Snakewood tree on it. In the grounds, there was an actual Snakewood tree, which grew from Isolt's buried wand. Isolt Sayre's tomb was also in the grounds, with mayflowers placed at the tomb every year on the anniversary of her death. The Entrance Gates had the Gordian Knot on them. 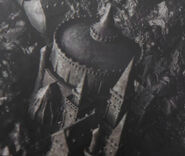 Snakewood tree on the grounds

Ilvermorny central tower
Add a photo to this gallery

Retrieved from "https://harrypotter.fandom.com/wiki/Ilvermorny_Castle?oldid=1342712"
*Disclosure: Some of the links above are affiliate links, meaning, at no additional cost to you, Fandom will earn a commission if you click through and make a purchase. Community content is available under CC-BY-SA unless otherwise noted.