Infiltration of the British Ministry of Magic

"Blooming pain in the bum, this, eh? Forcing us all to get to work this way! Who are they expecting to turn up, Harry Potter?"
— Ministry employee[src]

The infiltration of the Ministry of Magic on 2 September, 1997 took place during the height of the Second Wizarding War. The Ministry had recently fallen to Lord Voldemort and his Death Eaters.

Harry Potter, Hermione Granger, and Ron Weasley snuck inside the Ministry in order to steal one of Voldemort's Horcruxes, Salazar Slytherin's Locket.[1] In the process, the Trio also freed multiple Muggle-borns who were awaiting trial, as well as reclaiming Alastor Moody's magical eye from Dolores Umbridge that was placed on a peephole in her office door so she could spy on her colleagues.[2]

Mundungus Fletcher: "...was selling in Diagon Alley and she come up to me and asks if I’ve got a licence for trading in magical artefacts. Bleedin’ snoop. She was gonna fine me, but she took a fancy to the locket an’ told me she’d take it and let me off that time, and to fink meself lucky."
Harry Potter: "Who was this woman?"
Mundungus Fletcher: "I dunno, some Ministry hag. Little woman. Bow on top of ‘er head."
— The trio question Mundungus about the locket[src]

Salazar Slytherin's Locket was an heirloom of Lord Voldemort’s maternal family and one of his Horcruxes. This was discovered at some point during the First Wizarding War by Regulus Black, a Death Eater who grew disillusioned in his allegiances and turned against the Dark Lord. Regulus, with the assistance of his loyal house-elf, Kreacher, tracked the locket to its hiding place in a cave in 1979. He replaced the locket with a fake one, leaving a note to Voldemort admitting what he did, and was killed by the Inferi in the cave’s lake.[4]

Voldemort never learned of this, but Harry Potter, Hermione Granger, and Ron Weasley deduced it in 1997. They questioned Kreacher as to what had happened to the locket, and he eventually told them what had transpired with Regulus and that Mundungus Fletcher had stolen the locket from 12 Grimmauld Place. Harry sent Kreacher to find Fletcher and bring him back to the Black household, where he and his friends were hiding out.[4]

Fletcher admitted to taking the locket and told them that he was forced to give it up to a Ministry of Magic employee — Dolores Umbridge. The Ministry had fallen under Voldemort’s control in August, and Umbridge was the head of the new Muggle-Born Registration Commission, an instrument of discrimination against Muggle-borns.[5] Harry, Ron, and Hermione spent the next few weeks making a plan to sneak into the Ministry, the most “dangerous place in the whole world” for them to be at the moment.[1]

The trio waited outside the Ministry under Harry’s Invisibility Cloak. Hermione nonverbally stunned Ministry employee Mafalda Hopkirk and then took Polyjuice Potion to take her form. The trio moved her unconscious form into an empty theatre nearby. Next, Reginald Cattermole arrived and Hermione gave him a "sweet" that immediately made him sick and insisted that he go to St Mungo's, despite his reluctance. She discreetly acquired hairs from him in the process, and they were used to have Ron take on his form. Hermione and Ron then obtained hairs from Albert Runcorn to disguise Harry.[1]

Once inside, Harry, Ron, and Hermione split up to take the employee entrances concealed in a set of underground public toilets. Employees had to "flush" themselves in, though they did not get wet. They then found themselves in the Ministry Atrium, where the Fountain of Magical Brethren had been replaced by a black stone statue of a wizard and witch seated on ornate thrones made from the bodies of naked Muggles hundreds and hundreds of, men, women, and children, all with stupid, ugly faces “in their rightful place”. The base of the statue read "Magic is Might".[1]

"If my wife were accused of being a Mudblood — not that any woman I married would ever be mistaken for such filth — and the Head of Department of Magical Law Enforcement needed a job doing, I would make it my priority to do this job, Cattermole. Do you understand me?"
— Yaxley threatens Reg Cattermole (actually Ron Weasley)[src]

They headed for the lifts, but were intercepted by Death Eater and head of the Department of Magical Law Enforcement Corban Yaxley, who demanded that “Cattermole” fix his office, where it was raining. Hermione whispered advice on how Ron could fix the problem before the trio was forced to split up.[1] She was then pulled away from Harry as Umbridge arrived, believing that Travers sent "Mafalda" to record-keep for her. Harry was left alone with the puppet Minister for Magic Pius Thicknesse, and then went in search of Umbridge’s office after putting on his Cloak of Invisibility, to avoid having to interact with ministry employees.[2]

As Harry searched for Umbridge’s office in hopes of finding Salazar Slytherin's Locket, he came across Ministry workers creating political propaganda in the form of pamphlets entitled Mudbloods and the Dangers They Pose to a Peaceful Pure-Blood Society It was implied to have been written by Umbridge. Harry then found her office — with the magical eye of the late Alastor Moody on the door. Harry took the magical eye and searched the room, but could not find the locket. He did, however, find a file on Arthur Weasley that declared him to have "unacceptable pro-Muggle leanings" and to be under surveillance as a known member of the Order of the Phoenix and acquaintance of “Undesirable No. 1”, none other than Harry himself.[2]

Harry and Ron briefly met up again in the lift, where they ran into Arthur. He advised “Reg” on how to fix the rain in Yaxley’s office and then confronted “Runcorn” on turning Dirk Cresswell in as a Muggle-born who faked his family tree, forcing him to go on the run. Harry attempted to warn him about the Ministry watching him.[2]

After Arthur got off the lift, Harry wandered about under his Invisibility Cloak trying to find Hermione, and his attention was caught when he noticed the presence of Dementors.[2]

Harry found a courtroom in which a wizard named Alderton was being tried as a Muggle-born. When he tried to protest that he was a half-blood, he was threatened with the Dementor's Kiss and then sentenced to Azkaban. Mary Cattermole was called next, and Harry entered the room to find that Dolores Umbridge was conducting trials with the assistance of Corban Yaxley and Hermione disguised as Mafalda Hopkirk.[2]

"There was a flash of red light; Umbridge crumpled and her forehead hit the edge of the balustrade: Mrs Cattermole’s papers slid off her lap on to the floor and, down below, the prowling silver cat vanished. Ice-cold air hit them like an oncoming wind: Yaxley, confused, looked around for the source of the trouble and saw Harry’s disembodied hand and wand pointing at him. He tried to draw his own wand, but too late. ‘Stupefy!’. Yaxley slid to the ground to lie curled on the floor."
— Harry stunning Umbridge at Yaxley at Mary Cattermole's trial[src]

While Umbridge sadistically conducted the trial, she exposed the locket she was wearing around her neck. Hermione asked her about it, and Umbridge told her it was a Selwyn family heirloom, a claim to bolster her “pure-blood credentials”. Harry, enraged, stunned her and Yaxley with the Stunning Spell from beneath the Cloak of Invisibility.[2]

Umbridge’s Patronus vanished and the Dementor in the courtroom attacked Mrs Cattermole. Harry used a Patronus Charm, while Hermione took the locket from Umbridge and left a copy in its place so that Umbridge would not later suspect the truth. She then freed Mrs Cattermole from her restraints with a Revulsion Jinx. Harry and Hermione summoned their Patronuses and freed the other Muggle-born prisoners, telling them to flee the country while Voldemort remained in power.[2]

Harry and Hermione met back up with Ron as they and the freed prisoners raced to the Atrium. By then, the Ministry's security had been alerted because Moody's magical eye was missing from Umbridge's office, and there were workers sealing off the exits. Harry used his disguise as the intimidating Albert Runcorn to bully them into stopping momentarily. The Muggle-borns fled as the real Reginald Cattermole arrived and Corban Yaxley appeared, ordering that the exits be sealed again.[2]

Yaxley soon figured out what was happening and tried to stop them from escaping. He grabbed Hermione’s arm as she, Harry, and Ron Disapparated.[2] She used a Revulsion Jinx to force him to release her, but he was taken past the protections around 12 Grimmauld Place, forcing them to abandon it as a safe house as well as causing them to go on the run, aided only by a magical tent. Their hasty Apparition from Grimmauld Place also caused Ron to Splinch himself, suffering a painful wound to his side and arm that required immediate treatment with essence of Dittany.[6]

Harry Potter, Ron Weasley, and Hermione Granger obtained a Horcrux, retrieved Alastor Moody’s magical eye from the Ministry of Magic, and freed many innocent people who would have been prosecuted by the Muggle-Born Registration Commission.[2] However, 12 Grimmauld Place was exposed to the Death Eaters, forcing the trio to move around in the wild for the next few months.[6] Carrying Salazar Slytherin's Locket with them also exposed them to negative energy that would eventually lead to Ron temporarily abandoning his friends.[7] 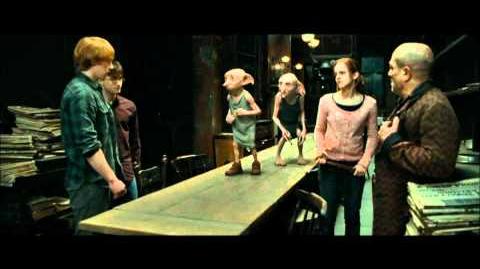 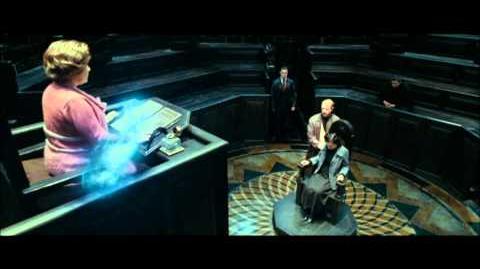 Retrieved from "https://harrypotter.fandom.com/wiki/Infiltration_of_the_British_Ministry_of_Magic_(1997)?oldid=1430399"
*Disclosure: Some of the links above are affiliate links, meaning, at no additional cost to you, Fandom will earn a commission if you click through and make a purchase. Community content is available under CC-BY-SA unless otherwise noted.