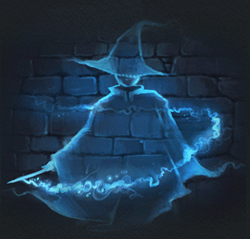 "I don't need a cloak to become invisible."
— Albus Dumbledore to Harry Potter[src]

Invisibility was the power of being invisible, the state in which a physical object remains magically unseen by others.[1][2]

"Harry looked down at his feet, but they were gone. He dashed to the mirror. Sure enough, his reflection looked back at him, just his head suspended in midair, his body completely invisible. He pulled the cloak over his head and his reflection vanished completely."
— Harry Potter having become invisible for the first time with his Invisibility Cloak[src]

A highly useful skill, Invisibility could be harnessed by Wizardkind, most notably by using an Invisibility cloak,[1] Invisibility Potion[3] or Invisibility Spell.[4] A Disillusionment Charm[5] or Bedazzling Hex[6] could also be cast to achieve virtual invisibility. The Protective enchantment Cave inimicum would produce an invisible boundary over the caster, concealing them from view.[7][8]

Wizards had also developed the Invisibility Charm, a spell used to render a target area invisible.[9] They also developed the Invisibility Booster, a device which could turn an enchanted car, its passengers, and everything else inside invisible.[10] Invisible Ink was a type of magical ink that transfigured writing to become invisible.[11][12] Disappearing Ink would presumably write invisible text onto paper.[13] Headless Hats were prank devices invented by Fred and George Weasley to make the wearer's head become invisible, in order to startle people.[4]

There was also a section of books in the Hogwarts Library called the Invisibility Section. The books within this section discussed invisibility and were, appropriately, invisible.[14] Some books, such as The Invisible Book of Invisibility, were invisible, raising the question how they were even read, as Flourish and Blotts could never so much as find two-hundred copies of these books.[15]

Several magical creatures possessed various degrees of invisibility. Most notable include the Demiguise, an orangutan-like ape, who could turn invisible at will,[16][17] and the Thestral, who appeared invisible to anybody that hasn't witnessed and accepted the reality of death.[18][19] Poltergeists such as Peeves may have chosen to be invisible or not,[20][21] an ability they may share with other non-beings. The Tebo and Hidebehind were also magical beasts who all had the ability to become invisible.[16] The Wrackspurt was an invisible creature which could float into a person's ears, and make their brain go fuzzy,[22] but could be seen with Spectrespecs.[23]

Certain creatures and items could become invisible to certain people while remaining fully visible to others at the same time; while compared to true Invisibility, this ability seemed more akin to manipulation of the targets' minds. The most well-known example of this debatable form of Invisibility were Thestrals, a type of skeletal winged horse known for being "invisible" to those who had not witnessed and comprehended death.[18][19] Another example was bimetal alchemical thread, a patented wizard-made magical fibre, invisible to practitioners of the Dark Arts.[24] Dementors were invisible to muggles and Squibs, but visible to wizardkind.[25][26]

Retrieved from "https://harrypotter.fandom.com/wiki/Invisibility?oldid=1459552"
*Disclosure: Some of the links above are affiliate links, meaning, at no additional cost to you, Fandom will earn a commission if you click through and make a purchase. Community content is available under CC-BY-SA unless otherwise noted.