J. K. Rowling: A Year in the Life is a documentary that was filmed by James Runcie. The film follows J. K. Rowling over the course of a long year as she completes her work on the last Harry Potter novel, Harry Potter and the Deathly Hallows.

This documentary also includes many extensive interviews with J. K. Rowling, as well as several clips of her promoting Deathly Hallows and at the launch.

This documentary was screened in the United Kingdom on Sunday 30 December 2007, on channel ITV and on Seven Network in Australia on 13 July, 2008. It was also aired on the ABC Television Network in America on Thursday, 16 July, 2009 from 8-9pm (ET), the weekend of the release of the film Harry Potter and the Half-Blood Prince.[1]

J. K. Rowling: A Year in the Life was later included on the "Special Features" DVD of Harry Potter and the Half-Blood Prince. 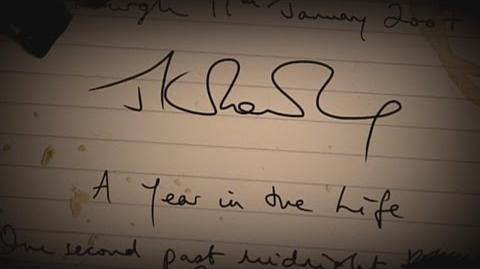 This article or section is a stub. You can help by expanding it.
Deutsch Español Français Polski Русский
*Disclosure: Some of the links above are affiliate links, meaning, at no additional cost to you, Fandom will earn a commission if you click through and make a purchase. Community content is available under CC-BY-SA unless otherwise noted.
Advertisement