In her career, she has won two Academy Awards. She won Best Actress in a Leading Role in 1970 for The Prime of Miss Jean Brodie, and Best Actress in a Supporting Role in 1978 for California Suite and two Primetime Emmy awards for Outstanding Lead Actress in Miniseries or a Movie for My House in Umbria and Outstanding Supporting Actress in Miniseries or a Movie for Downton Abbey. Additionally, Smith has won five BAFTAs, and one Tony Award for her stage work.

Maggie Smith's career began at the Oxford Playhouse in the 1950s. She made her film début in 1956 as one of the party guests in a film called Child in the House. After that she has been acting with the most prominent actors and actresses in the world in over sixty films and TV-series, which include The Prime of Miss Jean Brodie (1969), California Suite (1978) with Michael Caine and Jane Fonda, A Room with a View (1985), Hook (1991) with Dustin Hoffman, Robin Williams and Julia Roberts, Sister Act and Sister Act II: Back In The Habit (1992-1993) with Whoopi Goldberg, Franco Zeffirelli's Tea with Mussolini (1999) with Judi Dench, Joan Plowright and Cher; and Gosford Park (2001) with Kristin Scott Thomas and Clive Owen, directed by Robert Altman. Maggie Smith has also been nominated for an Oscar six times, and won twice for The Prime of Miss Jean Brodie (1969) and California Suite (1978).

In 2001, Maggie Smith made her appearance in the Harry Potter film series as the formidable Professor McGonagall.

In 2011, she voiced the animated character of "Lady Bluebury" in Gnomeo & Juliet.

Maggie Smith was born in Ilford, Essex on 28 December, 1934 to Margaret and Nathaniel Smith. Her father was pathology laboratory technician at Oxford University, and her mother worked as a secretary. She attended Oxford High School until the age of 16.

Smith has been married twice. First on 29 June, 1967 to actor Robert Stephens and had two sons with him, Chris Larkin and Toby Stephens, both actors. She and Stephens divorced on 6 May, 1974. On 23 August, 1975 she married playwright Beverly Cross and the marriage ended with his death on 20 March, 1998. Smith was, at the time, appearing in the play A Delicate Balance, but she continued until the end of the run.

In 2007 she was diagnosed with breast cancer, but struggled through the filming of Half-Blood Prince (2008) while undergoing the chemo treatments. In 2009, during the filming of Deathly Hallows: Part 2 she developed Shingles (a painful skin rash), but still continued the film despite the pain. 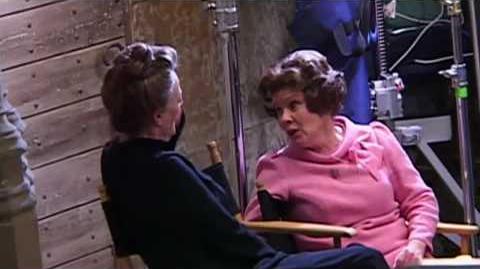 Maggie Smith and Imelda Staunton
Behind the Scenes

The Harry Potter Wiki has 14 images related to Maggie Smith.

Retrieved from "https://harrypotter.fandom.com/wiki/Maggie_Smith?oldid=1389072"
*Disclosure: Some of the links above are affiliate links, meaning, at no additional cost to you, Fandom will earn a commission if you click through and make a purchase. Community content is available under CC-BY-SA unless otherwise noted.