Magical Congress of the United States of America

President of the Magical Congress of the United States of America

Govern the magical community of the United States of America

"MACUSA was modelled on the Wizards’ Council of Great Britain, which predated the Ministry of Magic. Representatives from magical communities all over North America were elected to MACUSA to create laws that both policed and protected American wizardkind."
—Description[src]

The MACUSA performs many of the same functions as other wizarding governing bodies in other countries such as the Ministries of Magic or Councils of Magic.[5]

MACUSA was modelled on the Wizards’ Council of Great Britain, which predated the Ministry of Magic. Representatives from magical communities all over North America were elected to MACUSA to create laws that both policed and protected American wizardkind.[8]

In MACUSA’s early years, its primary aim was to rid the continent of Scourers, corrupt wizards who had hunted their fellow magical beings for personal gain. MACUSA’s second great law enforcement challenge was the number of wizarding criminals who had fled to America from Europe and beyond, precisely because of the lack of organised law enforcement such as existed in their own countries.[9]

The building that houses the Magical Congress of the United States of America is about as imposing as Gringotts bank. It’s vast and grand. Covered in gold, emerald, maroon and black. Swarming with witches, wizards and Aurors on magical business. It’s the American equivalent of the Ministry of Magic, so it has similar levels of ominous grandeur.[10]

In the 1920s, MACUSA's main hall within the Woolworth Building was several hundred feet tall, filled with light and featuring black and gold accents. It contained a large Magical Exposure Threat Level Measurer above the front staircase along with a magical portrait of President of the Magical Congress of the United States of America Seraphina Picquery. High in the air is a giant dial with multiple clock-like faces and hands pointing to the present threat-level to the secrecy of the wizarding world.

When Newt Scamander first visited MACUSA in 1926, busy witches, wizards, and owls were bustling about the lobby and a house-elf was shining wands. Various exposed, black colored elevators with golden grilles transport the wizards up and down the hundreds of levels.

At the centre of the main room was a monument with four columns featuring Phoenix statues. In the middle was a group of statues commemorating those who died in the Salem Witch Trials. Under the monument are four words — Integritas, Unitas, Virtus, Magia which mean Integrity, Unity, Valour, and Magic.[11]

Around the exterior of the hall were desks and columns topped with statues of the original twelve Aurors.[12]

"Unlike most Western countries, there was no cooperation between the No-Maj government and MACUSA."
—MACUSA's strict rule regarding Muggle relations[src]

The Magical Congress of the United States of America was established in 1693 with the introduction of the International Statute of Secrecy, as a direct result of the Salem Witch Trials. Thus this means that MACUSA pre-dates the No-Maj formation of the United States of America by around a century.[1] One of representatives was Josiah Jackson, who became the first President of MACUSA. Josiah was thought to be strong enough to deal with the troubles caused by the Salem Witch Trials.[2]

The first task of the North American wizarding legislature was to put on trial the Scourers, a unscrupulous and brutal band of wizarding bounty hunters and racketeers, executing those convicted of murder, wizard-trafficking, and torture.[1] Josiah Jackson's main priority when he became President was to create and train Aurors. There were only a select few to start with, with only two of them surviving to old age. They won the enduring respect of the magical community in North America, which was extended to their descendants.[2]

MACUSA has had to move its location at least five times since its inception. Originally, MACUSA had no definite meeting place and moved around so it would not be detected by No-Majs.[2]

Due to the fact that America had a very hostile relationship between magical and non magical people, there was no cooperation between MACUSA and the No-Maj government.[2]

Eventually, MACUSA created an enchanted edifice in the Appalachian Mountains as their headquarters. However, they had to change it as it was in an inconvenient location.[2]

In 1760, MACUSA relocated to Williamsburg in Virginia where then President Thornton Harkaway lived. Harkaway bred Crups, which possess a great aggression towards non-magical people. When the crups attacked local No-Majs, it led to a great breach of the Statute of Secrecy and Harkaway had to step down due to disgrace.[2]

MACUSA then relocated to Baltimore, where President Able Fleming lived. However, when the Revolutionary War began, MACUSA decided to move to what would become Washington, decades before the No-Maj Congress even built the city.[2]

In 1777, then President Elizabeth McGilliguddy presided over the infamous Country or Kind? debate. It was an extraordinary meeting which led to the expansion of the Great Meeting Chamber. They discussed whether to support their community or their country and whether to fight for liberation from the British Muggles. They also debated whether it was really their fight. The argument did not go well and it led to a fight. Pro-interventionists argued that by intervening, they could save lives, while anti-interventionists believed that they would reveal their community by intervening and place it in danger. They sought the advice of the Ministry of Magic to find out whether they intended to intervene on their side and they replied with only a four word letter — "Sitting this one out". McGilliguddy replied with an even shorter message stating — "Mind you do".[2]

Ultimately, they did not intervene, but they did attempt to protect their No-Maj neighbours unofficially and celebrated Independence Day.[2]

Due to the indiscretions of the dim-witted witch Dorcus Twelvetrees, the then President Emily Rappaport created Rappaport's Law, which would enforce strict segregation between the No-Maj and wizarding communities. Henceforth, wizards were no longer allowed to befriend or marry No-Majs, and penalties of such fraternisation were harsh. Communication was also limited to that necessary to perform daily activities. During this time, MACUSA worked strictly independent of itself from the No-Maj government to decrease the possibility of exposure.

Under Rappaport's Law, MACUSA continued to avoid communication with the No-Maj community for many years, and MACUSA also continued to impose severe penalties on those who disobeyed the International Statute of Secrecy.

After the Great Sasquatch Rebellion of 1892, MACUSA was forced to relocate its headquarters for the fifth time in its history, and moved from Washington to New York City at the Woolworth Building where it remained throughout the 1920s. The rebellion was blamed on Irene Kneedander, Head of the Body for the Protection of Magical Species. Kneedander had taken to attacking a Sasquatch that had done something wrong which led to their decision to rebel. It had led to great Obliviations in Washington.[2]

They needed a new headquarters, and over the course of several years, wizards infiltrated the construction team of a new building in New York. By the time the Woolworth Building was completed it could both house No-Majs and — if activated by the correct spells — transform into a space for wizards. The only outer mark of their new secret location was the owl carved over the entrance.[2]

"Magical beasts are terrorising No-Majs. When No-Majs are afraid, they attack. Contain this or it will mean war."
—1920s America was a hostile period[src]

Sometime at the end of the 19th century, legislation was introduced which would require all American wizards and witches to have a permit allowing them to carry a wand. This was a measure that was intended to keep tabs on all magical activity and identify the perpetrators by their wands, thus making the concealment of magic easier. Rappaport’s Law was still in operation in the 1920s and several offices in MACUSA had no counterpart in the Ministry of Magic.

Unlike the No-Maj community, which had a strict Prohibition law against alcohol for many years, MACUSA allowed the wizarding community to consume alcohol, though many criticised this policy, pointing out that it made witches and wizards rather conspicuous around sober No-Majs. However, the then President Seraphina Picquery stated that being a wizard or witch in America was already hard enough. At one point she famously told her Chief of Staff that the "Gigglewater was non-negotiable." Newt Scamander also visited MACUSA during the 1920s.

It is known that House elves worked at MACUSA during the 1920s. One such House-elf was cleaning wands.[13] A significant difference between the wizarding governments of the United States and the UK of this time was the penalty for a serious crime. Whereas British witches and wizards were sent to Azkaban, the worst criminals in America were executed.

In the 1920s, the President of MACUSA was Seraphina Picquery from Savannah. The Department of Magical Law Enforcement was headed by Percival Graves, a well-respected descendant of one of the original twelve American Aurors.

Following the kidnapping of Hans the Augurey by American fans celebrating the American team's success in the quarter-finals of the 2014 Quidditch World Cup against Liechtenstein, several terse letters were exchanged between President Quahog and Otto Obermeier, Minister for Magic of Liechtenstein.[5] Luckily, Hans was returned the following day, 9 June 2014, and the relationship between the two countries seemed not to have been too damaged.[5]

The first dozen volunteers to train as Aurors in the US have a special place in United States’ wizarding history, in part due to their sacrifice. Their descendants have been given particular respect ever since. Of these twelve, only two survived into old age: Charity Wilkinson, who would become MACUSA’s third President, and Theodard Fontaine, whose direct descendant Agilbert is the present day Headmaster of Ilvermorny School of Witchcraft and Wizardry.[2] Another vital part of the Law Enforcement Offices are the U.S. Auror Divisions, which conduct Auror as well as police work.

Also of note are Gondulphus Graves, ancestor to Percival Graves, whose family remains influential in American wizarding politics and Abraham Potter, who genealogists would discover centuries later was distantly related to the famous Harry Potter.[2]

As with most other magical governing bodies, the Department of Magical Law Enforcement is the largest department in MACUSA.

The Magical Congress of the United States of America is a large body of government and thereby has many different positions and departments located with the congress.

Most of the departments listed have either something to do with magical law or No-Maj relations, as MACUSA spent a large amount of its resources toward keeping the American Wizarding community hidden from No-Majes.

Main article: President of the Magical Congress of the United States of America

MACUSA logo as seen on Magic in North America 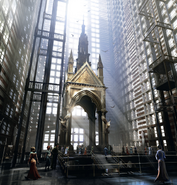 Retrieved from "https://harrypotter.fandom.com/wiki/Magical_Congress_of_the_United_States_of_America?oldid=1179463"
*Disclosure: Some of the links above are affiliate links, meaning, at no additional cost to you, Fandom will earn a commission if you click through and make a purchase. Community content is available under CC-BY-SA unless otherwise noted.