"Mandrake, or Mandragora, is a powerful restorative. It is used to turn people who have been transfigured or cursed to their original state. The cry of the Mandrake is fatal to anyone who hears it."
—Hermione Granger on the properties and abilities of the plant[src]

A Mandrake, also known as Mandragora, was a magical and sentient plant which had a root that looked like a human (like a baby when the plant is young, but maturing as the plant grows). When matured, its cry could be fatal to any person who heard it.[1]

Whenever unearthed, the root screams. The scream of a mature Mandrake when it is unearthed will kill any person who hears it, but a young Mandrake's screams will usually only knock a person out for several hours. When Hogwarts students study Mandrakes in Herbology class, Pomona Sprout had the students wear earmuffs to protect their ears from the Mandrake's cries.[1]

Mandrakes not only resemble humans, but also have similar behaviours to them. In the 1992-1993 school year, the Mandrakes, at one point of time, became moody and secretive, which indicated that they were reaching adolescence.[4] Later on, they threw a loud and raucous party, which is comparable to humans when they are teenagers, which made Pomona Sprout very happy indeed.[5] Rubeus Hagrid also mentioned the Mandrakes having acne. Mandrakes are fully matured when they start moving into each others' pots. When matured, Mandrakes can be cut up to serve as a prime ingredient for the Mandrake Restorative Draught, which is used to cure those who have been Petrified.[2][6]

A Mandrake's scream is very similar to (if not the same as) a banshee's scream, which is also fatal.

The Dugbog's favourite food is Mandrakes, which leads to Mandrake-growers finding nothing but a bloody mess when pulling their plants out.[7] Flesh-Eating Slugs are known to favour eating Mandrakes as well.[8]

Stewed Mandrake is used in Potion-making, forming an essential part of most antidotes.[1] Their leaves are also used in potions as well.[9]

Mandrakes are part of the second-year Herbology curriculum at Hogwarts School of Witchcraft and Wizardry.[1] In the 1992-1993 school year, the school's growth of Mandrakes served the additional purpose of making a Restorative Draught to revive all those who had been Petrified during the Chamber of Secrets openings.[2]

During the Battle of Hogwarts, Professor Sprout, Neville Longbottom, and other students, lobbed Mandrakes over the Castle's battlements to attack the Death Eaters.[3]

During the Calamity which affected the wizarding world in the 2010s, Mandrakes were amongst the various magical items caught up as Foundables which had to be dealt with by members of the Statute of Secrecy Task Force.[11]

The (European) Mandrake plant has been used since ancient times as a medicinal plant and has a tradition associated with magical activities and witchcraft. It is a member of the nightshade family. It contains hyoscyamine, scopolamine, and mandragorin. Medically, it has been used as a pain killer and a sedative. It was used in ancient times for surgery. An overdose, though, can be fatal.

Because of its roots' shapes resembling humans, it has been used in magical operations, and as a supposed aphrodisiac. There are variations on the plant, Mandragora Offininarum being the most usual form, with the smaller Mandragora autumnalis having the same properties. Some folk traditions call the latter (M. autumnalis) variety as "Womandrake" in distinction to M. Officinarum as "Mandrake." A third variant, Mandragora turcomanica, is a nearly extinct and very rare variety, found mostly in Turkey and a few areas of Iran. M. turcomanica is distinguished from M. autumnalis by having larger fruit. 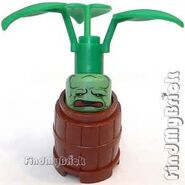 The LEGO portrayal of a Mandrake 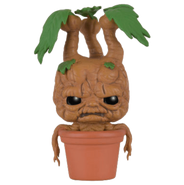 A Mandrake as a POP! Vinyl

A baby Mandrake as shown in Harry Potter: Wizards Unite

A Mandrake as seen in Harry Potter: Puzzles & Spells 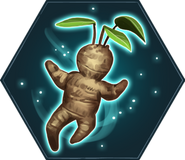 A Mandrake as seen in Harry Potter: Hogwarts Mystery
Add a photo to this gallery

The Harry Potter Wiki has 51 images related to Mandrake.

Retrieved from "https://harrypotter.fandom.com/wiki/Mandrake?oldid=1393763"
*Disclosure: Some of the links above are affiliate links, meaning, at no additional cost to you, Fandom will earn a commission if you click through and make a purchase. Community content is available under CC-BY-SA unless otherwise noted.