"I — I will never forget it. I still dream about it sometimes. A crater in the middle of the street, so deep it cracked the sewer below. Bodies everywhere. Muggles screaming. And Black standing there laughing, with what was left of Pettigrew in front of him...a heap of bloodstained robes and a few — a few fragments."
—Cornelius Fudge's incorrect assumptions of what happened that morning[src]

The Massacre in London occurred on 1 November, 1981 when Peter Pettigrew killed twelve Muggles with a Blasting Curse, leading to the false conviction and imprisonment of Sirius Black. This event was one of the most infamous massacres in recent times.[4]

"I persuaded Lily and James to change to Peter at the last moment, persuaded them to use him as Secret-Keeper instead of me...."
—Sirius Black discusses the Secret-Keeper gambit[src]

When James and Lily Potter prepared to go into hiding from Lord Voldemort in October of 1981, they decided to put a Fidelius Charm over their home as part of their protection. Friends such as Albus Dumbledore and Sirius Black offered to be their Secret-Keeper, but they ultimately decided that a more unlikely choice would be safer, and picked Peter Pettigrew; Sirius did not choose another friend, Remus Lupin, as Lupin was more likely a more obvious choice .[4]

Unbeknownst to them, Peter was a double agent actually working for Voldemort, and quickly turned the location of the Potters over to his master. Though he would be unsuccessful at killing Harry Potter due to Lily's sacrificial protection and was reduced to a mere broken soul without a body for over a decade, Voldemort did managed to kill both James and Lily thanks to Peter's betrayal. Upon seeing the Potter's cottage in ruin, Pettigrew deduced what happened and retrieved Voldemort's wand to prevent the Ministry from inspecting it to discover his treason. Sirius deduced Peter's backstabbing from a lack of struggle at his hiding place.[4] 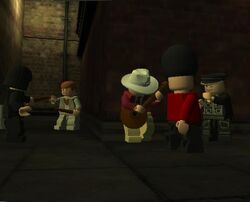 The following day, 1 November, Sirius Black cornered Peter Pettigrew on a street in London,[1] intending to kill Peter for his betrayal. Pettigrew loudly accused Black of betraying the Potters. Before Black could stop him, Pettigrew cleverly set off a Blasting Curse, killing twelve innocent Muggles and leaving a massive crater in the street to expose the sewer pipes below, thereby creating a diversion. Amid the chaos, Pettigrew quickly cut off one of his fingers, took on his rat form, and fled the scene. Thinking Pettigrew had been a casualty of the explosion, Black began laughing maniacally.[4]

Over fifty Muggle witnesses reported what Pettigrew said to Ministry of Magic officials. As this left a large amount of incriminating evidence against Sirius Black, he was arrested and, without a trial, sent to Azkaban for the next twelve years. Peter would later make his way into the ownership of the Weasley family as a pet rat, and was owned by Ronald Weasley by the time of Sirius's escape.[4]

The Ministry of Magic had difficulty covering up this event given the extent of the damage and the number of Muggle casualties.[5] They erased the memories of surviving Muggle witnesses[3] and disseminated the story that the explosion had been caused by a leak in a gas main.[5]

It was not until 1993 that Remus Lupin realised Black was innocent and convinced Harry Potter, Ron Weasley, and Hermione Granger to believe the truth. Together, he and Black exposed Pettigrew's true form,[4] but before they could turn him in, he fled, soon to rejoin Lord Voldemort.[6] Nevertheless, Cornelius Fudge ignored their stories, and the Ministry continued to consider Black guilty until after his murder at the hands of Bellatrix Lestrange in the Battle of the Department of Mysteries on 18 June, 1996.

Retrieved from "https://harrypotter.fandom.com/wiki/Massacre_in_London?oldid=1297415"
*Disclosure: Some of the links above are affiliate links, meaning, at no additional cost to you, Fandom will earn a commission if you click through and make a purchase. Community content is available under CC-BY-SA unless otherwise noted.