"I shall attend to the boy in person. There have been too many mistakes where Harry Potter is concerned, Some of them have been my own. That Potter lives is due more to my errors than to his triumphs. I have been careless, and so have been thwarted by luck and chance, those wreckers of all but the best-laid plans. But I know better now. I understand those things that I did not understand before. I must be the one to kill Harry Potter, and I shall be."
— Lord Voldemort's announcement during the meeting[src]

This meeting at Malfoy Manor was a gathering of Death Eaters and supporters of Lord Voldemort (who were present at the meeting) in the summer of 1997 during the height of the Second Wizarding War.[1]

The meeting took place during the week preceding the Battle of the Seven Potters, and happened at Malfoy Manor, in Wiltshire, England, the home of Lucius and Narcissa Malfoy and their son, Draco, being used as a Death Eater headquarters for Voldemort. The purpose of the meeting was to discuss the Death Eater's subsequent take-over of the Ministry and for Voldemort to hear Severus Snape relay information useful in the plotting the murder of Harry Potter.[1]

By the summer of 1997, Lucius Malfoy and many other Death Eaters had escaped Azkaban prison, and the Dark Lord had made the Malfoys' home his headquarters. While the Malfoys were very uncomfortable with this, Bellatrix Lestrange, Lucius's sister-in-law, who also resided there, claimed there could be "no higher pleasure" than having Lord Voldemort stay with them.[1]

Harry Potter/infiltration of the Ministry

Corban Yaxley: "My Lord, I have heard differently. Dawlish, the Auror, let slip that Potter will not be moved until the thirtieth, the night before the boy turns seventeen."
Severus Snape: "My source told me that there are plans to lay a false trail; this must be it. No doubt a Confundus Charm has been placed upon Dawlish. It would not be the first time; he is known to be susceptible."
Corban Yaxley: "I assure you, my Lord, Dawlish seemed quite certain."
Severus Snape: "If he has been Confunded, naturally he is certain. I assure you, Yaxley, the Auror Office will play no further part in the protection of Harry Potter. The Order believes that we have infiltrated the Ministry"
— Yaxley and Snape during the meeting[src]

Shortly before Harry Potter's seventeenth birthday, Severus Snape and Corban Yaxley entered Malfoy Manor and found Voldemort sitting at a table with gathered Death Eaters. Voldemort gently chastised them for nearly being late and then instructed Snape to sit at his right and Yaxley next to Antonin Dolohov. Snape then informed Voldemort that the Order of the Phoenix was moving Harry Potter from the Dursley home to a secret location the following Saturday, four days before his birthday, at sunset. Snape reported that the information came, "from the source [they] discussed." This contradicted the information that Yaxley obtained from John Dawlish, an Auror, but that was determined to be unreliable; Snape suspected the Ministry had been infiltrated, and was feeding them with false information to deceive them.[1]

Yaxley reported that he had succeeded in placing Pius Thicknesse, the Head of the Department of Magical Law Enforcement, under the Imperius Curse, a major step in taking over the Ministry of Magic. However, Voldemort replied that Thicknesse was only one man, "and Scrimgeour must be completely surrounded by our people before I act." Yaxley discussed how it would be easier to take over the Ministry with Thicknesse under their control, as he had regular contact with the Minister and the other department Heads, the latter which he could be made to be brought under the Imperius curse to do the Death Eaters' bidding and help bring down the Ministry. The resulting plans would lead to Voldemort's take-over of the Ministry, using Thicknesse as a puppet Minister for Magic, and the Battle of the Seven Potters.[1]

Voldemort: "As I was saying, I understand better now. I shall need, for instance, to borrow a wand from one of you before I go kill Potter...No volunteers? Let's see...Lucius, I see no reason for you to have a wand anymore."
Lucius: "My Lord?"
Voldemort: "Your wand, Lucius. I require your wand."
— Voldemort taking Lucius Malfoy's wand[src]

After the Priori Incantatem effect during the duel in Little Hangleton, Voldemort knew that he would need a different wand to use against Harry as his wand and Harry's shared the same wand core, a phoenix tail feather from Fawkes. Because of this, Voldemort was unable to fatally harm Harry. He told the gathered Death Eaters that if he was to kill Harry Potter he would have to do it with someone else's wand, and asked if anyone would volunteer their wand for the honour.[1]

No one did, as a wizard or witch rarely wants to part with his or her wand. However, Voldemort eventually decided to take Lucius Malfoy's wand, to further humiliate him after Lucius's failure during the Battle of the Department of Mysteries to retrieve a prophecy Voldemort desired. After that battle, Lucius was arrested and sent to Azkaban, but when he broke out Voldemort punished him by forcing his son to kill Albus Dumbledore, but it was eventually done by Snape. As further punishment, Voldemort took over Malfoy's house to be their meeting place and told Lucius to hand over his wand. Lucius reluctantly obliged, and the wand was later destroyed during the Battle of the Seven Potters when Harry's wand regurgitated some of Voldemort's own magic back at him. Therefore, Lucius's wand was no match for this sort of power.[1]

Voldemort: "I'm talking about your niece, Bellatrix. And yours, Lucius and Narcissa. She just married the werewolf, Remus Lupin. You must be so proud."
Bellatrix: "She is no niece of ours, my Lord. We — Narcissa and I — have never set eyes on our sister since she married the Mudblood. This brat has nothing to do with either of us, nor any beast she marries."
Voldemort: "What say you, Draco? Will you babysit the cubs?... Many of our oldest family trees become a little diseased over time. You must prune yours, must you not, to keep it healthy? Cut away those parts that threaten the health of the rest."
— Voldemort discussing blood purity with the Death Eaters[src]

After Lucius was humiliated by Voldemort taking his wand, Voldemort taunted Lucius about how the Malfoy family was unhappy to have him in their home. Though Lucius protested, Voldemort saw through his lies, and Voldemort further asked why the Malfoys were unhappy despite professing that his return to power was what they desired for so many years.[1]

Lucius denied this, and Bellatrix Lestrange boasted that she, unlike her sister, Narcissa, considered there was "no higher pleasure" to have him in their house. Despite this show of loyalty, Voldemort proceeded to humiliate and insult her by japing about her niece having recently married a werewolf; while the gathering Death Eaters laughed jeeringly, Bellatrix furiously declared that she was no niece of theirs. After the mockery, Voldemort told Bellatrix to prune her family tree by getting rid of those who diseased it, to which Bellatrix readily agreed, and Voldemort told the gathered Death Eaters about the importance of cutting away "the canker that infects us until only those of true blood remain".[1]

"Not content with corrupting and polluting the minds of Wizarding children, last week Professor Burbage wrote an impassioned defence of Mudbloods in the Daily Prophet. Wizards, she says, must accept these thieves of their knowledge and magic. The dwindling of the purebloods is, says Professor Burbage, a most desirable circumstance.... She would have us all mate with Muggles... or, no doubt, werewolves.... Avada Kedavra! Dinner, Nagini."
— Voldemort speaking before murdering Charity Burbage[src]

Above the table Voldemort and his followers were seated at, a bound figure was suspended upside down, slowly rotating. The captive, awake and sobbing, pled for help from an impassive Snape. Voldemort ruthlessly cast a Killing Curse at the woman, Professor Charity Burbage, the Muggle Studies teacher at Hogwarts School of Witchcraft and Wizardry, for teaching the subject and for publishing an opinion suggesting that the declining pure-blooded wizard population was actually beneficial and that blood purity should no longer matter, in the Daily Prophet. Her body was given to Nagini as the snake's dinner.[1]

Impact of the meeting

The Death Eaters' actions at the meetings gave much insight into how Voldemort's ranks were assembled. Despite Voldemort having gathered key supporters around him, there was little solidarity among them, which showed a major difference between the Death Eaters and the Order of the Phoenix. The Death Eaters constantly competed with one another to ascend in the Dark Lord's eyes, and many were affronted that Snape, who was still regarded with suspicion by others, was invited to sit at Voldemort's right hand while the Malfoys occupied a lower position at the foot of the table. It was obviously galling to them and showed how far and how quickly they had fallen from favour, particularly Lucius Malfoy, whose arrogance and wealth had, until then, shielded his rather weak and cowardly character. Wormtail was considered the lowest of the Death Eaters, being little more that a jailer and a skivvy.[1]

This desire to please Voldemort proved to be futile, as Voldemort had shown that he demanded absolute loyalty and servitude while offering his followers little in return. Such meetings created an atmosphere where disharmony could quickly set in, prompting Voldemort's followers to seek their own reward any way they could, even by turning against another. Even his most ardent follower, Bellatrix Lestrange, was taunted by Voldemort, who likely considered her "tainted" for being related to the Malfoys (her sister, brother-in-law, and nephew) and also to the Tonks clan.[1] In the Order, however, the organisation rallied around Harry in a unified goal to protect him and defeat Voldemort; this was far more important than material gains or an individual's status within their group, and it served to strengthen, rather than divide them.[3]

The murder of Charity Burbage showed the disgust of mixed blood relations to Voldemort and the Death Eaters. Killing Burbage may also have been a means for Voldemort to test Snape's loyalty by gauging his reaction to it, to see if he registered any emotion or attempted to intervene in any way, for any reason, to spare Burbage's life.[1] Snape was loyal to Dumbledore, and likely felt remorse for her murder, yet did not display such remorse to Voldemort.[4]

The known people who attended the meeting were the following: 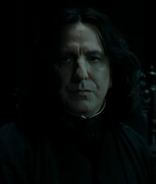 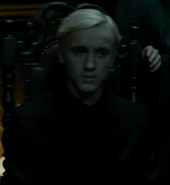 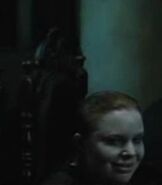 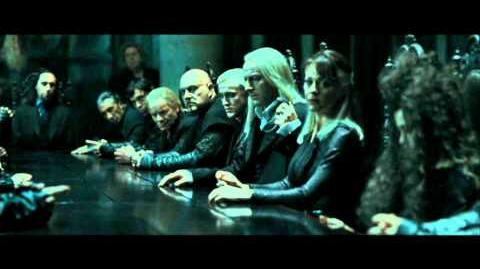