No fixed limit; there must be elections at a maximum interval of seven years (British)

Chief of the Wizards' Council

"They wanted Dumbledore fer Minister, o' course, but he'd never leave Hogwarts, so old Cornelius Fudge got the job. Bungler if ever there was one. So he pelts Dumbledore with owls every morning, askin' fer advice."
— Rubeus Hagrid and Harry Potter discuss the Minister for Magic[src]

In Great Britain, the Minister was advised on wizarding matters by their staff members and by the other Heads of Departments. They also chaired the Wizengamot to pass Wizarding Laws, or to hear important trials (such as Harry Potter's case), though the verdicts were decided by majority vote, including that of the Minister themselves. Many other wizarding countries also had Ministers and had similar governmental systems, such as the Bulgarian Minister or the Zauberminister of wizarding Germany.[1]

Despite being the head of their respective wizarding communities, it was common for the Minister to uphold a facade of peace and safety to maintain control and the satisfaction of the public, even if it meant blatantly lying to the citizens, putting them at risk, and forcing the media to corroborate the Ministry's claims. This was a sign of the corruption during the times of the Second Wizarding War.[2][3]

The Minister for Magic was formally appointed in 1707 when Ulick Gamp was voted in as the first Minister for Magic. Ministers were democratically elected through a public vote, and there was no fixed limit to a Minister's term in office. However, regular elections had to be held at a maximum interval of seven years.[1]

When the Ministry of Magic was established in 1707, the man appointed as the first Minister for Magic was Ulick Gamp, formerly Chief Warlock of the Wizengamot.[1]

After Millicent Bagnold was preparing to retire in 1990, Albus Dumbledore was expected to take the position of Minister, but he believed that due to his past, he could not be trusted with that power, so because of this, Barty Crouch Snr was the next prime candidate, due to his cruel but effective methods of combating the Dark Arts during the First Wizarding War, until he sentenced his son to Azkaban for being a Death Eater.[4] It was after his son's presumed death that the public began to take pity on the boy and thought Crouch Snr was too neglectful as a father, which led to a drop in his popularity, causing him to lose out to Fudge.

Cornelius Fudge was Minister from 1990 to 1996. During his first days in office, he was not very confident and, as a result, constantly bombarded Dumbledore with letters for advice.[5] During the last year of his tenure, Fudge was overcome by self-induced persecution delusions, because Dumbledore 'claimed' Voldemort had returned, and abused his own position to prevent that news from spreading, in order to protect both his position of power and the peace that the Ministry had worked so hard to maintain.[3]

In the end, when Fudge was forced to accept that Voldemort had indeed returned,[6] the entire wizarding community called for his resignation, and after a fortnight of futile attempts to remain in office, in July 1996 he was replaced by Rufus Scrimgeour.[7] Fudge's love for his office blinded him from the truth, and, as he was warned, his denial led him to be known as one of the least effective and disgraced Ministers in history.

Scrimgeour's term ran for one year, in which he attempted to restore peace and control throughout the Wizarding World. Although he was beaten in the end, Scrimgeour was being honest and accepted the fact that the Ministry were many steps behind Voldemort, (even though this was the fault of his predecessor, Cornelius Fudge).[7][8] Unfortunately, he was killed in an attack by an army of death eaters of the First of August, 1997.[9] He was replaced by Voldemort's puppet, Pius Thicknesse.[10]

Thicknesse, under Corban Yaxley's Imperius Curse,[11] was appointed as Minister, though he was really only Voldemort's puppet, with the Dark Lord effectively becoming the true Minister. While Thicknesse was to handle everyday business, which included changing the entire Ministry to suit the Death Eaters' ideology, Voldemort was free to extend his reign beyond the government. Voldemort did not announce himself Minister, but instead kept himself hidden in the shadows, in order to plant uncertainty and doubt within the wizarding community, preventing them from trusting anyone and forming any rebellion that could overwhelm the Ministry and the Death Eaters.[10] Because of his subjugation, Thicknesse's role as Minister was omitted from most official records.

By the end of the war, Kingsley Shacklebolt was appointed as temporary Minister, the position later becoming permanent. His term led to the revolutionising of the entire Ministry, removing any and all corruption that had permeated it before and during the takeover. One of his first and most effective acts as Minister, was replacing Dementors, the unreliable guards of Azkaban, with Aurors.

By 2019, Hermione Granger had succeeded Kingsley Shacklebolt as Minister for Magic. And she, like Shacklebolt, made very effective decisions as Minister.[12] 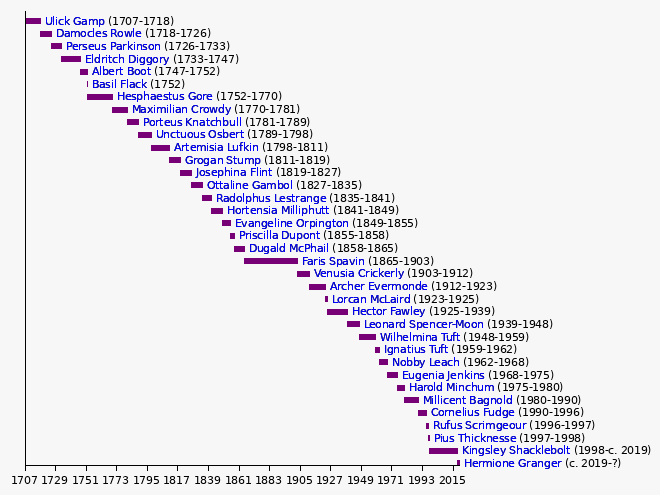 Relationship with the Muggle Prime Minister

One of the Minister for Magic's duties was to correspond with the British Prime Minister of Muggles regarding any ongoing events in the wizarding world that would or could affect the United Kingdom as a whole, eg Voldemort's return. This included introducing themselves to the Muggle Prime Minister when there was a change in office on either side.

A small portrait in the corner of the Prime Minister's office served as an envoy between the two Ministers. It announced the arrival of the Minister for Magic, seeking the Prime Minister's reply (usually acquiescence to the unavoidable). It is believed that a Permanent Sticking Charm must have been placed on the portrait, for neither the Prime Minister nor his experts were able to remove it from its location.

Sometime between 1990 and 1993, Fudge introduced himself to the newly elected Muggle Prime Minister and informed him of the existence of the magical population living among Muggles in secret. Fudge assured the Muggle Prime Minister that they would likely not see each other again unless there was an emergency. Fudge also claimed that the previous Prime Minister had tried to throw him out of the window, believing him to be a hoax planned by his political opposition.

In around July 1993, Fudge visited the Prime Minister's office again, to inform him of Sirius Black's breakout from Azkaban, the wizard prison. On this visit, Fudge also told the Prime Minister about Voldemort, in order to allow the Prime Minister to have an in-depth understanding of what was going on, though as he dared not say the name out loud, he instead scribbled it on a piece of paper.

In August 1994, Fudge turned up to report on the fiasco at the Quidditch World Cup, since its victims included Muggles. He also informed a bewildered Prime Minister that the Ministry of Magic would be importing dragons and a sphinx into Great Britain for the Triwizard Tournament, taking place at Hogwarts later that year.

Sometime prior to July 1996, a flustered Fudge appeared in the Prime Minister's office briefly to inform him that there had been a mass breakout from Azkaban, the wizard prison.

Around July 1996, Fudge turned up and announced to the Prime Minister that the Second Wizarding War had begun, and admitted that the Dark forces in their community were responsible for the various gloomy and tragic events occurring in the Muggle world. In addition, Fudge introduced his successor, Rufus Scrimgeour.

When Voldemort took over the Ministry of Magic, it was possible that the puppet Minister Pius Thicknesse was not sent to meet the Muggle Minister, as was the tradition in the past, due to the Death Eaters' attitudes towards Muggles and Muggle-borns. However, once Kingsley Shacklebolt was appointed Minister in 1998, it is possible, if not likely, that he did meet with the Prime Minister to not only introduce himself (indeed, he had been put in as secretary to the Prime Minister in 1996 to watch over his security)[13] but to assure the Muggle Minister that the war had ended.

When Hermione Granger was appointed Minister around 2019, she, like her predecessors, likely also introduced herself to the incumbent Prime Minister.

Dansk Deutsch Deutsch Español Suomi Français Italiano 日本語 Nederlands Norsk Polski Русский Svenska Українська
*Disclosure: Some of the links above are affiliate links, meaning, at no additional cost to you, Fandom will earn a commission if you click through and make a purchase. Community content is available under CC-BY-SA unless otherwise noted.
Advertisement