"As obsessive fans will tell you, I do slip up! Several classrooms move floors mysteriously between books and these are the least serious continuity errors! Most of the fansites will point you in the direction of my mistakes. But the essentials remain consistent from book to book because the story has been plotted for a long time and it is clear in my mind."
—J. K. Rowling on the errors within the franchise[1]

Below is a list of mistakes that occur in the Harry Potter book series, such as plot holes and typos. Some of these mistakes were fixed in later editions of the same book.[2]

Harry Potter and the Philosopher's Stone 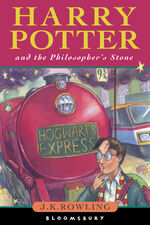 Chapter 1: The Boy Who Lived

Chapter 3: The Letters from No One

Chapter 6: The Journey from Platform Nine and Three-Quarters

Chapter 16: Through the Trapdoor

Chapter 17: The Man with Two Faces

Harry Potter and the Chamber of Secrets 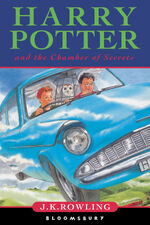 Chapter 4: At Flourish and Blotts

Chapter 9: The Writing on the Wall

Chapter 16: The Chamber of Secrets

Harry Potter and the Prisoner of Azkaban

Chapter 8: Flight of the Fat Lady

Chapter 19: The Servant of Lord Voldemort

Harry Potter and the Goblet of Fire

Chapter 4: Back to the Burrow

Chapter 10: Mayhem at the Ministry

Chapter 11: Aboard the Hogwarts Express

Chapter 16: The Goblet of Fire

Chapter 28: The Madness of Mr Crouch

Harry Potter and the Order of the Phoenix

Chapter 2: A Peck of Owls

Chapter 6: The Noble and Most Ancient House of Black

Chapter 9: The Woes of Mrs Weasley

Chapter 19: The Lion and the Serpent

Chapter 23: Christmas on the Closed Ward

Chapter 27: The Centaur and the Sneak

Chapter 34: The Department of Mysteries

Chapter 35: Beyond the Veil

Chapter 36: The Only One He Ever Feared

Harry Potter and the Half-Blood Prince

Chapter 1: The Other Minister

Chapter 5: An Excess of Phlegm

Chapter 10: The House of Gaunt

Chapter 22: After the Burial

Harry Potter and the Deathly Hallows

Chapter 36: The Flaw in the Plan

Harry Potter and the Cursed Child

Retrieved from "https://harrypotter.fandom.com/wiki/Mistakes_in_the_Harry_Potter_books?oldid=1331677"
*Disclosure: Some of the links above are affiliate links, meaning, at no additional cost to you, Fandom will earn a commission if you click through and make a purchase. Community content is available under CC-BY-SA unless otherwise noted.