This article is about Earth's natural satellite. You may be looking for someone with the surname Moon. 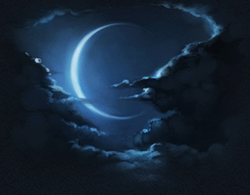 The mooncalf is a creature that only comes out of its burrow during a full moon and then performs a complicated mating dance.[1] The presence of a full moon can induce basilisk eggs to hatch early if given certain other circumstances.[2]

The phases of the Moon influence the making of potions, as studied by Hesper Starky. Veritaserum takes a full moon cycle to mature[3] and when making Polyjuice Potion, the fluxweed for it must be picked during the full moon.[4]

It was believed by medieval Healers that taking the liver of a toad, binding it tight about the victim's throat and standing naked by the full moon in a barrel of eels' eyes would cure spattergroit. Wizards infected with lycanthropy transform into a Werewolf if exposed to the full moon's rays.

Moonlight lit the grounds of the Forbidden Forest in 1992 as Rubeus Hagrid conducted a detention for Harry Potter, Hermione Granger, Draco Malfoy and Neville Longbottom there. During the detention, after an encounter with centaurs, he described them as being "ruddy stargazers" who are "not interested in anythin' closer'n the moon."[5]

In the summer of 1992, moonlight was streaming through the bars of Harry's window in The Smallest Bedroom as Ron, Fred and George Weasley arrived by flying car to rescue him from 4 Privet Drive.[6] As they made their escape, the car "shot suddenly toward the moon" when Fred put his foot down on the accelerator.[7]

At approximately one o'clock in the morning on 31 July, 1993, the moon was large, full and golden, and silhouetted by Errol, Hedwig and an owl sent by Hogwarts School of Witchcraft and Wizardry as they flew to his house with birthday wishes and, in the case of the latter, a form for Harry's guardians to sign so that he could go to Hogsmeade[8]

As Harry Potter went to bed on the night of 5 February, 1994, he twitched the hangings of his four-poster shut to block out a ray of moonlight.[9]

In the early evening of 6 June, 1994, thick clouds covered the moon, although later that night when Ron Weasley, Harry Potter, Hermione Granger, Sirius Black, Professor Lupin and Peter Pettigrew left the Shrieking Shack through the entrance at the base of the Whomping Willow, the clouds moved aside to reveal a full moon, and Lupin, who was a werewolf, transformed.[10]

On the evening of 30 October, 1994, as the students of Hogwarts greeted the delegations from Beauxbatons and Durmstrang, a pale, transparent-looking moon shone down over the Forbidden Forest.[11]

In early 1995, as Harry Potter travelled to the Prefects' bathroom to work out the golden egg clue, the corridors of Hogwarts were moon-lit.[12] In February of that year, as he searched more and more desperately for a way to survive for up to an hour in the Great Lake, its "dark and icy depths" started to seem to him "as distant as the moon."[13]

During the summer holidays of 1995, The Quibbler published an interview with a wizard who claimed to have flown to the moon on a Cleansweep Six and brought back a bag of Moon Frogs to prove it.[14]

In April 1997, on the night that Rubeus Hagrid buried Aragog, the moon glistened palely through the trees and illuminated Aragog's body.[15]

In June of that year, the moon was crescent on the night of the Death Eater attack on Hogwarts.[16]

Sometime prior to 27 July of that year, on the night of Charity Burbage's murder, the moon was out and shown down upon Severus Snape and Yaxley as they paid a visit to Lord Voldemort at Malfoy Manor.[17]

In December of that year, a ghostly moon hung behind the Lovegood house in the afternoon sky as Harry, Ron and Hermione visited it.[18]

Retrieved from "https://harrypotter.fandom.com/wiki/Moon?oldid=1275332"
Community content is available under CC-BY-SA unless otherwise noted.