Extant
The Mooncalf was a shy magical beast that only came out of its burrow during a full moon.[1]

The Mooncalf had smooth, pale grey skin, and four spindly legs that ended in large flat webbed feet. The Mooncalf also had a very long neck and bulging blue eyes that sat on the top of its head.[1]

Once the Mooncalf was in the moonlight, it performed complicated dance moves while standing on its hind legs. It was believed that this is part of the Mooncalf mating ritual, but also had the side effect of creating geometric patterns in wheat fields that confused Muggles.[1]

Mooncalf dung, if harvested before the sun rose, would make magical plants grow fast and strong.[1]

Newt Scamander had a herd of Mooncalves in his suitcase during his visit to New York in 1926.[3] He also kept another small group in the basement of his apartment.[4] However, it is possible that these were part of the same herd.

In modern terminology, a "mooncalf" is a foolish person. The term originally meant a deformed calf born under the malign influence of the full moon. In the 17th century, it came to mean a deformed baby, and later, a hideously deformed individual; as in Shakespeare's Tempest, when Stephano calls Caliban a "mooncalf."

A Mooncalf as seen in LEGO Harry Potter: Years 5-7 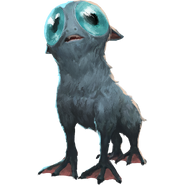 A baby Mooncalf as seen in Harry Potter: Wizards Unite

A Mooncalf as seen in Harry Potter: Wizards Unite

A Mooncalf POP! Vinyl
Add a photo to this gallery

The Harry Potter Wiki has 13 images related to Mooncalf.

Retrieved from "https://harrypotter.fandom.com/wiki/Mooncalf?oldid=1384947"
*Disclosure: Some of the links above are affiliate links, meaning, at no additional cost to you, Fandom will earn a commission if you click through and make a purchase. Community content is available under CC-BY-SA unless otherwise noted.