"Long-snouted, burrowing creatures native to Britain with a penchant for anything shiny."
— Description of a Niffler[src]

The Niffler was a magical beast with a long snout and a coat of black, fluffy fur.[1] They were attracted to shiny things, which made them wonderful for locating treasure, but that also meant that they could wreak havoc if kept (or let loose) indoors.[1] Nifflers in general were usually harmless.[1]

Students at Hogwarts School of Witchcraft and Wizardry learnt about Nifflers in Care of Magical Creatures class,[3][4] an elective that could be chosen in the third year of their education.

Nifflers were assigned to Curse-Breakers by the Gringotts Head Goblin to burrow underground in search of treasures hidden in cursed sites.[1]

Nifflers were rodent-like creatures with a long snout similar to that of a platypus and a coat of black, fluffy fur.[1] Native to Britain, they lived in burrows as deep as twenty feet below ground, and females produced six to eight young in a single litter.[1]

Nifflers had a pouch on their bellies which held far more than at first seemed possible, like the effects of an Undetectable Extension Charm on a container.[5]

Nifflers were gentle by nature and could even be affectionate towards their owners.[1] However, they could destroy belongings looking for sparkly objects, and for that reason it was inadvisable to keep them as a house pet.[1] It was also implied that they could turn vicious if provoked, as the second Niffler released into Dolores Umbridge's office apparently tried to take a chunk out of her leg.[6]

Nifflers were kept by Goblins to burrow for treasure.[1]

Newt Scamander owned a Niffler named Teddy, who escaped twice from his suitcase during his visit to New York in 1926 and tried to rob both the Steen National Bank and a jewel shop of numerous valuables.[7] In 1927, the same Niffler produced four offspring each in a different colour.[8] This same exact Niffler snuck out of Newt's case at Grindelwald's rally and took the blood pact.

Patricia Rakepick kept a Niffler named Sickleworth that she used on her Curse-Breaking assignments for Gringotts. Her Niffler was known to be very well behaved.[4] Jacob's sibling borrowed it to help with finding the Forest Vault in the Forbidden Forest.[9]

Silvanus Kettleburn was known to keep twelve of them, even when they had wrecked his house, boat and his favourite prosthetic leg.[4] Kettleburn taught his fourth-year students during the 1987–1988 school year at Hogwarts about how to handle Nifflers, with Patricia Rakepick lending her pet Niffler Sickleworth for one lesson.[4]

Jacob's sibling may have also kept one in the Magical Creatures Reserve.[10]

Merula Snyde used the Engorgement Charm to enlarge one to gigantic size, increasing its potential damage, during an incident where a large number of magical creatures escaped containment, in an attempt to get Hagrid, Jacob's sibling and their friends in trouble. Jacob's sibling defeated Merula in a duel, disabling her long enough to return the creature back to its original size.[11]

"These're nifflers. Yeh find 'em down mines mostly. They like sparkly stuff.... There yeh go, look. Useful little treasure detectors. Thought we'd have some fun with 'em today. See over there? I've buried some gold coins. I've got a prize fer whoever picks the niffler that digs up most. Jus' take off all yer valuables, an' choose a niffler, an' get ready ter set 'em loose."
— Rubeus Hagrid to his fourth year Care of Magical Creatures students[src]

During the 1994–1995 school year, Rubeus Hagrid used them as part of the fourth year's Care of Magical Creatures class. Prior to class he hid Leprechaun gold in the earth in front of his hut. He paired each student with a Niffler and promised a prize to whoever found the most gold. Before the lesson started, a Niffler leapt up Pansy Parkinson and tried to bite her watch off her wrist, to which she shrieked and jumped backward. Ron Weasley asked Rubeus Hagrid if they could buy these Nifflers as pets, and with knowledge, Hagrid said his mum wouldn't want one because they wreck houses, but this was not a definitive "no". This means there is a very good chance that wizards could purchase Nifflers. When Hagrid caught Gregory Goyle pocketing the gold, he explained that trying to steal it was pointless, as Leprechaun gold was worthless because it disappeared after a few hours. Ron's Niffler found the most gold, so Hagrid rewarded him with an extremely large slab of chocolate from Honeydukes.[3]

During Dolores Umbridge's tenure as Headmistress of Hogwarts School of Witchcraft and Wizardry, Lee Jordan used the Levitation Charm to levitate Nifflers through her office window to wreck the office.[6] One tore her office apart searching for shiny objects and tried to gnaw the rings off her stubby fingers,[2] with a later one trying to take a chunk out of her leg.[6] Umbridge blamed Hagrid for it, and that did not help him in the least during her Hogwarts High Inquisitor inspections.[2]

Nifflers were among the threats to the Statute of Secrecy that the International Confederation of Wizards had to deal with in the 2010s, as they manifested as Foundables.[12]

The Harry Potter Wiki has 73 images related to Niffler. 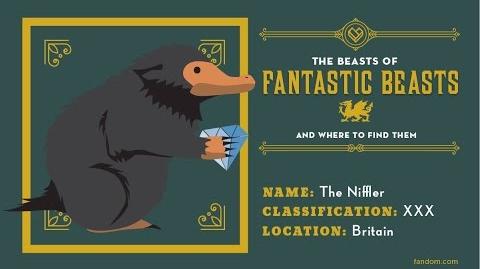 What is a Niffler?

Deutsch Ελληνικά Español Français 日本語 Norsk Polski Português do Brasil Русский Svenska Українська
*Disclosure: Some of the links above are affiliate links, meaning, at no additional cost to you, Fandom will earn a commission if you click through and make a purchase. Community content is available under CC-BY-SA unless otherwise noted.
Advertisement