Harry Potter Wiki
Register
Don't have an account?
Sign In
Advertisement
in: Articles with dead links, Care of Magical Creatures, Creatures from India,
and 5 more
English

"The Occamy is found in the Far East and India. A plumed, two-legged winged creature with a serpentine body, the Occamy may reach a length of fifteen feet. It feeds mainly on rats and birds, though has been known to carry off monkeys. The Occamy is aggressive to all who approach it, particularly in defence of its eggs, whose shells are made of the purest, softest silver."
— Newt Scamander, Fantastic Beasts and Where to Find Them[src]

The Occamy was a winged, serpentine magical beast native to the Far East and India.[1]

It was a plumed, two-legged serpentine-bodied creature with wings that reached up to fifteen feet in height. The Occamy was extremely aggressive to anyone who approached it, and lived off of insects, rats, birds, and occasionally monkeys. It was extremely protective of its eggs, which were made of the most pure and soft silver. It was found in the Far East and India.[1]

The Occamy was known to be choranaptyxic, meaning it grew or shrank in order to fit available space.[2]

It was a known possible but rare corporeal form of the Patronus Charm.[3]

Newton Scamander had several Occamies in his suitcase during his visit to New York in 1926. One of them escaped, along with various other creatures, and had to be eventually tracked down and captured in the storeroom of Ginzberg Delaunay, a New York department store.[4]

At some point during his teaching career, the Care of Magical Creatures Professor Silvanus Kettleburn brought an Occamy to Hogwarts School of Witchcraft and Wizardry.[5] During the 1986–1987 school year, Kettleburn asked Jacob's sibling and Liz Tuttle to care for his baby Occamy Squawk while he was away, which might have been this Occamy.[6]

During the 1990–1991 school year at Hogwarts, Professor Kettleburn taught seventh-year students about how the handling of Occamies in Care of Magical Creatures.[7]

It was once Gilderoy Lockhart's ambition to create a line of haircare products, as he was very proud of his naturally bouncy and wavy hair. He wanted to mass produce the products with his secret ingredient: Occamy egg, as the main ingredient for Occamy egg yolk shampoo.[8] As Occamies were very territorial, it proved to be too dangerous and too expensive to supply. It is unknown if Lockhart, a long-term resident of St Mungo's, recalled this failed aspiration.

By at least the 2010s, a Calamity Investigator working for the Statute of Secrecy Task Force studied the habits and environment of Occamys and Mokes in order to determine the potential similarity between their shrinking abilities.[9]

The word "Occamy" is derived from the name of the English philosopher Occam, who invented the methodological principle "Occam's Razor", which asserts that when evaluating two competing explanations for a situation one should accept the one that requires least assumptions to be made (or, in other words, nothing should be presumed to exist that is not absolutely necessary for explanation).

As such, the naming of this creature as an "Occamy" is a joke on the part of J. K. Rowling, since the existence of the Occamy itself (and just about every other creature described in Fantastic Beasts and Where to Find Them) has no reason to exist and came into being solely for the sake of fleshing out the aforementioned book.[10] 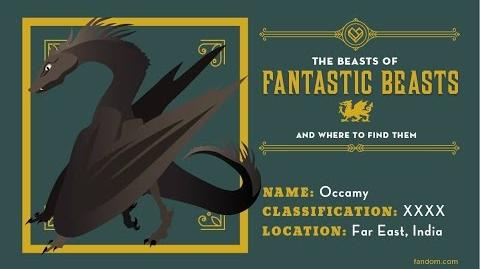 The Harry Potter Wiki has 24 images related to Occamy.

Deutsch Español Français Italiano Nederlands Polski Português do Brasil Русский 中文
*Disclosure: Some of the links above are affiliate links, meaning, at no additional cost to you, Fandom will earn a commission if you click through and make a purchase. Community content is available under CC-BY-SA unless otherwise noted.
Advertisement