This article is about the skill of protecting one's mind from external penetration. You may be looking for the private lessons given to Harry Potter.

"The magical defence of the mind against external penetration. An obscure branch of magic, but a highly useful one."
— A basic description of Occlumency[src]

Occlumency was the magic of closing one's mind against Legilimency. It was ancient, and had existed since medieval times.[1] It could prevent a Legilimens from accessing one's thoughts and feelings, or influencing them. A wizard or witch who practised this art was known as an Occlumens.[2]

"I told you to empty yourself of emotion! ... Fools who wear their hearts proudly on their sleeves, who cannot control their emotions, who wallow in sad memories and allow themselves to be provoked this easily — weak people, in other words — they stand no chance against his powers! He will penetrate your mind with absurd ease, Potter!"
— Severus Snape on the difficulty of learning Occlumency[src]

The most basic form of Occlumency, judging from Severus Snape's early lessons on the subject to Harry Potter, involved clearing one's mind — making it "blank and empty" — in order to prevent a Legilimens from perceiving one's emotions and thoughts. More advanced Occlumency involved suppressing only the thoughts, emotions, and memories that would contradict whatever it was an Occlumens wished a Legilimens to believe.

This produced a "faux" layer of mentality that could totally throw off the perspective of one who used Legilimency into thinking that the said layer being the legitimate one whilst its bona fide counterpart lay deeper within. Hence, it was not obvious that Occlumency was being used even if the person was lying. It required a great deal of willpower, as with resisting the Imperius Curse, as well as a high degree of mental and emotional discipline. It was also one method of resisting the influence of Veritaserum.[2]

Considered to be an obscure branch of magic despite its usefulness, Occlumency was not part of the normal curriculum taught at Hogwarts School of Witchcraft and Wizardry and appeared to be a rare and difficult skill.[2]

"I am about to attempt to break into your mind. We are going to see how well you resist. I have been told that you have already shown aptitude at resisting the Imperius Curse.... You will find that similar powers are needed for this.... Brace yourself, now.... Legilimens!"
— Snape teaching Harry Potter Occlumency[src]

Gellert Grindelwald was a very accomplished Occlumens, as he was able to conceal his true mind from even natural-born Legilimens Queenie Goldstein, which worked in tandem with his acting skills and at the time disguising as Percival Graves.[3] Even in advanced age and long-time imprisonment, Grindelwald remained a powerful practitioner as Voldemort failed to penetrate his mind.[4]

Bartemius Crouch Junior was an accomplished Occlumens, as he managed to hide his true mind from Albus Dumbledore and Severus Snape, both accomplished Legilimens, while disguised as Alastor Moody. Had Barty not been groggy when stunned later that year, he would have had the prowess in Occlumency to resist the Veritaserum.[5][6]

In the 1995–1996 school year, Albus Dumbledore had Severus Snape teach Harry Potter Occlumency in an effort to prevent his mind from being penetrated and influenced by Lord Voldemort. Snape was a highly skilled Occlumens, being able to successfully deceive extremely accomplished Legilimens Voldemort, but his lessons with Harry were ultimately unsuccessful. Harry was not able to repel most attacks, though it is likely that the personal enmity between him and Snape as well as the stressful events in his life that year hindered his ability; while Snape was not teaching in an encouraging way, Harry's climbing interests in Voldemort's repeated attempts at the Hall of Prophecy made him further neglect his practice of the skill.[2][7][8] He eventually gave up attempting to learn.[9] Harry later managed to block his connection to Voldemort, on occasion, by focusing on feelings of love and grief, rather than by using Occlumency.[10]

Snape himself also employed Occlumency to hide his loyalty to the Order of the Phoenix from Voldemort, and due to his well-known mastery, both sides had difficulty trusting him.[2]

Albus Dumbledore was also an exceptional Occlumens, having been one of the few to be capable of repelling Voldemort's Legilimency and he also expressed confidence in his ability to teach Harry the art but chose not to due to fearing Voldemort's reaction to how close they were.[2]

After the Battle of the Department of Mysteries, Voldemort realised the dangers of his connection with Harry, and employed Occlumency to seal off the link, thus freeing Harry from feeling any pain from his lightning-bolt scar and also dreams of what Voldemort was doing.[10] However, by 1997 to 1998, Voldemort started losing control due to repeated failures of his Death Eaters infuriating him more and more, and the reported losses of his Horcruxes became a tipping point where he forgot to close his mind, allowing the thoughts to be seen by Harry as he mentally organised his Horcrux hiding locations.[11]

In 1996, Bellatrix Lestrange trained her nephew, Draco Malfoy in Occlumency so that he could keep his mission to kill Albus Dumbledore a secret. Draco became skilled enough to repel Snape's attempts at Legilimency.[12] Draco's success was due to him shutting out his compassion to become the bully he is, making it easy for him to close his mind.[13] Despite this, Dumbledore did not confront Draco earlier regarding the assassination attempts due to fearing Voldemort would use Legilimency on Draco to discover it, suggesting that Voldemort's Legilimency is able to overpower Draco's Occlumency.

Horace Slughorn was noted for his skills in Occlumency, more accomplished than Morfin Gaunt, and he would be able to resist the likes of Dumbledore, hence a reason Dumbledore refused to use force or coercion to wrest a memory out of Slughorn. His mastery would also allow him to resist the effects of Veritaserum, though he would nevertheless carry an antidote, which for all accounts, makes it redundant.[14]

In the early 2020s, Hermione Granger decided to start studying Occlumency from a book, as she suspected that the head of The Unforgivable was a Legilimens, in order to protect her mind from them.[15] It is unknown if she mastered the skill. 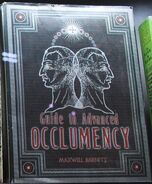 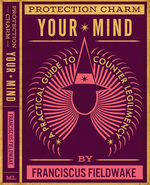 Protection Charm Your Mind: A Practical Guide to Counter Legilimensy by Franciscus Fieldwake

The word "occlumency" comes from the Latin occludere, meaning "to shut up" and mens, for "mind".

In Czech, Occlumency is named "Nitroobrana". It comes from Czech "nitro" meaning heart and soul inside human and "obrana" which means defence.[citation needed]

Deutsch Español Eesti Suomi Français Italiano Polski Português do Brasil Русский
*Disclosure: Some of the links above are affiliate links, meaning, at no additional cost to you, Fandom will earn a commission if you click through and make a purchase. Community content is available under CC-BY-SA unless otherwise noted.
Advertisement