"I 'ave nevair been more insulted in my life! 'Alf-giant? Moi? I 'ave — I 'ave big bones!"
—Maxime's embarrassment over her half-giant heritage[src]

Madame Olympe Maxime was a French half-giant witch and was the headmistress of Beauxbatons Academy of Magic. Maxime's preferred mode of transportation was to travel with her students in a powder-blue carriage drawn by twelve winged Abraxan horses, which were bred at Beauxbatons Academy.[3][7] Madame Maxime was a half-giantess, although she claimed merely to have "big bones."[1] This was a necessity, however, as the approach to giants (or part-giants) was generally hostile in the wizarding world.[8]

Olympe Maxime was born to one magical parent and one giant, making her a half-giantess. She kept this heritage hidden, out of fear of the prejudice that would strike her were it to be revealed.[1] She was likely educated at Beauxbatons in France, where she later became Headmistress.[3] It is unknown exactly when she became Headmistress of Beauxbatons.

In the 1985–1986 school year, she visited Hogwarts School of Witchcraft and Wizardry along with Beauxbatons student Aurélie Dumont. At Hogwarts, she met Penny Haywood and Jacob's sibling.[9]

Maxime: "My steeds require — er — forceful ’andling. Zey are very strong...."
Dumbledore: "I assure you that Hagrid will be well up to the job."
Maxime: "Very well. Will you please inform zis ’Agrid zat ze ’orses drink only single-malt whiskey?"
— Dumbledore and Maxime discussing the caring of her Abraxan horses at Hogwarts[src]

In August 1994, Madame Maxime attended the final of the 422nd Quidditch World Cup in England with some of her students.[10] When the Dark Mark was conjured by Barty Crouch Jnr, they got separated. While trying to find her, her students asked Ronald Weasley if he had seen her. Ron, who did not speak any French, did not understand the question and was therefore unable to help them.[11]

Maxime and some of her students went to Hogwarts School of Witchcraft and Wizardry in October of 1994 for the Triwizard Tournament.[3] She made such an impact on Professor Rubeus Hagrid that he immediately started trying to impress her. Since he was another half-giant like her, he thought she would understand his feelings. He tried to tame his hair, wore his best ill-fitting clothes, and even showed her the Triwizard Tournament dragons while they were still meant to be a secret.[12] Given his lack of social graces, however, this was not so successful. It is unclear whether she was impressed by this, but either way, Hagrid scuppered any chance he might have had at the Yule Ball. It was here that he put it to Olympe that she was a half-giant just like him — he was right, of course, but she was not inclined to concede such a point.[1] Because of this line of questioning she avoided his company. However, Harry noticed that she did attempt to re-initiate contact with Hagrid, while he dug in his garden. Apparently Hagrid did not warmly greet her and she left soon after.[8] However the two reconciled eventually.[13]

When Harry returned clutching the body of Cedric Diggory, Olympe was one of the first to realise that he was dead and clutched her heart in shock,[14] after he had been murdered by Peter Pettigrew in the Little Hangleton graveyard on Voldemort's orders, after him and Harry were transported there via the Triwizard Cup (which had been turned into a Portkey). She was also present during the memorial feast of Cedric Diggory after the end of the Tournament. Afterwards, she and her students returned to France to Beauxtbatons.[13]

During the summer of 1995 Rubeus Hagrid and Madame Maxime visited the giants as envoys for Albus Dumbledore. Hagrid described her spellwork as "brilliant". She separated from Hagrid during the return journey, however, because he would not abandon his half-brother Grawp, who proved to be a highly taxing travelling companion; she returned to Beauxbatons alone.[2]

In 1997, Madame Maxime was among those paying respects at Dumbledore's funeral. She and Hagrid comforted each other during this occasion, though this may have been inspired solely by the emotion of the moment.[7] She also attended the wedding of Bill Weasley and former Beauxbatons student Fleur Delacour later on that same year.[15]

It is unknown if she and Hagrid ever rekindled their relationship, although ultimately they never married.[16]

During the Calamity, Madame Maxime was known for helping members of the Statute of Secrecy Task Force who took a short sabbatical to Beauxbatons to study her transformative duelling style to increase the amount of damage they can inflict. She also appeared as a Foundable alongside Hagrid as they appeared together at the Yule Ball, being pelted by snowballs from a Pixie Confoundable. The Foundable of her and Hagrid could be overpowered and released with the Knockback Jinx.[17]

"I don't know who Maxime thinks she's kidding, If Hagrid's half-giant, she definitely is. Big bones... the only thing that's got bigger bones than her is a dinosaur."
—Harry Potter regarding Madam Maxime[src]

Madam Maxime was described to be a beautiful woman: an olive-skinned face with a beak-like nose and large, black, liquid-looking eyes. Her hair was drawn back in a shining knob at the base of her neck. She dressed from head to foot in black satin, and also wore opal jewellery.[3] Despite her size, she was elegant and graceful, and Dumbledore once stated that she was a wonderful dancer.[8]

Maxime's huge size was due to her half-giant background. Initially, she fiercely denied this, claiming that she merely had "big bones".[1] Harry noted he "had only ever seen one person as large as this woman in his life, and that was Hagrid; he doubted whether there was an inch difference in their heights".[3]

Madam Maxime appeared to have a good relationship with her students.[11][3] She was also shown to have a sense of fair play: she felt it was unjust that Harry Potter had also been chosen for the Triwizard Tournament (which gave Hogwarts two champions), and at first she refused to believe that Harry had not actually put his name in the Goblet of Fire.[18] However, she did not judge Harry unfairly during the Triwizard Tournament's tasks, giving him an 8 out of 10 (though slightly lower than most of the others', it was far fairer than Karkaroff's four) in the first task.[6] Later on, she willingly gave Harry full marks in the second task for moral fibre, despite Karkaroff only awarding him half marks,[19] showing she was a very impartial and reasonable judge of character.

"Yeh know, she’s a fine, well-dressed woman, an’ knowin’ where we was goin’ I wondered ’ow she’d feel abou’ clamberin’ over boulders an’ sleepin’ in caves an’ tha’, bu’ she never complained once."
—Hagrid describing Maxime's strong-willed personality[src]

However, Olympe was ashamed of being a half-giant, and claimed that she was simply "big-boned".[1] Though Hagrid described her as a fine, well-dressed woman, Maxime did not complain once about having to climb over boulders or sleep in caves during her and Hagrid's mission to visit the giants, which in turn implies that - despite her denial of her heritage - she was still a realistic woman who knew how to accept her circumstances for what they were. She also had a fiery temper and Hagrid had to restrain her from attacking two Death Eaters during the mission, leading him to speculate that this may be due to the French in her.[2]

As the Headmistress of a prominent European Wizarding school, Madame Olympe Maxime was a highly competent and accomplished witch deserving of the title bestowed upon her.

"Wouldn’ta done if Olympe hadn’ bin there. She pulled out her wand an’ did some o’ the fastes’ spellwork I’ve ever seen. Ruddy marvellous. Hit the two holdin’ me right in the eyes with Conjunctivitus Curses an’ they dropped me straightaway —"
—Madame Maxime's talent for combative spell-casting[src]

During the Triwizard Tournament, Hagrid began a romantic relationship with Madame Olympe Maxime, Headmistress of Beauxbatons Academy. They were often seen together, talking and walking around the grounds, and they danced together at the Yule Ball.[1] Though the two had a minor falling-out when Hagrid implied (correctly) that Maxime, like him, was part giant,[1] they eventually reconciled and travelled together to appeal to the giants of the Northern colonies and dissuade them from joining forces with Voldemort.[2] Maxime was also seen comforting Hagrid during Albus Dumbledore's funeral.[7] The current status of their relationship is unknown, but as Hagrid never got married, it can be assumed that their relationship did not work out.[16] However, they likely remained good friends.

Dumbledore: "My dear Madame Maxime. Welcome to Hogwarts."
Maxime: "Dumbly-dorr. I ’ope I find you well?"
Dumbledore: "In excellent form, I thank you"
— Dumbledore and Maxime warmly greeting each other in 1994[src]

At the outset of the Triwizard Tournament, Madame Maxime was cordial and friendly with Albus Dumbledore. Referring to him as "Dumbly-dorr",[3] Maxime and Dumbledore later danced at the Yule Ball.[1] After meeting with Dumbledore, she agreed to help with his request to journey to the giant colonies[13] and ultimately attended his funeral.[7]

Olympe is the French word for Olympus, the mountain home of the Greek gods. Maxime is French for "principle" (or "maxim"), a pun on "principal". It is derived from the Latin maxima, the feminine form of "maximus", meaning "greatest" or "biggest".

Maxime as she appears on Pottermore

Olympe Maxime as she appears in LEGO Harry Potter: Years 1-4

Olympe Maxime as a LEGO mini-figure 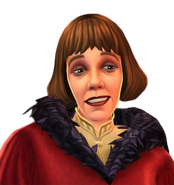 Olympe Maxime as she appears in Harry Potter: Hogwarts Mystery
Add a photo to this gallery

The Harry Potter Wiki has 43 images related to Olympe Maxime.

Retrieved from "https://harrypotter.fandom.com/wiki/Olympe_Maxime?oldid=1396729"
*Disclosure: Some of the links above are affiliate links, meaning, at no additional cost to you, Fandom will earn a commission if you click through and make a purchase. Community content is available under CC-BY-SA unless otherwise noted.