Peacock is the name given to the male of two related species of peafowl, birds known for their large fan-like tails decorated with multiple eye-like spots.[1]

A peacock is one possible corporeal form of the Patronus Charm.[2]

Gilderoy Lockhart owned a peacock feather quill that he normally used for book signings, but made an exception for Hermione Granger's request to check Moste Potent Potions out of the Restricted Section of the Hogwarts library (though no one was sure if he even noticed the title of the book as he was signing).[4]

One of the tents at the 1994 Quidditch World Cup had several live peacocks tethered outside of it.[5]

In 1995, when Gilderoy Lockhart was in St Mungo's Hospital for Magical Maladies and Injuries (still recovering from the botched Memory Charm he attempted to use on Ron Weasley and Harry Potter three years earlier), he still had his peacock feather quill in his possession, though it had acquired a battered look.[6]

Lucius Malfoy owned at least one peacock with albinism, which lived in his garden at Malfoy Manor. Yaxley and Severus Snape noticed the peacock while they were heading to a meeting at Malfoy manor.[7] 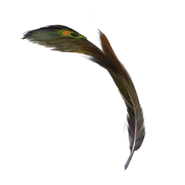 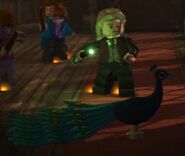 Lucius Malfoy with his peacock in LEGO Harry Potter: Years 5-7

Peacock patronus
Add a photo to this gallery

Retrieved from "https://harrypotter.fandom.com/wiki/Peacock?oldid=1357760"
*Disclosure: Some of the links above are affiliate links, meaning, at no additional cost to you, Fandom will earn a commission if you click through and make a purchase. Community content is available under CC-BY-SA unless otherwise noted.