"Pepper-Up Potion can be used to cure colds and to warm the recipient up. Drinking it can cause steam to come out of the drinker's ears. The potion was invented by Glover Hipworth."
— Description[src]

The Pepperup Potion (or Pepper-Up Potion) was a potion which cured the common cold and warmed up the recipient.[1][6] It had the side-effect of causing steam to emit from the drinker's ears for hours on end afterward.[2][3]

In the 12th century, potioneer Linfred of Stinchcombe developed a rudimentary treatment for the common cold that would later serve as the basis for the Pepperup Potion.[2] Centuries later, sometime between the mid-18th to early 19th century, Glover Hipworth built on Linfred's previous work, and perfected the Pepperup Potion.[6] 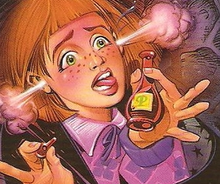 During the 1987–1988 school year at Hogwarts School of Witchcraft and Wizardry, Professor Severus Snape taught his fourth-years how to concoct this particular brew in Potions class, due in part to his suffering from a common cold.[4]

Penny Haywood brewed an altered version of this potion to help an ailing dragon breathe fire, in order to heal a female Chinese Fireball for Rubeus Hagrid.[7]

During the winter of the 1992–1993 school year, a spate of colds ran through the student body of Hogwarts School of Witchcraft and Wizardry, and Madam Pomfrey used Pepperup Potion to relieve their symptoms. Ginny Weasley was bullied into taking some by Percy Weasley during this time, although her illness was more to do with her possession by Tom Riddle's Diary than a cold.[1]

On 24 February 1995, it was also used after the second task of the Triwizard Tournament on the hostages and champions after they emerged from the Great Lake.[8]

On 24 June of that same year, Bartemius Crouch Junior, posing as Alastor Moody, gave Harry Potter a potion described as having a peppery taste following the third task of the Triwizard Tournament and the return of Lord Voldemort, which may have been the Pepperup Potion, or something very similar to it. After doing so, the fake Moody's office came into sharper focus for Harry and his head cleared.[9]

During the 2008–2009 school year, when Ivy Warrington and Robyn Thistlethwaite caught the flu, Daniel Page secretly brew Pepperup Potion for them in a bathroom. This was discovered by a friend of his.[10]

Deutsch Deutsch Español Français Italiano Polski Русский
*Disclosure: Some of the links above are affiliate links, meaning, at no additional cost to you, Fandom will earn a commission if you click through and make a purchase. Community content is available under CC-BY-SA unless otherwise noted.
Advertisement