Percival Graves[6] was an Auror, Director of Magical Security and head of MACUSA's Department of Magical Law Enforcement.

At some point prior to 6 December 1926, his identity was assumed by Gellert Grindelwald using Human Transfiguration.[7] It is unknown if he was killed or kept in captivity during this time.

When Gellert Grindelwald Transfigured himself into Percival in December 1926, he was described as an early middle-aged, good-looking man wearing elegant clothes.[8]

As the Director of Magical Security, Percival Graves was likely highly professional and determined.

Graves was a highly skilled wizard, and formerly one of the most distinguished members of the Investigative Team. While Grindelwald was impersonating Graves, he did not arouse any suspicion when effectively performing feats of immense magical power, a testament to Graves's exceptional power and skill. 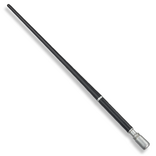 Retrieved from "https://harrypotter.fandom.com/wiki/Percival_Graves?oldid=1156862"
*Disclosure: Some of the links above are affiliate links, meaning, at no additional cost to you, Fandom will earn a commission if you click through and make a purchase. Community content is available under CC-BY-SA unless otherwise noted.