Newt Scamander
Pickett was a male Bowtruckle that was kept by Newt Scamander as a pet. Although he had at least six Bowtruckles[3] (Pickett, Titus, Finn, Poppy, Marlow, and Tom),[2] Newt was especially fond of Pickett, and even carried him around in his top pocket,[4] first because Pickett occasionally had colds and needed body warmth, and also because Pickett had attachment issues.[3]

In 1926, Pickett accompanied Newt on his journey to New York, sitting inside his top pocket. He was present when the Niffler escaped at the Steen National Bank and when Newt was taken to the Magical Congress of the United States of America by Tina Goldstein.

Pickett was still hidden in Newt's pocket when Gellert Grindelwald, in the guise of Percival Graves, wrongfully sentenced them to death.[5] As bowtruckles are able to pick locks, Pickett was able to release Newt from his shackles and help Newt and Tina escape from the Death Cell.[6]

Later, when Newt met the goblin gangster Gnarlak, Newt agreed to give Pickett to him as part of a deal to obtain information about the last missing beasts. Gnarlak betrayed them and turned them in to MACUSA. In the resulting fray, Jacob punched Gnarlak out so Newt was able to rescue Pickett and escape.[7] Pickett was not pleased with Newt for giving him away and expressed it by sulking and blowing raspberries at him.[8]

In 1927 Pickett was present while Newt was waiting for an interrogation at the British Ministry of Magic regarding his international travel ban.[9]

Pickett also accompanied Newt on his journey to Paris. When Newt and Jacob Kowalski found Tina imprisoned by Yusuf Kama in his hideout in the Paris' sewers, they were also imprisoned by him. When Yusuf fainted, due to a water dragon parasite in his eye, Pickett opened the lock in the gate and helped get them out of the room.[9]

Pickett then snuck out of Newt's pocket and caused Leta to find Newt and Tina at the French Ministry of Magic Records Room. 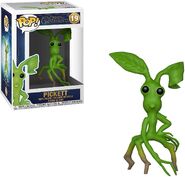 Pickett as a POP! Vinyl