"Platform nine and three-quarters is the train platform from which students board the Hogwarts Express, the scarlet steam engine that brings students to and from Hogwarts. It can be accessed by walking straight through the apparently solid barrier between platforms nine and ten."
— Description of the platform's purpose and the means of entry[src]

Platform Nine and Three-Quarters (Platform 9¾) was a platform at King's Cross Station in London. Magically concealed behind the barrier between Muggle Platforms Nine and Ten, this Platform was where Hogwarts School of Witchcraft and Wizardry students boarded the Hogwarts Express every 1 September, in order to attend school.[1]

"Harry had caught the Hogwarts Express the previous year. The tricky part was getting onto platform nine and three-quarters, which wasn’t visible to the Muggle eye. What you had to do was walk through the solid barrier dividing platforms nine and ten. It didn’t hurt, but it had to be done carefully so that none of the Muggles noticed you vanishing."
— Harry Potter explaining how to enter the platform[src]

In northwestern London lay King's Cross Station, a Muggle railway station that was one of the busiest in the city. It was a perfectly ordinary station, with big plastic numbers over each track and guards who had never heard of the Hogwarts School.[1] However, every 1 September, as the clock overhead approached eleven o'clock,[3] and the InterCity 125 pulled into platform nine,[4] a strange crowd turned the occasional Muggle head. The crowd was wizarding children, bearing enormous trunks and caged owls and other unusual pets, making their way toward — and then through — the solid metal barrier between platforms nine and ten.[5]

Through this barrier, of course, lay Platform Nine and Three-Quarters, home of the famous Hogwarts Express. There, a look back at the barrier revealed it was instead a wrought-iron archway with the words "Platform Nine and Three-Quarters" on it. Over the scarlet steam train's billowing smoke, there was a sign announcing that the Hogwarts Express would depart at eleven o'clock.[1] The platform also had a distinct smell — one which lifted the spirits of young wizards who, like Harry Potter, look forward each summer to the start of term.[5]

Though the platform was normally only used six days a year (round trips for the beginning and end of term, as well as the Christmas and Easter holidays), the platform on those days was awash with activity. Steam from the scarlet engine flooded the platform as cats wound their way around the wizards' legs and owls hooted to each other,[1] as hoardes of students and parents moved around through the steam "like dark ghosts",[6] their voices carrying through the mist.[7]

Finally, at 11:00, a whistle sounded announcing the train's departure,[1] and the hiss of the pistons filled the platform as the train began to move,[6] creaking out of the station as family members stood on the platform and waved their children off to school.[5] Nobody returned to the platform, then, for months — until the end of term, when it once again filled with wizards and a wizened old guard sat by the archway back to the Muggle world, making sure everyone got home without attracting too much attention.[2]

The brainchild of Minister Evangeline Orpington in the 1850s, Platform Nine and Three-Quarters was the first of the concealed wizarding platforms at King's Cross.[8]

After the Ministry of Magic had acquired the Hogwarts Express, under Minister Ottaline Gambol in 1830[9], they also built a railway station at Hogsmeade, as a necessary adjunct to the train.[10] The Ministry, however, refrained from building a station in the middle of London, as that would stretch even the Muggles' notorious determination not to notice magic even when it was exploding in front of their faces. It was only after Minister Orpington was appointed to the office (1849-1855) that a solution was reached: a concealed platform would be added to the newly Muggle-built King's Cross Station, accessible only to witches and wizards.[8] There is no information on how exactly Hogwarts students were travelling during the period after the acquisition of the Hogwarts Express and the creation of the Hogsmeade station and before the creation of Platform 9¾ in the 1850s.

While the solution proved a good one, there were always some minor issues, such as witches and wizards dropping suitcases full of biting spellbooks or newt spleens all over the polished station floor, or disappearing through the solid barrier a little too loudly. To prevent any serious breaches of the International Statute of Wizarding Secrecy, there is usually a number of plain-clothed Ministry of Magic employees on hand at the station, to deal with any inconvenient Muggle memories that may need altering.[8]

On 1 September 1971, Eileen Snape took her eleven-year-old son, Severus Snape, to board the Hogwarts Express via this Platform. Muggles Mr and Mrs Evans also took their witch daughter, Lily Evans, there along with her Muggle sister, Petunia. While the parents looked around the platform with an air of wholehearted enjoyment, the two sisters argued and Petunia ended up calling her sister a freak.[11]

"Don't talk rubbish. There is no platform nine and three-quarters."
— Muggle Vernon Dursley's disbelief at the platform[src]

Harry Potter first used Platform 9¾ on 1 September 1991. Not knowing how to get into it, and recognising the Weasley family as a family of wizards, he asked Molly Weasley how to access it. As Harry crossed the Platform, he passed by a round-faced boy telling his grandmother he had lost his toad, and a boy with dreadlocks showing a tarantula to his peers.[1]

On 1 September 1992, Dobby the House-elf blocked the magical barrier dividing Platforms Nine and Ten in order to prevent Harry Potter and Ron Weasley from attending school. Consequently, they decided the only way to get to Hogwarts was to steal Arthur Weasley's Flying Ford Anglia and fly it to the school.[3] When the school year ended, the students returned to the Muggle world via the magical gateway in the platform.[12]

In 1993, the Weasleys took Harry to the Platform again. Arthur Weasley hoped to talk to Harry about Sirius Black, but Harry had already overheard Arthur talking about it to his wife.[4] Once the school year ended, Harry and his classmates returned to the Platform, where he told Vernon Dursley about his godfather, "a convicted murderer, but he's broken out of wizard prison and he's on the run".[13]

On 1 September 1994, the Weasleys and Harry travelled to King's Cross Station via Muggle taxis.[6]

Once the Hogwarts Express arrived at Platform 9¾ in June 1995, Harry Potter gave his Triwizard earnings to Fred and George Weasley, before crossing the magical barrier and being picked up by Vernon Dursley.[14]

In 1995, the Weasleys, Nymphadora Tonks, Remus Lupin, Alastor Moody, and Sirius Black (in his Animagus form) took Harry to King's Cross Station on foot, as they had been staying at 12 Grimmauld Place in the Borough of Islington.[15] When Harry arrived at the station at the end of the school year in June 1996, he was joined by Alastor Moody, Nymphadora Tonks, Remus Lupin, Mr and Mrs Weasley, and Fred and George Weasley. The wizard group proceeded to threaten the Dursleys that if Harry was mistreated in any way, one of the Order of the Phoenix would be sent along.[16]

Harry and the Weasleys returned to the Platform on 1 September 1996, where they were joined by two grim-faced, bearded Aurors in dark Muggle suits, for Harry's protection. On the platform, Harry had a quick word with Arthur Weasley about his suspicions that Draco Malfoy was now a Death Eater.[17]

On 1 September 2008, a new student arrived at the platform under Harry Potter's guidance and aboarded the Hogwarts Express.[18]

On 1 September 2017, Harry Potter took his sons (Albus Severus and James Sirius) to King's Cross along with his wife Ginny and their youngest child and only daughter, Lily Luna. Ron and Hermione Weasley also did so, as did Draco and Astoria Malfoy. There were also many other families, such as several of the other Weasleys.[7] 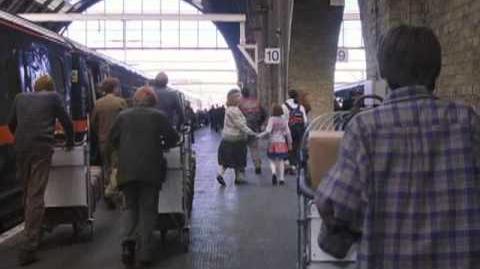 The Harry Potter Wiki has 62 images related to Platform Nine and Three-Quarters.

Deutsch Español Français Italiano Polski Português do Brasil Русский Українська
*Disclosure: Some of the links above are affiliate links, meaning, at no additional cost to you, Fandom will earn a commission if you click through and make a purchase. Community content is available under CC-BY-SA unless otherwise noted.
Advertisement