"As there is little foolish wand-waving here, many of you will hardly believe this is magic. I don't expect you will really understand the beauty of the softly simmering cauldron with its shimmering fumes, the delicate power of liquids that creep through the human veins, bewitching the minds, ensnaring the senses... I can teach you how to bottle fame, brew glory, and even stopper death - if you aren't as big a bunch of dunderheads as I usually have to teach."
—Professor Snape's introduction of the subject[src]

Potions is a core class and subject taught at Hogwarts School of Witchcraft and Wizardry and Ilvermorny School of Witchcraft and Wizardry. In this class, students learn the correct way to brew potions. They follow specific recipes and use various magical ingredients to create the potions, starting with simple ones and moving to more advanced ones as they progress in knowledge. A standard potions kit includes plant ingredients such as Belladonna and supplies such as glass phials and weighing scales, along with a standard cauldron that all students are expected to bring with them to lessons.[1]

The Professor of this subject is referred to as a Potions Master.[1] The Potions Master at Hogwarts for many years was Horace Slughorn[3] and later Severus Snape. By 2016, Professor Slughorn had retired for a second time, and an unidentified teacher had taken over.

"When they arrived in the corridor they saw that there were only a dozen people progressing to N.E.W.T. level."
—Harry Potter on the very few people who were able to advance[src]

At Hogwarts School of Witchcraft and Wizardry, Potions is a required subject for students, from first year to fifth year. Potion recipes can be found in many books, including the books the students at Hogwarts use in their classes, but the intricacies of timing, ageing, stirring techniques, and bottling which are much more difficult to learn without the mentoring of the experienced masters. Certain ingredients can be found in the cupboard in the classroom, but others have to be bought before the start of the year at the apothecary. Around 1981, Severus Snape became the professor of Potions at Hogwarts. Snape served as the school's potions professor through 1996, until he became the DADA professor and was replaced by Horace Slughorn.[4]

When Severus Snape was the professor, students had to achieve an 'Outstanding' on their O.W.L. in order to take his advanced class.[5] As Head of House, Professor Snape tended to favour students from Slytherin House more than other students, so Slytherins tended to do better than others at the subject. On the other hand however, Horace Slughorn was more lenient; Harry and Ron were both allowed to continue to the N.E.W.T. class with an 'Exceeds Expectations' O.W.L. He also did not grant Slytherins special treatments, thus having them lose their advantage in good classwork.[4]

"Snape made them all nervous, breathing down their necks while they tried to remember how to make a Forgetfulness Potion."
—First year exam in 1992[src]

Besides potions and their ingredients, other information is covered in the first year as well. Students are informed of the basic details on preparation of the Draught of Living Death, such as what would be created if powdered root of asphodel was added to an Infusion of Wormwood and the difference between Monkshood and Wolfbane.[1] The class also covers the twelve uses of dragon blood,[7] the types of cauldrons, and the types of phials used in potion-making. Bezoars[1] are briefly mentioned and the standard ingredient is also discussed and often used.[8]

Second year students are set an essay on Flobberworm Mucus and its uses in potions.[13] Also homework includes something that involves Hair-Raising Potions.[14] This year appears to focus more on actual potion brewing then the previous one.

Third year students learn about Undetectable Poisons and are instructed to write an essay on Shrinking Solutions.

Fourth year lessons includes information on Poison Antidotes. It is unknown what type of poison these potions refer to, common or uncommon. Also, this lesson is most likely a theoretical one. Mixing antidotes is complex and advanced, which are also covered in the sixth year as well as this one.

"I think it appropriate to remind you that next June you will be sitting a important examination, during which you will prove how much you have learned about the composition and use of magical potions."
—Professor Snape regarding the Potions O.W.L.[src]

Fifth year homework includes writing an essay on the properties of Moonstone and its uses in Potion making[6] and to write an essay on how to properly brew the Strengthening Solution.[34] Also potions and other classwork this year is O.W.L.- level in preparation for the upcoming exam.[6]

"...These are the kind of things you ought to be able to make after after completing your N.E.W.T.s."
—Professor Slughorn referring to the potions that will be covered in sixth and seventh year[src]

In sixth year, Golpalott's Third Law is covered in class. The Law appears to say that the antidote for a blended poison cannot simply be created by finding the antidotes to each separate poison in the blended whole and mixing them together.[43] Students have to write an essay on Everlasting Elixirs, using their textbooks Advanced Potion-Making as a source of information.[44]

One Thousand Magical Herbs and Fungi by Phyllida Spore

Merula Snyde[46]
Add a photo to this gallery 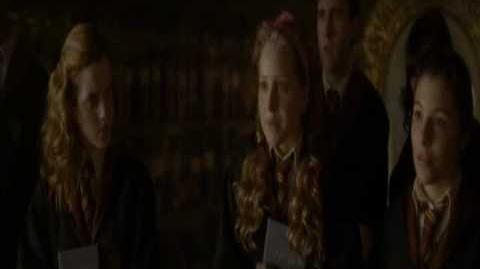 Chemistry was my least favourite subject at school, and I gave it up as soon as I could. Naturally, when I was trying to decide which subject Harry's arch-enemy, Severus Snape, should teach, it had to be the wizarding equivalent. This makes it all the stranger that I found Snape's introduction to his subject quite compelling ('I can teach you to bottle fame, brew glory, even stopper death...'), apparently part of me found Potions quite as interesting as Snape did; and indeed I always enjoyed creating potions in the books, and researching ingredients for them. Many of the components of the various draughts and libations that Harry creates for Snape exist (or were once believed to exist) and have (or were believed to have) the properties I gave them. Dittany, for instance, really does have healing properties (it is an anti-inflammatory, although I would not advise Splinching yourself to test it); a bezoar really is a mass taken from the intestines of an animal, and it really was once believed that drinking water in which a bezoar was placed could cure you of poisoning.[8]

Retrieved from "https://harrypotter.fandom.com/wiki/Potions_(class)?oldid=1352094"
*Disclosure: Some of the links above are affiliate links, meaning, at no additional cost to you, Fandom will earn a commission if you click through and make a purchase. Community content is available under CC-BY-SA unless otherwise noted.