"The hedge had grown wild in the sixteen years since Hagrid had taken Harry from the rubble that lay scattered amongst the waist-high grass. Most of the cottage was still standing, though entirely covered in the dark ivy and snow, but the right side of the top floor had been blown apart; that, Harry was sure, was where the curse had backfired."
— Description[src]

The Potter cottage was the home of the Potter family until the final months of the First Wizarding War. It was a deselect little cottage located in the village of Godric's Hollow in West Country.[4] Bathilda Bagshot's cottage was located nearby.

When a prophecy concerning Harry's defeat of Lord Voldemort was foretold, a Fidelius Charm was placed on the home by Albus Dumbledore when the Dark Lord marked the family for death as a result.[5]

On the night of 31 October, 1981, Voldemort showed up to murder them, but was defeated when his Killing Curse meant for Harry rebounded on him and a large portion of the cottage was destroyed. The cottage has thenceforth been undisturbed and left in its ruined state.[6]

It was known to be a comfortably sized, two story building with a small gate and hedges surrounding the front yard. Harry's bedroom was located on the first floor, close to the staircase in the living room. Harry's bedroom had a Magic Alphabet hanging on the wall.

Following Voldemort's attack on the cottage, Harry's room was blown apart by Voldemort's backfiring killing curse. The cottage was left in its ruined state as a testament to the violence of the First Wizarding War, and to the lives lost there.[6]

James and his Muggle-born wife Lily Evans used the house as a hiding place from Lord Voldemort when he marked them and their infant son Harry for death.

The small family also had a cat that lived with them at the time. It is unknown what happened to the cat.[3] After James and Lily were murdered the cottage remained empty, with no one else living in it.[4]

After a prophecy was made by Sybill Trelawney concerning the birth of one who would be able to defeat Lord Voldemort, Albus Dumbledore had the Potters go into hiding after being warned of Voldemort's intentions by then-Death Eater Severus Snape.[5]

A Fidelius Charm was placed on the house, with Sirius Black chosen as Secret-Keeper; this meant that the house and its occupants couldn't be found even if Voldemort "had his nose pressed against their sitting-room window". However, a last-minute decision was made to make Peter Pettigrew Secret-Keeper instead, as it was believed he would be less obvious to the Death Eaters. Unfortunately, neither the Potters nor Sirius knew that Pettigrew had in fact betrayed the Order of the Phoenix and turned spy for Voldemort.[7]

Murder of the Potters

"All anyone knows is, he turned up in the village where you was all living, on Hallowe'en ten years ago. You was just a year old. "
— Overview of Voldemort entering Godric's Hallow[src]

After learning the whereabouts of the Potter family from Pettigrew, Voldemort travelled to Godric's Hollow on the night of 31 October, 1981. With its magical protections broken, Voldemort was able to find it easily and blasted the front door open, catching its inhabitants off-guard. James, whom had left his wand on the sofa was murdered quickly, trying to defend his family. After Voldemort murdered James he preceded up the stairs to infant Harry's nursery where mother and son were trapped inside.[6]

Cornered in the nursery, Lily refused to step aside for Voldemort, and was murdered as well, the green light from this act actually lighting up the entire upper floor. When the Dark Lord then attempted to murder the one prophesied to defeat him, the protection laid down by his mother's loving sacrifice caused the Killing Curse to rebound, destroying Voldemort's corporeal body but unfortunately also taking out a significant chunk of the cottage's upper floor.

"She may have taken you grudgingly, furiously, unwillingly, bitterly, yet still she took you, and in doing so, she sealed the charm I placed upon you. Your mother's sacrifice made the bond of blood the strongest shield I could give you."
— Dumbledore explaining the Bond of blood charm[src]

Dumbledore had placed a charm on the house that alerted him immediately to James and Lily's deaths.[8] Sirius Black and Rubeus Hagrid discovered Harry still alive inside the ruined house within his crib. Harry was taken by Rubeus Hagrid by the request of Dumbledore, to the care of his maternal relatives, the Dursley family.[7] He spent the next ten years without any knowledge of his wizarding heritage and was treated poorly by his aunt and uncle, Petunia and Vernon Dursley.

Dumbledore believed Harry would benefit from being with blood relatives in order to preserve the protection his mother gave him with her death. While Hagrid took Harry to the Dursleys, Black went after Pettigrew with the intention of killing him.[7] Pettigrew outsmarted Sirius, cut off his own finger, framed Black for murder, and killed twelve Muggles when he blowup a street during his escape.[7]

"On this spot, on this night of 31 October 1981, Lily and James Potter lost their lives. Their son, Harry, remains the only wizard ever to have survived the Killing Curse. This house, invisible to Muggles, has been left in its ruined state as a monument to the Potters and as a reminder of the violence that tore apart their family."
— Harry Potter reading the sign outside the cottage[src]

This house was visited again by Harry on Christmas Eve, 1997, along with Hermione Granger. It had been left in its ruined state and made invisible to Muggles, as a monument to the Potters and to Voldemort's first downfall. By this time, nature had largely reclaimed it with ivy covering most of the surviving portions and the lawn having grown out of control.[4]

Wizard visitors could observe a memorial sign with a message in golden letters explaining this fact. A number of visitors had written on the sign, either signing their names in Everlasting Ink, carving their initials, or leaving messages, including a number addressed directly to Harry Potter expressing their support for him. Some of these messages included: "long live Harry Potter", "if you read this, Harry, we're all behind you!", and "good luck, Harry, wherever you are". Hermione initially expressed her discomfort with the graffiti, though Harry found the sixteen years' worth of supportive messages comforting.[4]

It is probable that the house remained in its ruined state after the Second Wizarding War. It is known that Harry Potter and his wife Ginny Weasley did not live in Godric's Hollow after their marriage.[9] 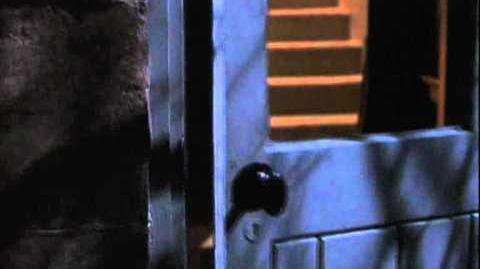 Español Français Polski
*Disclosure: Some of the links above are affiliate links, meaning, at no additional cost to you, Fandom will earn a commission if you click through and make a purchase. Community content is available under CC-BY-SA unless otherwise noted.
Advertisement