"Petrified, he watched as Quirrell reached up and began to unwrap his turban. What was going on? The turban fell away. Quirrell's head looked strangely small without it. Then he turned slowly on the spot. Harry would have screamed, but he couldn't make a sound. Where there should have been a back to Quirrell's head, there was a face, the most terrible face Harry had ever seen. It was chalk white with glaring red eyes and slits for nostrils, like a snake."
—The thing behind Quirrell's turban[src]

This purple turban was worn by Professor Quirinus Quirrell, during the 1991–1992 school year, in order to conceal Lord Voldemort's possession of him that year. [2]

"His turban, he told them, had been given to him by an African prince as a thank-you for getting rid of a troublesome zombie, but they weren't sure they believed this story. For one thing, when Seamus Finnigan asked eagerly to hear how Quirrell had fought off the zombie, Quirrell went pink and started talking about the weather; for another, they had noticed that a funny smell hung around the turban, and the Weasley twins insisted that it was stuffed full of garlic as well, so that Quirrell was protected wherever he went."
—Quirrell's strange decision to wear his turban[src]

He wore this turban to conceal the face of Lord Voldemort after the latter possessed him following the break-in of Gringotts Wizarding Bank in 1991. Quirrell's justification for wearing the turban was that an African prince had bestowed it upon him in gratitude for removing a troublesome zombie. The accuracy of this story is unknown, although it was most likely a deceptive fabrication. The turban possessed an odd smell most likely caused by Voldemort's face. This led to a misconception of Fred and George Weasley that the turban had been stuffed full of garlic to ward off hostile vampires.[1]

During the winter of the 1991–1992 school year, Fred and George Weasley bewitched several snowballs to follow Quirrell around and bounce off the back of his turban, not realising that by doing so they were hitting Voldemort in the face, for which they were given detention for.[3]

The turban would have only been used until Voldemort got the Elixir of Life and achieved a body of his own. Near the end of Quirrell's life, he took off the turban when Voldemort instructed, in front of Harry Potter, so the Dark Lord may reveal himself to the boy.[2]

Quirrell removing the turban, as illustrated by Mary GrandPré 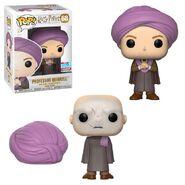 Quirrell/Voldemort with his turban, as a POP! Vinyl figure
Add a photo to this gallery

Retrieved from "https://harrypotter.fandom.com/wiki/Quirinus_Quirrell%27s_turban?oldid=1409682"
*Disclosure: Some of the links above are affiliate links, meaning, at no additional cost to you, Fandom will earn a commission if you click through and make a purchase. Community content is available under CC-BY-SA unless otherwise noted.