Raid on the Hogwarts Express

Hogwarts Express while en route to Hogwarts Castle, in Scotland

The Death Eaters want to know where Harry Potter is.

Shortly after the Death Eater take-over of the Ministry of Magic, they conducted a raid on the Hogwarts Express in order to capture Harry Potter. Three male Death Eaters stopped the train while en route to Hogwarts Castle, in Scotland on 1 September, 1997, but found nothing but other Hogwarts students, as Harry Potter, Ron Weasley, and Hermione Granger were (at the time) in hiding at 12 Grimmauld Place.

Remus Lupin: "Effectively, [Voldemort] is the Minister, but why should he sit behind a desk at the Ministry? His puppet, Thicknesse, is taking care of everyday business, leaving Voldemort free to extend his power beyond the Ministry. Naturally many people have deduced what has happened: There has been such a dramatic change in Ministry policy in the last few days, and many are whispering that Voldemort must be behind it. […] "
Harry Potter: "And this dramatic change in Ministry policy involves warning the Wizarding world against me instead of Voldemort?"
— Remus Lupin and Harry Potter while the latter was in hiding at 12 Grimmauld Place[src]

During the height of the Second Wizarding War, on 1 August, 1997, Lord Voldemort's Death Eater managed to stage a "smooth and virtually silent" coup at the Ministry of Magic, by Imperiusing several high-ranking Ministry officials. Minister Rufus Scrimgeour was killed, and replaced by the Head of the Department of Magical Law Enforcement, Pius Thicknesse, who was under Death Eater control.[1]

There was a "dramatic change" in Ministry policy following the coup, so that it followed the Death Eaters ideology. Harry Potter, "The Boy Who Lived", was (under the premise of involvement in Albus Dumbledore's murder) decreed "Undesirable No. 1"[1], the price on his head and wand reached, in late March of 1998, two-hundred thousand Galleons.[2]

"My father will hear about this!"
—Cormac McLaggen trying to scare the Death Eaters[src]

On 1 September, 1997, three male Death Eaters Apparated onto the railway tracks as the Hogwarts Express made its way through the British countryside heading towards Hogwarts Castle. One of them stopped the train with a wandless spell, then they boarded the student carriages. Crossing the aisles of the carriages, the Death Eaters were subject of the students stares and the Cormac McLaggen's foolish comment "My father will hear about this", which they ignored. As they reached the end of the train, Neville Longbottom stood to face them, calling them losers and stating that, given the situation, Harry was not there going to Hogwarts.[3] 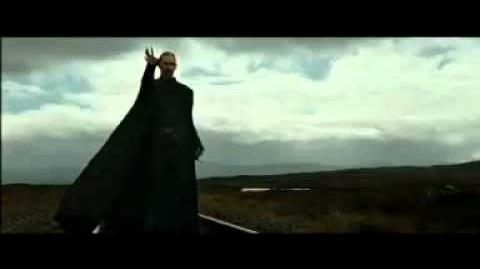 Retrieved from "https://harrypotter.fandom.com/wiki/Raid_on_the_Hogwarts_Express?oldid=1256214"
*Disclosure: Some of the links above are affiliate links, meaning, at no additional cost to you, Fandom will earn a commission if you click through and make a purchase. Community content is available under CC-BY-SA unless otherwise noted.