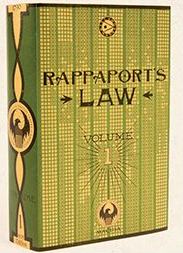 Rappaport's Law was an American wizarding law enacted by President Emily Rappaport in 1790 in response to the fallout of Dorcus Twelvetrees's breach of the International Statute of Secrecy.[1] It was eventually repealed in 1965.[2]

The law was intended to create absolute segregation between the No-Maj and wizarding communities. It banned witches and wizards from marrying or befriending No-Majs, allowing only interactions "necessary to perform daily activities", and meted out "harsh" penalties for fraternisation with No-Majs.[1] To ensure complete conformity with the Law, only upon reaching the age of majority (seventeen) would a witch or wizard be legally allowed to carry a wand outside school: wands were issued when students first arrived at Ilvermorny School of Witchcraft and Wizardry and had to be left at school during vacations.[2]

Rappaport's Law had the long-term consequence of driving the American wizarding community even deeper underground and widening the cultural divide between the wizarding communities of the United States and Europe. In Europe, wizarding governments clandestinely cooperated and communicated with their Muggle counterparts, and witches and wizards were free to marry and befriend Muggles.

However, in the United States, the Magical Congress of the United States of America exercised complete independence from the No-Maj government, and wizards and witches increasingly came to view the country's No-Maj population with hostility. The law also required all wizards in America to apply for and carry a wand permit, so as to keep track of magical activity and keep track of wizards who use magic against the limits set by the law.[1]

In 1790, the law was enacted at the order of Emily Rappaport, then President of the MACUSA.

In 1926, Queenie Goldstein met No-maj Jacob Kowalski when the pair, and Queenie's sister Tina, became involved with Magizoologist Newt Scamander's search the magical creatures that escaped from his suitcase. At the end of their adventure, Jacob's memory of it was erased but Queenie, who had become attracted to him, later visited Jacob at his bakery. Seeing her again triggered his memories, and the couple began a relationship.

By 1927, they had discussed marriage but were unable to wed due to Rappaport's Law. Jacob was reluctant to openly defy the law, fearing the potential consequences for his fiancée, however she wanted to marry regardless, even going so far as to entrance him to get him to agree. This gambit failed due to Newt's intervention. The promise of the freedom offered by the repeal of the Statute of Secrecy and, by extension, Rappaport's Law, eventually led Queenie to join Gellert Grindelwald's revolution.

Rappaport's Law was repealed in 1965.

Deutsch Español Français Italiano 日本語 Nederlands Polski Português do Brasil Русский 中文
*Disclosure: Some of the links above are affiliate links, meaning, at no additional cost to you, Fandom will earn a commission if you click through and make a purchase. Community content is available under CC-BY-SA unless otherwise noted.
Advertisement