Abnormal growth of the rat if too much is drunk[2]

Green-coloured[1]
A Rat tonic is a healing potion for rats. It is used to treat ageing rats. It is sold in a small red bottle at the Magical Menagerie in Diagon Alley.[1]

When Ron Weasley took his pet rat Scabbers to the Magical Menagerie because he looked ill, the witch behind the counter suggested Rat Tonic. Before Ron could pay, Scabbers was attacked and chased out of the shop by Crookshanks. Ron and Harry Potter followed. Hermione Granger stayed at the shop to buy Crookshanks and the Rat Tonic, which she later passed on to Ron.[1] 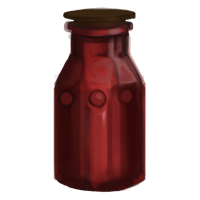 Cite error: <ref> tags exist, but no <references/> tag was found
Retrieved from "https://harrypotter.fandom.com/wiki/Rat_tonic?oldid=1285018"
*Disclosure: Some of the links above are affiliate links, meaning, at no additional cost to you, Fandom will earn a commission if you click through and make a purchase. Community content is available under CC-BY-SA unless otherwise noted.