Baruffio's Brain Elixir[2]
Runespoor eggs were produced through the mouth of a Runespoor, and was the only magical beast known to produce eggs in such a manner.[1] The eggs were known to stimulate mental agility, and as such, were used as potion ingredients,[1] such as in the questionable Baruffio's Brain Elixir,[2] and they flourished on the black market for several centuries.[1] 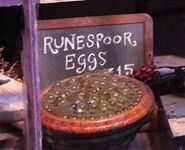 Retrieved from "https://harrypotter.fandom.com/wiki/Runespoor_egg?oldid=1417725"
*Disclosure: Some of the links above are affiliate links, meaning, at no additional cost to you, Fandom will earn a commission if you click through and make a purchase. Community content is available under CC-BY-SA unless otherwise noted.