Koldovstoretz
Russia is the largest country in the world by size; extending from Eastern Europe to the Bering Strait and Pacific Ocean, the country stretches across the entire breadth of the continent of Asia.

A delegate from Russia was member of the International Confederation of Wizards, and participated in the meeting held at the Magical Congress of the United States of America on 6 December 1926.[1]

Sometime in the 2010s, the Statute of Secrecy Task Force had to return a Hag to Russia that had be trapped by a Confoundable caused by the Calamity.[2]

Koldovstoretz was the Russian School of Witchcraft and Wizardry. Russian wizards and witches may also have had the option to attend Durmstrang Institute as it accept students from all over Northern and Eastern Europe as long they are of wizarding heritage.

The following creatures are native to Russia: 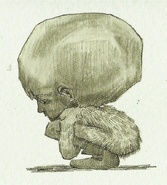