The trio are caught by Snatchers after Harry breaks the Taboo on Voldemort's name.[2]

The trio acquires location of an additional Horcrux and Harry unknowingly gains mastery of the Elder Wand.

"Harry Potter, Dobby has come to rescue you."
— Dobby's bravery and loyalty to Harry Potter[src]

This skirmish was a small but bloody skirmish of the Second Wizarding War that took place around Easter of 1998 in Malfoy Manor, located in Wiltshire, England.[2]

The skirmish resulted in several prisoners being freed from the dungeons of the Death Eaters' headquarters and in Harry Potter, Hermione Granger, and Ron Weasley discovering the location of one of Lord Voldemort's Horcruxes. There were at least two casualties — Peter Pettigrew and Dobby the house-elf.[2]

"Come out of there with your hands up! We know you're in there! You've got half a dozen wands pointing at you and we don't care who we curse!"
— The trio was caught by Snatchers and Greyback[src]

By the spring of 1998, Voldemort was in control of the Ministry of Magic and had Snatchers prowling the country in search of Muggle-borns, blood traitors and Undesirable Number One, Harry Potter. Harry, Ron Weasley, and Hermione Granger were secretly hunting down Voldemort's Horcruxes in an effort to make him mortal and defeat him once and for all.

Harry accidentally triggered the Taboo curse on Voldemort's name, and he and his friends were immediately surrounded[3] by a gang of Snatchers led by Fenrir Greyback. Greyback and his gang had already captured Dean Thomas and goblin Griphook and killed Ted Tonks, Dirk Cresswell and Gornuk. Thinking fast, Hermione used a Stinging Hex on Harry's face in an attempt to disguise his identity.[2]

The three were disarmed and questioned on their identities. Harry, thinking quickly, claimed that he was "Vernon Dudley", the son of a Ministry employee, and a Slytherin, a claim he was able to back up because he knew where the Slytherin common room was from having been there in his second year. Ron said he was "Stan Shunpike", but the Snatchers knew he was lying and punched him in the face; Ron then claimed he was "Barny Weasley". Hermione told them she was "Penelope Clearwater" and a half-blood. They claimed that using the Dark Lord's name was an accident and that they did not know what the Order of the Phoenix was.[2]

Their story may have been believed, but Hermione's picture was in Daily Prophet, which described her as "the Mudblood who is known to be travelling with Harry Potter". Greyback decided not to take them to the Ministry, thinking that they would "take the credit". As he desired the monetary reward and to bite Hermione, he decided to bring them to Malfoy Manor, where someone with the Dark Mark could call Voldemort directly.[2]

Lucius Malfoy: "Well, Draco? Is it? Is it Harry Potter?"
Draco Malfoy: "I can't — I can't be sure."
— Lucius urging Draco to identify Harry Potter[src]

When the group arrived at Malfoy Manor, they were greeted by a disdainful Narcissa Malfoy, who let them in and called her son Draco, who was home from Hogwarts for the Easter holidays, to identify the prisoners. Lucius Malfoy was also there and was visibly excited at the prospect of being the one to hand Harry over to Voldemort, in the hope it would redeem him in the Dark Lord's eyes.[2]

Draco was extremely reluctant to identify any of them, despite Ron and Hermione's identities, at least, being obvious. Bellatrix Lestrange came upon the scene at that moment and briefly argued with her brother-in-law Lucius over who would be the one to signal Voldemort, but stopped when she spotted Godric Gryffindor's Sword among the seized possessions of the prisoners.[2]

Bellatrix Lestrange: "Wait. All except... except for the Mudblood."
Ron Weasley: "No! You can have me, keep me!"
Bellatrix Lestrange: "If she dies under questioning, I'll take you next. Blood traitor is next to Mudblood in my book. Take them downstairs, Greyback, and make sure they are secure, but do nothing more to them — yet."
— Bellatrix isolating Hermione for interrogation[src]

Bellatrix screamed at Lucius not to touch his Dark Mark, saying that they would "all perish if the Dark Lord comes now". She demanded to know where the Snatchers got the Sword and then stunned four of them in rapid succession for their "lack of respect" towards her. She ordered her nephew to move the unconscious men to the courtyard and implied that she might kill them later. She then ordered Greyback to take all the prisoners down to the dungeons — except for Hermione.[2]

Harry, Ron, Dean and Griphook were shut into the dungeons in the cellar just as Bellatrix began to torture Hermione with repeated use of the Cruciatus Curse while questioning her about how she and her friends obtained Gryffindor's Sword, which Bellatrix had believed to be in her vault in Gringotts. Ron had the worst reaction to hearing Hermione's screams. He struggled against the ropes binding him, and screamed her name. When he was freed, Ron attempted to disapparate without a wand. He failed, and began to pound on the wall and sob.[2]

"Help us! We're in the cellar of Malfoy Manor, help us!"
— Harry screaming for help into his two-way mirror[src]

Luna Lovegood and Garrick Ollivander were also in the cellar, having been imprisoned because of Xenophilius Lovegood's public support of Harry and for knowledge of wands, respectively. Luna helped cut the new prisoners's bonds using a nail. Harry could hear Hermione screaming from above, and frantically searched the pouch around his neck for help. A piece of the mirror Sirius Black had given him fell to the floor, and Harry saw a blue eye — later identified as Aberforth Dumbledore's — and screamed for help.[2]

In the meantime, Hermione managed to lie under torture and claimed that the sword was a copy. To confirm this story, Bellatrix sent Draco to fetch Griphook, who would be able to tell if the sword was genuinely goblin-made. Harry begged Griphook to tell them it was a fake, and just after the goblin was taken upstairs by Draco, Dobby, the house-elf, appeared in the dungeon using house-elf Apparition. Harry ordered him to take Luna, Mr Ollivander and Dean to Shell Cottage, the home of newlyweds Bill Weasley and Fleur Delacour, Ron's brother and sister-in-law.[2]

While this was all happening, Harry saw a vision of Voldemort at Nurmengard, asking Gellert Grindelwald where the Elder Wand was. However, when Dobby returned to the cellar, the sound of his apparition was heard. Peter Pettigrew was sent to investigate the noise. When he arrived, Harry and Ron tackled him and Ron forcefully disarmed Pettigrew. Pettigrew started to strangle Harry, but Harry reminded him that he owed him his life, as Harry once saved Pettigrew's life. He slackened his grip, and his own silver hand promptly strangled him to death for his moment of pity, despite Harry and Ron's efforts to prevent it.[2]

Just then, Griphook lied to Bellatrix, saying that the sword was a fake, and she pressed her Dark Mark. Voldemort murdered Grindelwald when Bellatrix summoned him, so he could travel to Malfoy Manor.[2]

"Hoisting the groaning goblin, who still clung to the sword, over one shoulder, Harry seized Dobby's hand and spun on the spot to Disapparate. As he turned into darkness he caught one last view of the drawing room... Bellatrix's knife flew across the room at the place where he was vanishing —"
— The trio escaping the manor before Voldemort arrived[src]

Just as Bellatrix was about to hand Hermione, who had been tortured into unconsciousness, over to Greyback, Harry and Ron burst in. Ron disarmed Bellatrix, using Pettigrew's wand. Harry stunned Lucius, who did not have a wand to repel the spell, and then rolled behind a sofa to avoid spells from Narcissa, Draco and Greyback. Bellatrix then held her short knife to Hermione's throat in threat, and Harry and Ron surrendered their wands to Draco.[2]

However, Dobby returned and sent the crystal chandelier falling to the floor. Bellatrix released Hermione to jump out of the way and Draco's face was scratched by the flying debris. Ron rescued Hermione from the wreckage, and Harry disarmed Draco by wresting the three wands he was holding from him. Harry used all the wands together to stun Greyback. Dobby disarmed Narcissa before she could curse anyone.[2]

Harry threw Ron a wand, and he Disapparated with Hermione to Shell Cottage. Harry then grabbed Dobby and Griphook, who was holding the Sword, and followed. Bellatrix, however, threw her knife at them as they vanished, and the knife struck Dobby in the chest.[2]

"Harry, what the hell's going on? You turn up here with a dead house-elf and a half-conscious goblin, Hermione looks as though she's been tortured, and Ron's just refused to tell me anything —"
— Bill Weasley questioning the trio's unusual arrival[src]

Harry arrived at Shell Cottage to find, to his horror, that Dobby was dying. Dobby died in Harry's arms his last words being "Harry... Potter". He subsequently buried the elf in the garden by hand, with the epitaph Here Lies Dobby, a Free Elf. As he dug, he got glimpses of Voldemort furiously punishing Bellatrix and the Malfoys for their failure to capture him, but he did not care, as his grief for Dobby blocked out everything else. After Fleur assisted in healing Hermione and Griphook, they gathered around the grave to give their farewells and thanks to the house elf.[4]

Griphook: "As the Dark Lord becomes ever more powerful, your race is set still more firmly above mine! Gringotts falls under Wizarding rule, house-elves are slaughtered, and who amongst the wand-carriers protests?"
Hermione Granger: "We do! We protest!"
— Hermione trying to persuade Griphook to help them[src]

The Death Eaters' discovery that Ron Weasley was with Harry and Hermione — instead of sick with spattergroit at home, as had been previously claimed — made his family a target. The Weasleys fled the Burrow and were no longer able to go to work. Bill was the Secret-Keeper for Shell Cottage while Arthur acted as the Secret-Keeper for Muriel's home, where the other Weasleys stayed.[4][5]

Harry, Hermione, and Ron then spoke to Griphook, persuading him to help them break in to Gringotts and steal the Horcrux in Bellatrix Lestrange's vault by agreeing to give him Godric Gryffindor's Sword in exchange.[5]

Afterward, the trio spoke to Garrick Ollivander, who told them about the Elder Wand. Harry realised that Voldemort had gone to Hogwarts to take the wand from Albus Dumbledore's tomb, but decided to focus on getting the Horcruxes, not the Deathly Hallows, per Dumbledore's instructions. He, Ron and Hermione spent the rest of their stay at Shell Cottage planning the break-in of Gringotts.[4] With Griphook's help, they would eventually obtain Helga Hufflepuff's Cup.[6]

Mastery of the Elder Wand

"So it all comes down to this, doesn't it? Does the wand in your hand know its last master was disarmed? Because if it does...I am the true master of the Elder Wand."
— Harry to Voldemort in the last moments of their final duel[src]

This battle would also prove critical in Lord Voldemort's final defeat in another way — when Harry disarmed Draco Malfoy, he unknowingly obtained the loyalty of the Elder Wand, just as Draco had unknowingly become its master when he disarmed Albus Dumbledore a year earlier. Thus, when he faced off against Voldemort during the Battle of Hogwarts weeks later, the wand refused to harm its true master, and Voldemort was killed by his own rebounding Killing Curse.[7] 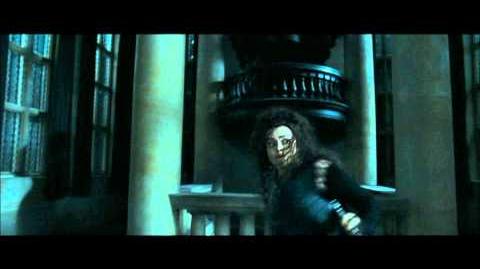 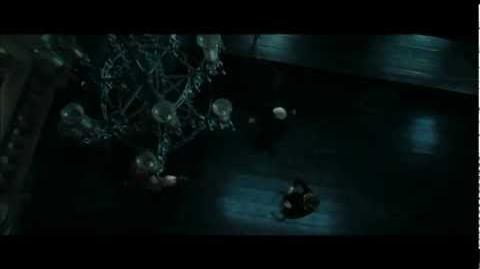