"The ceiling and walls had been draped with emerald, crimson and gold hangings, so that it looked as though they were all inside a vast tent. The room was crowded and stuffy and bathed in the red light cast by an ornate golden lamp dangling from the centre of the ceiling in which real fairies were fluttering, each a brilliant speck of light. Loud singing accompanied by what sounded like mandolins issued from a distant corner; a haze of pipe smoke hung over several elderly warlocks deep in conversation, and a number of house-elves were negotiating their way squeakily through the forest of knees, obscured by the heavy silver platters of food they were bearing, so that they looked like little roving tables."
— Description of the party[src]

A Christmas party was hosted by Professor Horace Slughorn on the evening of 20 December, 1996[2] in his office in Hogwarts School of Witchcraft and Wizardry for his favourite students, the Slug Club and their dates, as well as former club members and various other associates.[1]

Harry Potter, Slughorn's most welcomed guest, overheard a strange conversation between Professor Severus Snape and student Draco Malfoy during the party that made him suspect that they were conspiring on behalf of Lord Voldemort.[1]

"Anyway, Slughorn's going to have a Christmas party, Harry, and there's no way you'll be able to wriggle out of this one because he actually asked me to check your free evenings, so he could be sure to have it on a night you can come."
— Hermione Granger to Harry Potter about the Christmas party[src]

Horace Slughorn returned to Hogwarts School of Witchcraft and Wizardry from retirement for the 1996–1997 school year, and resumed his former position as Potions Master. He immediately began identifying students who were famous, well-connected, or particularly talented in order to form an association of favourites. known as the Slug Club.[3] Slughorn liked to hold dinners with these students and cultivate their talents, in the hopes that someday they would fulfil the potential he saw in them and be valuable connections.[4]

As the famous “Boy Who Lived”, Harry Potter immediately attracted Slughorn’s attention. Harry, however, always found excuses to avoid the meetings, even using his position as Captain of the Gryffindor Quidditch team to schedule practises at the same time as the meetings. When planning his party for Christmas, Slughorn wanted to make sure that Harry would attend, and thus asked Hermione Granger, a member of the Slug Club and Harry’s friend, when he would be available.[4]

Ron: "Slug Club. It's pathetic. Well, I hope you enjoy your party. Why don't you try hooking up with McLaggen, then Slughorn can make you King and Queen Slug —"
Hermione: "We're allowed to bring guests, and I was going to ask you to come, but if you think it's that stupid then I won't bother!... obviously if you'd rather I got off with McLaggen..."
Ron: "No, I wouldn't."
— Hermione Granger and Ron Weasley before the party[src]

When Hermione related this news to Harry and Ron Weasley, the former groaned in frustration, but Ron was irritated, as Professor Slughorn had ignored him entirely. Hermione interrupted his envious criticisms by asking if he would like to go with her, and Ron accepted, looking “sheepish but also rather pleased with himself”. Harry wondered to himself how this development would affect the trio’s dynamics, but the only difference was that Hermione and Ron were a little politer to each other than usual.[4]

Harry himself was not sure who to bring to the party. He had recently developed feelings for Ginny Weasley, but she was dating Dean Thomas, and Romilda Vane, who had a rather obsessive crush on him, repeatedly and heavily hinted that she would like him to ask her. In the meantime, Ron began treating Hermione coldly after his sister revealed that she had once kissed Viktor Krum, and even more so after Harry pretended to slip him Felix Felicis to help his Quidditch nerves; once Harry revealed the truth, Ron accused Hermione of having no faith in him, despite having believed it himself. This culminated in Ron snogging Lavender Brown at a party, which caused a hurt and jealous Hermione to conjure a flock of canaries to attack him. The two ceased being on speaking terms, and Ron began an exhibitionist relationship with Lavender.[4]

Soon afterwards, Hermione warned Harry that she had overheard Romilda Vane discussing plans to slip Harry a Love Potion with other girls, all of them hoping that he would ask them to the Christmas party. Hermione advised Harry to be careful and to invite someone to attend with him to discourage the girls’ plotting. When they left the library for the Gryffindor common room, Romilda immediately tried to give Harry Gillywater, and all but forced Chocolate Cauldrons on him, none of which he consumed.[1]

The next day, Harry asked Luna Lovegood to attend the party with him as a friend, because he found her comforting Hermione, after the latter ran off crying when Ron made fun of her. Peeves overheard their conversation, and immediately began spreading the news. At lunch that day, Hermione revealed in a conversation with Parvati Patil that she was attending the party with Cormac McLaggen, an older Gryffindor whom Ron despised, in retaliation for Ron's new relationship.[1]

The Christmas party began at eight o’clock in the evening on the 20 December and was held in Professor Slughorn’s office.[1]

Harry met Luna at the entrance hall, where other girls glared resentfully at him, and the two then headed for the party. Almost as soon as they entered, Slughorn came to greet Harry and dragged him off to introduce him to other guests, without acknowledging or saying a word to Luna.[1]

Slughorn first introduced Harry to author Eldred Worple and vampire Sanguini. When Worple tried to convince Harry to allow him to write a biography of him, Harry refused, and swiftly pulled Luna with him to find Hermione. She was relieved to see them, having just ditched Cormac McLaggen, who was very forward with her under the mistletoe.[1]

The three picked up glasses of mead and then ran into Professor Trelawney, who was inebriated and began complaining about having to share teaching Divination with Firenze. Hermione then spotted McLaggen looking for her, and ran off; Harry denied having seen her when McLaggen questioned him, and quickly turned back to Luna and Trelawney. Slughorn caught up with him again, praising his skill at Potions to Professor Snape, who regarded Harry with suspicion at Slughorn’s effusive praise, since Harry had never shown such talent in Potions before. He also sneered at Harry’s goal of becoming an Auror.[1]

This prompted Luna to break in, advising Harry not to become an Auror, as she believed that they were part of the Rotfang Conspiracy: an alleged plan to bring down the Ministry of Magic from within using Dark magic and gum disease. Harry laughed so hard at this that mead came out of his nose.[1]

At this point, Argus Filch dragged in Draco Malfoy, whom he had caught trying to gate crash, and who Harry noted looked pale and tired. Slughorn gave Draco permission to stay, but Snape quickly dragged him off for a private word. Harry told Luna he was going to the bathroom, and followed them.[1]

Snape: "Listen to me. I am trying to help you. I swore to your mother I would protect you. I made the Unbreakable Vow, Draco —"
Draco: "Looks like you'll have to break it, then, because I don't need your protection! It's my job, he gave it to me and I'm doing it, I've got a plan and it's going to work, it's just taking a bit longer than I thought it would!"
— Severus Snape and Draco Malfoy arguing[src]

Harry eavesdropped on a conversation in which Snape tried to offer Draco help with a mission Lord Voldemort had given him, admitting that he had made an Unbreakable Vow with Draco’s mother to protect him, but Draco refused his help. He accused Snape of trying to steal his glory; Snape replied that he was acting like a child. When he brought up the recent imprisonment of Draco’s father, Draco stormed off.[1]

Harry returned to the party afterwards, and learned from an irate McLaggen that Hermione had already left.[5]

Arthur: "Has it occurred to you, Harry, that Snape was simply pretending —?"
Harry: "Pretending to offer help, so that he could find out what Malfoy's up to? Yeah, I thought you'd say that. But how do we know?"
Remus: "It isn't our business to know. It’s Dumbledore's business. Dumbledore trusts Severus, and that ought to be good enough for all of us."
— Arthur Weasley and Remus Lupin on what Harry overheard[src]

Harry Potter had already been suspicious that Draco Malfoy was up to something, and mistrustful of Severus Snape in spite of his role as a spy for the Order of the Phoenix. While at the Burrow for the Christmas holidays, Harry repeated what he had heard to Ron, Arthur Weasley, and Remus Lupin. Arthur and Remus reminded him that Albus Dumbledore trusted Snape, who they assumed was trying to manipulate Draco in order to gain information. Upon his return to Hogwarts, Harry told Hermione what he had heard, and she agreed with the Order.[5]

Later in the school year, Ron ate the Love Potion-spiked Chocolate Cauldrons that Romilda Vane had given Harry in the hope that it would make him ask her to the Christmas party. This would lead to Ron's poisoning — which was one of Draco’s failed attempts to assassinate Dumbledore, and the plan he had refused to discuss with Snape.[6] 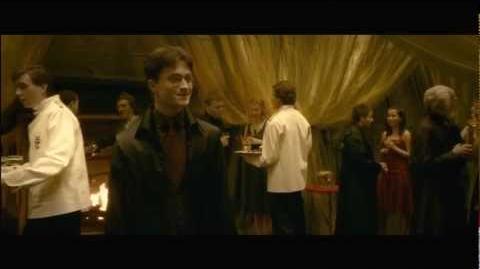