Contain outbreaks of magic being noticed by Muggles[2]

The Statute of Secrecy Task Force (SOS) was an international task force formed in response to the Calamity in partnership between the British Ministry of Magic and the International Confederation of Wizards to help contain outbreaks of magic from being noticed by Muggles. Members of this team were called Calamity Investigators.[2] 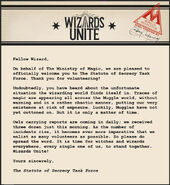 A SOS poster
Add a photo to this gallery

Retrieved from "https://harrypotter.fandom.com/wiki/Statute_of_Secrecy_Task_Force?oldid=1329590"
*Disclosure: Some of the links above are affiliate links, meaning, at no additional cost to you, Fandom will earn a commission if you click through and make a purchase. Community content is available under CC-BY-SA unless otherwise noted.